In the beginning of the 13th century, the town of Bardejov was known across Europe as a crucial intersection of important trade routes. Today those roads are gone, but Bardejov remains a small town very proud of its past, and its protection as a UNESCO World Heritage List site. A visitor can still appreciate much of the town’s ancient history, hemmed into a beautiful centre by thick stone walls. 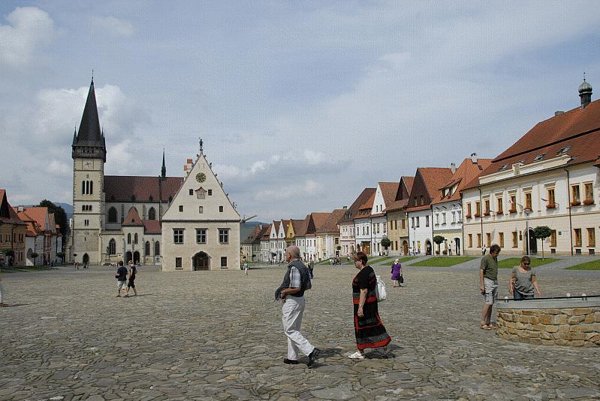 In the beginning of the 13th century, the town of Bardejov was known across Europe as a crucial intersection of important trade routes. Today those roads are gone, but Bardejov remains a small town very proud of its past, and its protection as a UNESCO World Heritage List site.
A visitor can still appreciate much of the town’s ancient history, hemmed into a beautiful centre by thick stone walls.

“There is no chance you won’t love Bardejov after seeing it,” said a middle-aged couple from South Wales, whose opinion is common. Everyone in the east of Slovakia would recommend three places to visit: Košice, Prešov and Bardejov.

Bardejov is one of the oldest towns in Slovakia, situated approximately half-way between the Black and Baltic Seas. The first mention of a village named Bardejov comes from 1241, but the village quickly grew into a town. Bardejov is subsequently mentioned in chronicles written in countless cities and countries because of the important visitors passing through. Many also stayed for business or to relax in its spa.

In the 14th century, Bardejov gained the status of a free royal town and received rights and privileges from several kings. Included among those privileges was the right to a town hangman - a rare and prestigious role - and Bardejov natives remain proud to this day of the well-preserved hangman’s house in the old centre of Bardejov. (It is not open to the public, but visitors can admire its external facade.)

In the 19th century, King Ludwig I commanded the construction of the fortified city walls and bastions. His decree is the main reason the historical centre of Bardejov is so well-preserved, and visitors can still walk along long portions of the mighty city walls.

All the town’s social life used to be, and still is, situated on the central market square, or Radničné Námestie, named after the town hall at its centre. This eye-catching construction was built in two parts. The Gothic-style ground floor formerly housed an indoor market, while the Renaissance first floor provided the offices of the mayor and town council. These days both floors comprise the Šariš Museum.

The most significant monument is the Basilica Minor of St Aegidius (St Giles), which dates from the 15th century and dominates the northern part of the town square. The basilica is packed with 11 original wing altars, including the most precious Altar of the Nativity of the Lord and the Altar of St Barbara, which features the Chair of Mercy Statue, probably the work of Master Pavol of Levoča.

Bardejov also earned the right to hold an annual fair, a tradition that still endures today. During the last weekend of August, the square is full of stalls of various goods. One of the most popular attractions at the fair is the “street of crafts” where visitors can watch people in folk costumes making carpets, pottery, jewelery, toys, glass vases or traditional Slovak meals.

“It’s really hard to hold onto your money when you can see so many products made by skilful people available to buy,” said one visitor named Anna, who has attended every fair for the past 35 years.
Bardejov also has a long Jewish history, which is characteristically much more chequered. Among the laws of the free royal town was the exclusion of Jews from the centre, forcing the Jewish community to build their homes and sacred places in a suburb outside the walls, but still close to the city.
The Jewish community still thrived, however, and in 1940, Jews comprised nearly 30 percent of Bardejov’s population and there were two synagogues, ritual baths, two schools, five prayer places, five charitable associations and two book printers in the town. But the horrors of the Holocaust hit Slovak Jews hard and today no Jews remain in the town.

Cyril Bogoľ describes himself as “the Protestant Jew” and has kept protective charge over the remaining Chevra Bikur Cholim synagogue since the death of his Jewish neighbour and friend.
“It is holy to the Jews, so it is holy to me,” Bogoľ said adding that his study of Jewish culture has been a profound education.

Bogoľ pays all maintenance costs for the building from his own pocket, or with the help of donors, and although the synagogue is not usually open for tourists, he will provide a guided tour on request. Entering the synagogue today - one of the few in Slovakia in almost original condition - can be a deep religious experience, especially as Bogoľ provides a commentary about the history and habits of the Jews. There is also another synagogue and a former bath building currently being renovated in Bardejov.

Further out of the town centre, Bardejovské Kúpele (Bardejov Spa) is also very popular among Slovaks, who have been drawn for centuries to its collection of beautiful buildings and healing springs set in the picturesque country. Although many of the buildings have grown tired over the years, and small reconstructions cannot match its heyday (when even Empress Elizabeth, the wife of Franz Joseph I, visited in the early 20th century) the healing waters remain on tap beckoning visitors from across the county.

1. Bardejov-Tarnov-Gaboltov-Cigeľka-Frička-Lukov-Bardejov (In Gaboltov there is a Holy Shrine. In Cigeľka you can taste the natural mineral water, which is beneficial to the digestive tract.)
2. Regetovka-Becherov-Ondavka-Nižná Polianka-Vyšný Mirošov-Nižný Mirošov-Roztoky-Dubová-Šarišské Čierne-Smilno-Chmeľová-Regetovka. (Around 40 km. You can see the beauty of the area’s wooden churches. In Nižná Polianka there is a natural swimming pool and an observatory in Roztoky).
3. Bardejov-Kružľov-Krivé-Richvald-Hervartov-Bardejov (Around 40 km. In Hervartov is the Gothic Church of St Francis of Assisi. It was built around 1500 and is one of the oldest wooden churches of this kind in Slovakia, and is on the UNESCO World Heritage List. To get into the church, you need to call or get a church administrator. All information can be found on the door of the church.)
4.Bardejov-Kobyly-Tročany-Raslavice-Abrahámovce-Marhaň-Porubka-Kučín-Kožany-Kurima-Dubinné-Bardejov. (On this road you can visit two wooden churches in Raslavice, the castle in Kurima, and a 700-year-old oak in Dubinné, where there is also opportunity to bathe and fish.)
5. Bardejov-Zborov-Regetovka-Becherov-Ondavka-Nižná Polianka-Jedlinka-Zborov-Bardejovské Kúpele-Bardejov (The route is very rich in historical and natural attractions. You can also take a break in Bardejov Spa for relaxation and cultural activities.)