THE DEPARTMENTS of education, health, environment and transport will be allowed a bigger bite of the public-finance cake next year compared to what they are getting in 2012. The department of defence, by contrast, will get less than 1 percent of the country’s gross domestic product (GDP) to spend in 2013. But while these budget titbits are interesting, they are of secondary significance when it comes to the European Union’s scrutiny of Slovakia’s draft state budget for 2013, as tabled by the Finance Ministry under Smer’s Peter Kažimír. 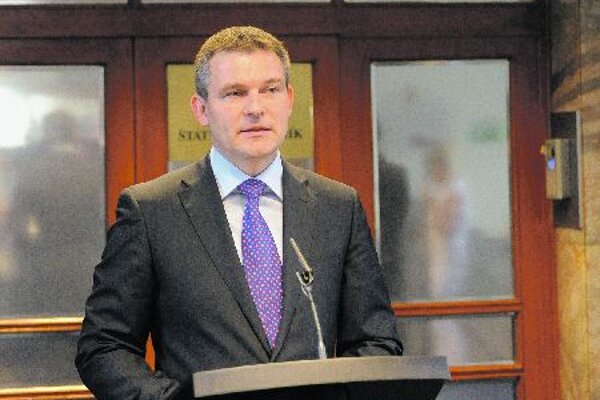 THE DEPARTMENTS of education, health, environment and transport will be allowed a bigger bite of the public-finance cake next year compared to what they are getting in 2012. The department of defence, by contrast, will get less than 1 percent of the country’s gross domestic product (GDP) to spend in 2013. But while these budget titbits are interesting, they are of secondary significance when it comes to the European Union’s scrutiny of Slovakia’s draft state budget for 2013, as tabled by the Finance Ministry under Smer’s Peter Kažimír.

More important is the fact that the government is sticking to its target of lowering the public-finance deficit to less than 3 percent of GDP in 2013. The budget foresees a deficit of €3.317 billion, with revenues at €13.6 billion and spending at €16.917 billion.

“The primary goal of the government in the sphere of consolidation of the public finances is squeezing the public-finance deficit to 2.9 percent of GDP in 2013 in a way that Slovakia keeps its obligations towards the European Union flowing from the Growth and Stability Pact,” the Finance Ministry said in a statement released on August 15.

The deficit should continue shrinking thereafter, to 2.4 percent in 2014 and 1.9 percent in 2015, according to the ministry. In order to achieve these numbers, the state needs to keep the deficit at 4.6 percent of GDP this year. But based on the available data on budgetary developments, without additional measures the deficit is expected to expand to 5.3 percent of the GDP in 2012, the ministry noted. Additional measures of €629.3 million in 2013, €647.2 in 2014, and €665.1 million in 2015 therefore need to be adopted, it said.

“The government built its plan for curbing the deficit on increasing revenues,” Richard Ďurana of the INESS economic think tank told The Slovak Spectator, adding that the state is raising payroll taxes, has introduced special taxes and increased specific transfers. “The state still lacks €630 million, but is not discussing savings. Securing the lacking funds through hiking direct taxes could be risky as firms and individuals might more intensively seek ways to avoid the growing tax burden.”

Of the measures adopted so far, imminent changes to the second private pension pillar, specifically the cut in the percentage of their gross income that employees can contribute to their personal accounts from 9 to 4 percent (and the diversion of the funds into the state-owned social insurance company), will help the government’s budgetary ambitions the most, by bringing an extra €700 million into state coffers, according to the Sme daily.

The draft includes some measures that have already been adopted or are in the pipeline, such as the revision to the Social Insurance Act, special levies set to be deducted from banks and regulated companies, and an increase in the excise tax on tobacco products, the ministry said.

As for the risks present in the draft budget, Ďurana said that “the budget is built on the optimistic assumption of continuing economic growth and stability in the eurozone”. He suggests that the government should have a crisis plan in the event that Europe is hit by renewed recession or by problems linked to the possible departure of Greece from the eurozone.

The Finance Ministry is set to submit another set of consolidation measures in the upcoming weeks designed to bring an extra €630 million into the state coffers, Finance Minister State Secretary Peter Pellegrini said on August 15, as quoted by the TASR newswire.

“We have exactly two months now to submit the budget approved by the cabinet to parliament by October 15, whereby the deficit [in 2013] will be 2.9 percent of GDP,” said Pellegrini, adding that the measures will not affect the most vulnerable groups in society and that its effect on economic growth should be minimal.

The measures themselves, which will soon be submitted for interdepartmental review, should include a rise in the income tax rate for individuals with monthly salaries topping €3,246 and an increase in corporate income tax from 19 to 23 percent. Changes in the tax-deductible lump-sum allowances for self-employed people are also in the works. Apart from these tax-related – or revenue-generating – initiatives, the state will also adopt measures in other areas, said Pellegrini, as quoted by TASR.

Nevertheless, Ďurana sees other areas that are ripe for consolidation.

“The government has left spending essentially untouched,” said Ďurana. “Flat savings worth €130 million represent a minimal sum. At the same time it is the easiest move, which any government could handle, and definitely this is not the best approach. Savings should be applied where there is waste and where there is excess and over-employment.”

As for Pellegrini’s claim that the budget will not affect the most vulnerable groups, Ďurana responded that if the government refuses to valorise – i.e. increase to compensate for inflation – the subsidy paid to people in material need, increases the payroll tax for hundreds of thousands of employees, and indirectly increases the costs of services consumed by the general public, “then it is very hard to say that the middle class and the at-risk layers of society will not be affected”.

The budget planners have been relatively generous to the department of education, which should get one of the largest budgets of all the ministries: €2.45 billion in 2013; €2.32 billion in 2014 and €2.16 billion the year after.

By contrast, spending on defence may sink below 1 percent of GDP for the first time ever. The Defence Ministry should get €746.3 million in 2013, which is only 0.99 percent of GDP, well down on the €816.5 million, or 1.14 percent, it has been allocated for this year, the SITA newswire reported.

The Defence Ministry has already said that its forecast budget will not be enough to pay for the priorities of the department and that it will therefore pursue further talks with the Ministry of Finance.

The ailing health-care sector should in 2013 absorb €4.09 billion of public funds, €153 million more than the planned budget for this year. Economically active citizens will make a substantial further contribution of approximately €120 million to the health sector’s piggy bank in the form of higher health insurance fees. On the contrary, the state would pay slightly less, €31.44 instead of €31.54 per month, on behalf of those policyholders, such as children, pensioners and the unemployed, whose insurance contributions it covers, SITA reported.

The Ministry of Transport, Construction and Regional Development, which has highway construction as one of its priorities, will be allowed to spend €131.93 million more in 2013, with its budget rising to €2.25 billion. Nevertheless, the ministry had asked for €2.46 billion, including €883.9 million in EU funding and €166 million in co-financing from the state, according to SITA.

The Interior Ministry will have to tighten its belt since it will get €28.5 million less in 2013 compared to this year, with the Finance Ministry offering the department €873.7 million. The Foreign Affairs Ministry will also have less money to spend in 2013. Its proposed budget of €112.77 million is €10.2 million, or 8.3 percent, less than in 2012. However, the Finance Ministry’s budget will meanwhile grow by 26 percent to €654 million. The increase is largely down to more money coming from EU funds to pay for ongoing informatisation, or IT, projects, according to SITA.

The departments of culture, environment and justice will get more money than they have had available this year, with the Ministry of Culture seeing its allowed spending grow to €242 million, including transfers for the public broadcaster Slovak Television and Radio (RTVS) to compensate for the cancellation of viewers’ and listeners’ fees. The Justice Ministry will have a budget of €311 million in 2013. The department of environment should get €584 million in 2013, which is the highest that has been proposed for it in three years.