ARCHAEOLOGICAL research on Kapitulská Street in Trnava has recently unearthed stairs leading to the underground cellar of a medieval house. Some speculate that the stairs could possibly lead to a complex of nearby underground tunnels. 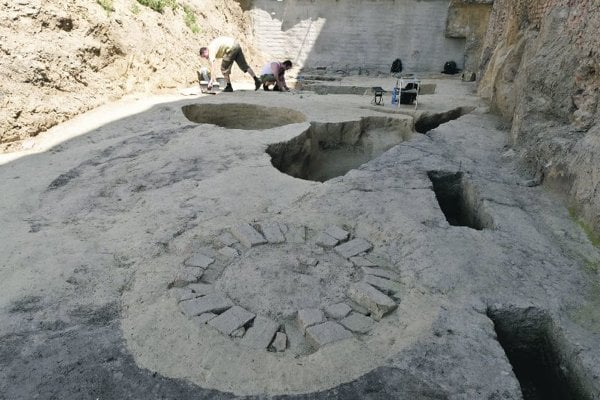 ARCHAEOLOGICAL research on Kapitulská Street in Trnava has recently unearthed stairs leading to the underground cellar of a medieval house. Some speculate that the stairs could possibly lead to a complex of nearby underground tunnels.

Archaeologists discovered them in the final phase of research of a plot on which a new multiuse building should soon stand. The plot lies in the oldest settled locality of this western-Slovak town, and the numerous findings – made by a team led by Július Vavák from the Small-Carpathian Museum in Pezinok - reflect this fact. They date from the Great Moravian period up to the 19th century and among the most significant findings is the foundation of a 14th century house made of adobe mud bricks and wood, Vavák told the TASR newswire. Although houses made from mud bricks (using a mixture of sun-dried earth and twigs) are said to have been typical for Trnava, only a handful of them have been found so far.

“Most recently, we found two stairways [leading] to underground spaces, one older and one younger than the [mud brick] medieval house,” Vavák said. “The stairs … lead under the current road. One possibility is that they lead to the houses across the street. We do not have enough information.” Yet he added that it is not likely that the stairs lead to secret tunnels, which are the legend of several generations of Trnavans, said to have been dug to lead locals out of the town walls in the event of danger.

“We rather think the stairs end in a tunnel-like cellar where food was stored,” he concluded.

During the excavations, other items found include medieval coins, pottery, tips of arrows, parts of unique bronze armour made of rings, shards of glass dinner-ware, and zoomorphic ceramic vessels. Among the oldest findings is a fragment of a bottle-like vessel for storing water or wine, probably dating back to the Great Moravian period (around 9th century AD), as is proven by a similarly decorated pot from the 8th century. This discovery is also important in that it represents the oldest evidence of medieval settlement in Trnava so far.

This section of the excavation plot – unlike the others – will not be covered by the new construction, but will be backfilled and the plot’s owner will build an access ramp over it.
“This will remain as a testimony and a task for our colleagues in the coming decades – or rather centuries – to study the findings more minutely,” Vavák said.