STUDENTS may no longer have the option in Slovakia to enrol in so-called external study programmes, a popular part-time form of college enrolment. Education Minister Dušan Čaplovič is toying with the idea of abolishing what he called an inheritance of the previous regime, and replacing it with distance learning, a form of enrolment widely used in developed countries. Although universities suggest that the financial impact of distance learning might be one of the biggest issues to sort out, they are open to the idea. 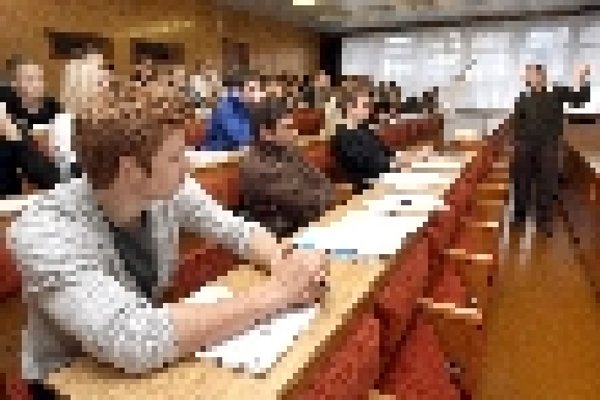 STUDENTS may no longer have the option in Slovakia to enrol in so-called external study programmes, a popular part-time form of college enrolment. Education Minister Dušan Čaplovič is toying with the idea of abolishing what he called an inheritance of the previous regime, and replacing it with distance learning, a form of enrolment widely used in developed countries. Although universities suggest that the financial impact of distance learning might be one of the biggest issues to sort out, they are open to the idea.

Čaplovič has the ambition of including the provision on distance learning in the draft revision to the University Act, which is due to be prepared next year. The change would involve extending the number of the years of study by one year.

“I certainly am interested in that as early as next year, together with the academic community, we will work on the new university act, where I see the possibility of launching the model of distance learning, utilising modern information and communication technologies,” Čaplovič told The Slovak Spectator, adding that at the moment everything is subject to discussion with the academic community.

The current legislation defines regular or daily study as fulltime enrolment. External study is based on individual study but completed through additional consultations. Both forms of study could, in theory, involve distance learning, especially with the current possibilities of e-learning, where the interaction between the student and the professor is made possible without the student having to be physically present at the school, spokesperson of the Ministry of Education Michal Kaliňák explained for The Slovak Spectator.

Now, the ministry envisions a change whereby external study will no longer be defined as individual study, but it will also specify the time it takes to complete the given programme, according to the ministry.

The new distance method will focus on teaching methods and technology with the aim of delivering classes to students who are not physically present in traditional classroom settings, according to Pravda daily.

However around 70,000 current external study students, which represent approximately one third of all Slovak students, need not be concerned as they will complete their programs according to the old rules, Čaplovič said as reported by TASR newswire.

External study was originally intended to enable students to work while pursuing academic studies, and according to the ministry, it was implemented after the Velvet Revolution, when many people who had been deprived of the possibility of studying due to political reasons, wanted access to higher education, according to Čaplovič.

Some, however, have their doubts about the changes. Member of Parliamentary Committee for Education, Youth, Science and Sport Miroslav Beblavý, from the Slovak Democratic and Christian Union (SDKÚ), said he does not think that “repainting the name of external study to distance learning will change anything”, according to Sme daily. Beblavý said the key will be
the qualitative demands placed not only on the students but also the educators. It is important that distance learning graduates not only earn the same title as regular students but also the knowledge, Beblavý added, Sme reported.

Čaplovič said he is encouraged by the supportive attitude of the Council of Universities as well as the Student Council of Colleges.

The council supports changes to the organisation of education intended for students enrolled in part-time forms of study, which includes external study, Chairman of Council of Universities, the government based advisory body Viktor Smieško told The Slovak Spectator, adding that developed countries do not use the Slovak model of external study.

For Smieško the application of the credit system, which makes it possible to stretch the study programme over a longer period of time based on the capacities of the student, would be an option, however he adds that the legislation would have to be changed in order to apply it.

“The external form of study, in the way that we are doing it, is unknown in developed countries,” Smieško told the Spectator, adding that the quality of this form of study is lower than that of the daily study model.

The adoption of successful forms of education abroad has had a positive impact on the Slovak education system, according to chairwoman of the Student Council of Slovak Universities independent student body, Katarína Stoláriková.

“I believe that strict control of quality, even the reform of criteria for the measurement of quality, will go along with this process,” said Stoláriková as quoted by TASR, adding that it could reduce the number of study programmes and enhance their quality.

Transformation from external study to distance learning does not necessarily have to bring dramatic changes to the Slovak educational system since there are already possibilities for students to study without being present at lectures, stated Renáta Králiková of the Slovak Governance Institute, an NGO focused on governance and public policy, as quoted by TASR. Yet she added that school fees are an important question with this issue since nowadays they [external study fees] represent a significant part of college revenue.

Distance learning is also very demanding as far as technical realisation, and tutors will have a difficult task preparing study materials, which they are not paid to do, so therefore “someone has to pay them as well as pay for the required technical equipment”, Smieško pointed out.