THE JAPANESE Week 2012 marked the second condensed period of events presenting the culture of this distant country to Slovak audiences, the first one having taken place last year in July. This year’s event, which occurred between August 20 and 24, shifted from last year’s focus on traditional taiko drums and attractive ice-sculpture to the equally attractive art and traditions of the ancient Noh theatre and kimono. Unlike last year, the 2012 Japanese Week also extended beyond the Slovak capital to the city of Nitra. 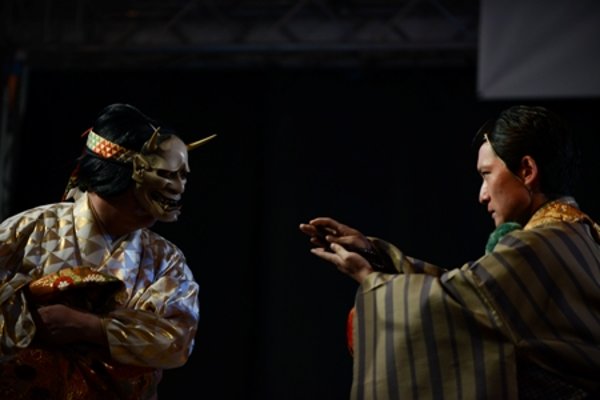 THE JAPANESE Week 2012 marked the second condensed period of events presenting the culture of this distant country to Slovak audiences, the first one having taken place last year in July. This year’s event, which occurred between August 20 and 24, shifted from last year’s focus on traditional taiko drums and attractive ice-sculpture to the equally attractive art and traditions of the ancient Noh theatre and kimono. Unlike last year, the 2012 Japanese Week also extended beyond the Slovak capital to the city of Nitra.

Noh is a traditional form of Japanese theatre dating back 650 years, and in 2001 it was proclaimed by UNESCO to be a Masterpiece of the Oral and Intangible Heritage of Humanity. “Its establishment coincides with the appearance of samurais in [Japanese] history, and is therefore connected to them,” Akihiro Yamamoto, president of the Yamamoto Noh-gakudo (Yamamoto Noh-theatre) company from Osaka explained at a July workshop which preceded the August performances. Slovak audiences – and also some foreign tourists – were able to experience this unique form of drama on August 21 in the City park in Nitra, and on August 22 in Bratislava’s Main Square. In Nitra, Hagoromo / Cloak from Feathers was performed (which was the subject of the July workshop), while an audience in Bratislava got to see Aoi-No-Ue / Mistress Aoi.

Despite an introduction to help Slovak audiences understand the plot and the significant role of music and masks in Noh theatre, some viewers left during the hour and a half long performance, but enough of them stayed until the end, including some children. For the purposes of the Slovak tour, the complex theatrical form was abbreviated and adapted (in Japan, the most traditional productions may last up to four hours), including subtitles to explain the events unfolding on stage. As the main characters in Noh wear masks, they must express their emotions through subtle gestures and movements.

As for the plot, Noh productions typically draw on old Japanese and Buddhist mythology, legends and literature. Symbolic battles with demons and evil spirits, and dialogs with gods, spirits and other supernatural beings are the most common motifs. For example, in Aoi-No-Ue / Mistress Aoi, Mrs. Aoi appears only in the form of the “kosode”, a kimono that represents the poor lady as possessed by an evil spirit. Music is played on ancient traditional instruments and largely deviates from western musical scales.

Many passers-by on the Main Square stopped to have a look, but without the cultural background, it was not easy to follow the production’s rich symbolism and meaning. However, given the Noh theatre’s use of archaic language, it is not always easily understood by today’s Japanese audiences, either.

For an encore, the Yamamoto company offered an extract from the Fujigumo drama which depicts a battle between a brave warrior and an unknown illness in the form of a monk-spider who tries to wrap him in a web, but the hero fends it off with his sword (fortunately, he never sleeps without his sword). This visually impressive piece garnered ecstatic applause from the audience.

Events organised by the Japanese Embassy included a kimono workshop. “The really luxurious kimonos [interwoven] with 14-carat gold can cost as much as an expensive sports car,” Akiko Fuehrmann, who led the workshop, told the audience. Other workshops and events focused on origami (the traditional art of paper-folding), ikebana (traditional flower arranging) and an exhibition of photographs by Kazuyoshi Miyoshi from the Japan Foundation collections, all of which took place at the Japanese Embassy.

Japanese Week 2012 – as well as this year’s Bratislava Cultural Summer – culminated in a Concert of Japanese-Slovak Friendship on August 24 at the Clarissen Church. With an introduction by Japanese Ambassador to Slovakia Akira Takamatsu, the evening featured a range of performances by both Japanese and Slovak musicians, playing more traditional compositions (containing both classical and with folklore influences) as well as popular tunes. The composers and performers were a mix of Japanese and Slovak: the first part of the concert was played by a mixed couple, Oto Šereš on bass and Takako Šereš on piano. The second part consisted of music performed by Takako Šereš and Štefan Sojka Jr. on violin, the latter of whom was also joined by a string quartet, while the last part was played by Mayuko Takine (piano) and sung by Nao Higano (soprano), who in addition to interpreting popular Japanese songs, also performed “Ružičky” by Slovak composer Mikuláš Schneider-Trnavský.

Unlike the other events offered at Japanese Week, this final concert seemed to focus not merely on traditional Japanese culture and art, but rather on areas where Japanese and Slovak tastes and artistic expression converge to create a unique and enticing cultural fusion.