A MOTHER given just an hour per week to see her child, families separated without any legal reason, and little chance of parents winning back custody of their children: this is the picture that the Slovak media has recently painted of British social services, one which has provoked strong reactions in both countries. 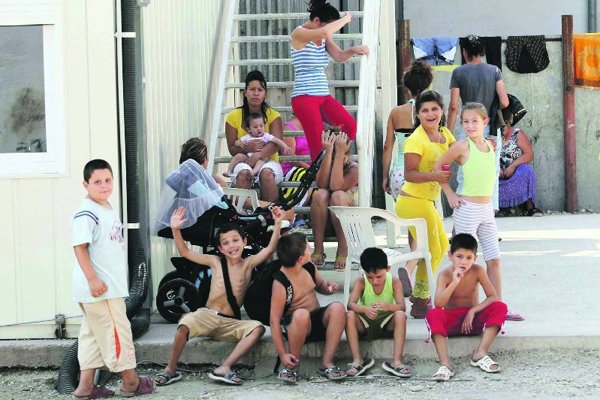 A MOTHER given just an hour per week to see her child, families separated without any legal reason, and little chance of parents winning back custody of their children: this is the picture that the Slovak media has recently painted of British social services, one which has provoked strong reactions in both countries.

Forced adoptions of Slovak children in the UK became a controversial news item in the Slovak media last month after Slovak channel TV JOJ broke the story of five children from near Humenné, in eastern Slovakia, who were placed in foster care after being taken away from their parents, Miroslav Goroľ and Veronika Čonková, Slovak citizens who left for the UK in June 2012. One of the five children was a baby born to the couple shortly after their arrival in the UK.

Temporary foster care is a step that may be followed by adoption if the parents fail to prove that they are able to provide suitable living conditions for their children, Slovak media reported on the case, provoking an uproar among Slovaks, piqued by the fact that the family is of Roma ethnicity.

British authorities have taken away about 100 Slovak children from their parents in the past three years, with some of the children having already been adopted by new parents in the UK, the Sme daily reported.

The Slovak media also voiced suspicions that British authorities were taking children away from their families with the purpose of satisfying British citizens who were interested in adopting a child as fast as possible, but failed to provide substantial grounds for such suspicions.

In the UK, a court can only issue a care or supervision order “where the child is suffering or likely to suffer significant harm and will only make an order where this is better for the child”, according to the official UK judiciary website (www.judiciary.gov.uk). Any potential adoption order is preceded by care proceedings, which start by notifying the parents that the local authorities are considering care proceedings. The local authority then tries to cooperate with the parents to ensure full assessment of the child’s situation, provision of services and a child protection plan.

In the application, the local authority may ask the court to consider making an interim care order or an interim supervision order (temporary orders) at the first hearing. The court appoints a children’s guardian from Cafcass (Children and Family Court Advisory and Support Service) to represent the child. The children’s guardian appoints a solicitor for the child. The court can decide that a child should be taken away from the parents to stay with relatives or at a foster home.

“It can do this at any time during the case if it thinks the child’s welfare demands it,” the website states.

For the 27,310 children who were placed into foster care during the year ending March 31, 2011, the main reason cited was abuse or neglect (54 percent).

But at the same time Cafcass states in the results of the 2012 Cafcass Care Study (under which they surveyed more than 200 Cafcass guardians in relation to 247 care applications involving 401 children, conducted in November 2011) that since 2007-08 Cafcass has witnessed a 62 percent increase in the numbers of local authority care applications. In 2011-12, and the number of applications topped 10,000 for the first time ever.

“[But] not all care applications result in children being taken into care,” the Cafcass spokesperson, Molly Garboden, noted in an e-mail interview with The Slovak Spectator. “They are just the applications to court and may well result in a child staying with their family.”

Peter Connelly died in August 2007 at home in Haringey, north London, after months of abuse, and his case was reported to have revealed incompetence among social workers, doctors, lawyers and police. The 17-month-old boy had suffered more than 50 injuries, and had been visited 60 times by the authorities in the eight months before his death, the BBC reported.

“Following on from the Baby Peter tragedy there was an upsurge in care applications which is still being sustained three years on,” Anthony Douglas, Cafcass Chief Executive, said when releasing the study results. “For vulnerable children today this defining study gives encouraging signs that court applications to protect them are now more timely and being made at an earlier stage of a local authority’s involvement with their family.”

Media speculation that UK authorities might not have followed correct legal procedure has provoked strong reactions among Slovaks.

Civic activist Natália Blahová from the Association of Substitute Families (who previously sat in parliament as an MP for Freedom and Solidarity in the past), wrote an open letter to Slovak and international human rights guardians, saying that in Slovakia “it is almost absurd that a child is separated from a breastfeeding mother”.

“It is also unthinkable that countries take any steps leading to the separation of children from parents without first having performed proper social investigation in the family, and without giving a say to the children and the respective bodies of the country of which the children and their parents are citizens,” Blahová wrote in the letter, which she also published on her blog.

“It’s clear that Great Britain is not [abiding by] the European Convention on Human Rights,” British Liberal Democrat MP John Hemming told the Sme daily, adding that the situation has been worsening since 2000 when then prime minister Tony Blair started pressing for an increase in the rate of adoption orders.

Hemming has criticised British social workers in the past. Now he claims that the problem concerns about 1,000 families a year and the main issue is that proceedings are not public, which he wants to change by a draft amendment he is going to propose in October, Hemming told Sme.

On the other hand, Petra Schwarczová, who works as a freelance translator in the UK and often acts as a translator for British social workers when dealing with Slovak parents, criticised the Slovak media on her blog.

The news has provoked fear among Slovak citizens living in the UK, and many families, mainly of Roma ethnicity, have been contemplating leaving the country as soon as possible in order to protect their children, Schwarczová told The Slovak Spectator.

“Some families have left their houses and they are staying several families together in one house in order to have more men to protect them from social services when it comes to ‘steal’ their children,” Schwarczová said. She has never seen any child being taken away from its parents for good and given up for adoption, she said.

Her experience shows that social workers do not aim to take children away from their families as the first solution, but there are cases when such a step is inevitable, such as when children fail to attend school for a month or more because their parents took them for holidays to Slovakia, or when a child comes to school hungry every morning. There are also cases of sexual abuse and drug addiction in the families, Schwarczová wrote on her blog.

“Social workers and various other organisations are trying to do everything in order for the children to stay with their parents,” Schwarczová wrote, explaining that in her experience social workers working with Slovak families often do things that are not included in their workload at all, such as filling out their forms for social allowances, or organising housing in a council house for the family.

The Slovak authority responsible for dealing with such cases is the Centre for International Protection of Children and Youth, working under the Labour Ministry. The Centre’s head, Andrea Císarová, did not respond to the questions of The Slovak Spectator. She was due to fly to London to get more information on the cases of children taken from Slovak parents by British authorities, the Sme daily reported. She was not familiar with the problem as she has only been in the post for a month at the time when the media reported it.

Prime Minister Robert Fico said on hearing about the case that he found the British model of family care inspiring.

“In Slovakia we have often discussed taking a child away from the family in case the family doesn’t provide appropriate care,” Fico said as quoted by the Sme daily, adding that it would show the children “that they can have a completely different lifestyle than the one their parents offer”.