IF THE POPULARITY of Slovakia’s Constitution Day holiday can be measured by the number of people who bothered to attend official celebrations held to mark the 20th anniversary of the country’s founding document then Prime Minister Robert Fico should face little opposition if he decides to cancel it. The government wants to cull the number of state holidays as part of a plan to boost the economy. 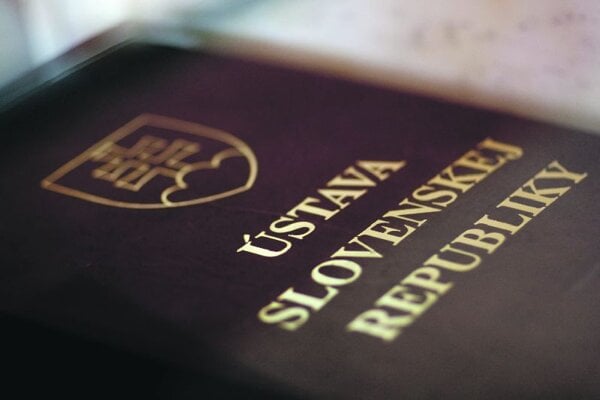 IF THE POPULARITY of Slovakia’s Constitution Day holiday can be measured by the number of people who bothered to attend official celebrations held to mark the 20th anniversary of the country’s founding document then Prime Minister Robert Fico should face little opposition if he decides to cancel it. The government wants to cull the number of state holidays as part of a plan to boost the economy.

The live broadcast from this year’s September 1 celebrations, provided by public broadcaster Slovak Television (STV), could not conceal the fact that speeches by Slovakia’s top officials to mark the birth of the constitution were made to an almost empty auditorium at Bratislava Castle. According to the Sme daily, only around 128,000 people watched it on TV.

“Thanks to it [the constitution] we can look into the rear-view mirror and project our future,” said Slovak President Ivan Gašparovič at a formal session of parliament on August 31 marking its 20th anniversary. He added that the constitution does not have to be justified, since “it has justified itself”.

The adoption of the constitution by the Slovak Parliament on September 1, 1992, was a key moment in the process of splitting the former Czechoslovakia, a move negotiated by then Slovak prime minister Vladimír Mečiar and his Czech counterpart Václav Klaus. Mečiar, whose Movement for a Democratic Slovakia (HZDS) has not been represented in parliament since 2010, did not make it to parliament and did not attend the Constitution Day celebrations.

Political scientist Miroslav Kusý, who found the official event a disappointment, described the celebration of Constitution Day as an attempt to have a “grandiloquent spectacle at the castle” which in fact turned out to be an event featuring “speeches that were shallow and meaningless”.

According to Kusý, in comments to The Slovak Spectator, the text of the constitution, except perhaps the preamble, is a legal text, which is rather demanding to read and thus might not say much to the public. Yet what the public wants is “a well-functioning state, which is founded on a firm democratic basis” and that they expect their representatives to observe the constitution.

President of the Institute for Public Affairs (IVO) think tank Grigorij Mesežnikov cast doubt on whether the original date of the constitution’s adoption should really be marked by a state holiday at all, suggesting that it would be enough to regard it as a significant historical event. He also noted that the quality of the text adopted in 1992 was lower than it should have been.

“Let’s not forget that half of it [the constitution] was revised in 2000,” Mesežnikov told The Slovak Spectator, adding that that this massive revision was in fact a reform of the constitution, and was in essence even more significant in terms of the text than its original adoption.

The political analyst also noted that the current prime minister did not vote for the 2000 revision of constitution, thanks to which Slovakia was able to enter the European Union.

“Thus the idea of a state holiday on the day when the constitution was passed is outdated and it should be cancelled,” Mesežnikov said, adding that the celebrations were overdone and represented an archaic approach to the constitution. He said that professional debates on the quality of the constitution would have been more appropriate.

The Slovak Constitution has 13,896 words and almost 84,000 characters with 427 paragraphs, according to an analysis by the Office of the Slovak Parliament carried out on the occasion of the 20th anniversary. The word “Slovak” appears in the constitution 393 times.

Of the 134 deputies present at the session on September 1, 1992, 114 voted for the constitution, 16 voted against and four abstained from the vote. The constitution was formally signed on September 3 at Bratislava Castle by Gašparovič, who at that time served as speaker of parliament and Mečiar, then prime minister. The constitution became valid on January 1, 1993, when the Slovak Republic became independent, SITA newswire reported.

“No matter how well those in power try, for the sake of formality, to iron and decorate it, they will not restore respect to it,” said Procházka, as quoted by the SITA newswire. “It lacks majesty and it will not have it until a general feeling that it is really the basic document of the state and there is no higher rule here.”

Whatever is added to the constitution would be only an attempt to mend its ruined tissue, he added.
Deputy Speaker of Parliament Renáta Zmajkovičová, a Smer MP, said that changes to the constitution should not create an atmosphere of political tension and social division, SITA reported.

Kusý tended to agree with Procházka’s comments, adding that the text of the constitution has been through revisions which did not benefit the document; rather the opposite.

“He is right that many things should be fixed,” Kusý told The Slovak Spectator. “We can see it in specific examples: when the president is unable for more than a year to appoint the general prosecutor but in fact acts in line with the constitution, then it is a warning sign that there is something wrong with such a constitution.”

Unfortunately, politicians have a selective approach to the constitution, said Mesežnikov, adding that not even the highest state representatives set positive examples. He also referred to the case of Jozef Čentéš, who has been awaiting formal appointment to the post of general prosecutor despite having been elected to the post in a vote by MPs more than year ago.

“For example, what the president has been demonstrating in association with the appointment of elected general prosecutor Jozef Čentéš in my opinion denies the spirit of the constitution,” said Mesežnikov.

Kusý and Mesežnikov were referring to the president’s refusal to formally install Čentéš until the Constitutional Court has ruled on all cases associated with the selection of the top prosecutor.

According to Mesežnikov, the adoption of unconstitutional laws in parliament is the worst possible grade for the political class as far as their relationship with the constitution is concerned.

“We know there have been a couple of laws adopted which were at odds with the constitution,” said Mesežnikov, adding that this has happened despite the fact that all politicians enthusiastically declare that they identify with it.

Mesežnikov cited the law on citizenship as being on the verge of constitutionality. Constitution Day saw about 300 ethnic Hungarian Slovak citizens protesting in Košice against the 2010 revision to the Citizenship Act according to which people who acquire the citizenship of another state can be stripped of their Slovak passport. A group of deputies have already challenged the legislation at the Constitutional Court.

The idea of revamping the constitution has been floated for some time but the political will to accomplish the task has always been lacking. The most urgent issues were addressed in 2000, which was a crucial move because without that amendment the constitution would not have been usable, said Mesežnikov.

“The adoption of a new, more conceptual text would be desirable,” said Mesežnikov, adding that he was not talking about changes but rather a re-codification of the text, which would effectively mean the adoption of a new constitution.

In order to launch such a process, a long public and political debate would be necessary, he concluded.

“We are not completely for a new constitution, though who knows what will happen in the European Union,” Speaker of Parliament Pavol Paška said during a televised political debate on STV, suggesting that developments within the EU might require constitutional changes on the part of Slovakia.