THIS HUMOROUS postcard from 1924 reveals a lot about the time in which it appeared. There are other similar postcards containing the text, “I just arrived with luck in Košice!”, depicting various Slovak towns. 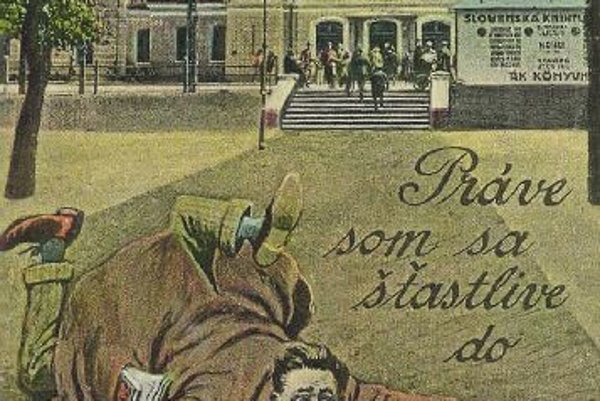 THIS HUMOROUS postcard from 1924 reveals a lot about the time in which it appeared. There are other similar postcards containing the text, “I just arrived with luck in Košice!”, depicting various Slovak towns.

A lot of Czechs travelled through Slovak territory in the early 20th century. People travelled mainly by train, but transport via horse-drawn carriages was common in Slovakia’s more remote regions.

Slovakia was an attractive and slightly exotic country for Czechs. Compared to their own relatively densely populated and developed territory, Czech tourists could find in Slovakia vast expanses of practically untouched nature. Tourists from beyond the Morava River were also fascinated by the locals’ way of life, especially in the mountainous areas of the country.

Many people came here from Bohemia to work. When the Czechoslovak state came into existence in 1918, a lack of qualified and educated people in Slovakia meant that many Czechs arrived to take up posts in public administration and the education sector. Trains full of soldiers were another common sight, especially in the unstable years immediately following the First World War. Many travelling salespeople ventured into the new territory as well.

Thanks to this influx of visitors to the Slovak portion of the newly-formed Czechoslovak Republic, a lot of period postcards were produced, a good number of which have been preserved. Most of the postcards published in this column were written by Czechs to their families and friends at home.