Slovakia’s voice in the Olympic world

FAILING to bring home a single gold medal, the Slovak Olympic team was not as successful as athletes, sport officials and fans of Olympic sports were hoping for. For shooter Danka Barteková, however, the opposite is true. She not only won the bronze medal in her discipline, skeet shooting, her first ever Olympic medal and Slovakia’s first trophy from London 2012, but at the end of the Olympic Games she also found success in the diplomatic realm when she was elected to be a member of the Athletes’ Commission of the International Olympic Committee (IOC) – an achievement that the Slovak Olympic Committee President František Chmelár said was equal to winning “four or five gold medals”.The Slovak Spectator spoke to Barteková about her newly-acquired IOC membership and what it means to her and to her country. 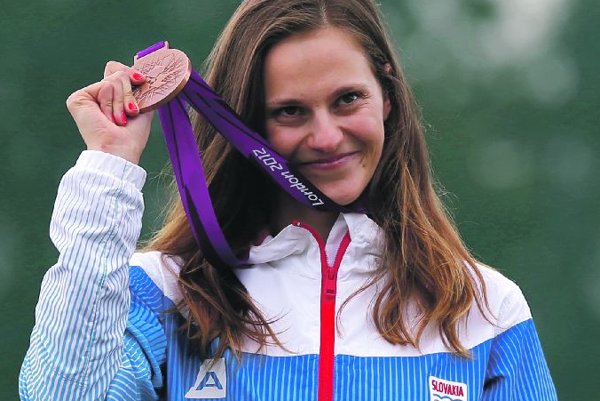 FAILING to bring home a single gold medal, the Slovak Olympic team was not as successful as athletes, sport officials and fans of Olympic sports were hoping for. For shooter Danka Barteková, however, the opposite is true. She not only won the bronze medal in her discipline, skeet shooting, her first ever Olympic medal and Slovakia’s first trophy from London 2012, but at the end of the Olympic Games she also found success in the diplomatic realm when she was elected to be a member of the Athletes’ Commission of the International Olympic Committee (IOC) – an achievement that the Slovak Olympic Committee President František Chmelár said was equal to winning “four or five gold medals”.
The Slovak Spectator spoke to Barteková about her newly-acquired IOC membership and what it means to her and to her country.

The Slovak Spectator (TSS): What did the election campaign look like?
Danka Barteková (DB): Each athlete received an election manual directly in their rooms in the Olympic village, there were posters with our [the candidates’] pictures everywhere in the village, and the election room was in the canteen. The IOC was trying to encourage the athletes to vote by giving umbrellas to those who voted. They joked that most votes were cast when it was raining.

TSS: Your parents flew to London to see the closing ceremony, since you were supposed to be officially presented there as the new member of the commission along with three other winners of the election. But the official presentation was postponed due to some problems with the election results. What happened?
DB: Two athletes, candidates from Chinese Taipei and Japan, were disqualified because they were campaigning outside [what was permissible in] the campaign framework. Before the start of the election we had to sign the rules of conduct and we knew what we were allowed to do and what we weren’t. They probably did not respect that. The two disqualified athletes have appealed against the results of the vote and the Court of Sports Arbitration should decide within a period of four months.

TSS: But your place on the commission is certain, since you won the election with the highest number of votes, which came as a big surprise to many. How did you achieve that?
DB: I think that the people who knew me, mainly shooters, did some lobbying for me. They know me as a person who always wanted to work for the IOC and represent them and I think they just put their faith in me. Many people told me that they encouraged their mates from their countries to vote for me. And it worked. Because, in fact, many people don’t know who to vote for. Swimmers recognise the names of other swimmers, but have no idea about, for instance, archers. I also had a nice promotional leaflet to introduce myself as a person willing to do this job and showed the athletes that I am taking this seriously.

TSS: Now you are a member of the commission after more than a decade of Slovakia being without representation in the international Olympic bodies. What does it mean for the country?
DB: As a member of the Athletes’ Commission I automatically became a member of the International Olympic Committee itself for the term of eight years. It is very prestigious for Slovakia to have a member in the International Olympic Committee (IOC), because there are only 115 people. So, 115 votes, and I’m one of them, and as such I have a chance to influence big decisions. For instance, next year there will be the election of the new IOC president, since Jaques Rogge’s term in office will expire, and then we will also vote on the venue of the 2020 Olympic Games.

TSS: And, just to get a bit more personal, what does it mean to you?
DB: I have studied diplomacy, so it is somewhere in the middle between my sports career and my academic career. And I really wanted to do this. But I thought the chance was really small – [shooting] is a small sport, and Slovakia is a small country, after all. I simply did not count on [being elected].

I thought nothing would happen, that I would just make my name a bit more familiar among the Olympians and that maybe in four years’ time or later I could stand a better chance. You know, I was planning to finish school, keep on shooting, perhaps win one or two more Olympic medals, and once I am 40 perhaps enter the world of sports officials. And now it happened, I’m 27 and I’m right there. You know, you start dreaming about something that you hope might come true at some point in the future, and all of a sudden it’s here. But I’m not afraid; I believe I can make it work together with shooting. It mainly means I will have to travel a bit more than I do now. Instead of 10 trips a year I will make 14 or 15. Twice a year the commission meets in Lausanne, where the office is located, for working sessions. Plus things like the sessions of the IOC, which will take place in Buenos Aires next year. I’m looking forward [to that].

TSS: Are you going to focus on any particular agenda within the commission? What will your work look like?
DB: I am a member of the commission which represents the voice of the athletes and that’s my first priority. But in terms of the decision taken within the IOC Sessions, the Slovak Olympic Committee will be my helping hand. Apart from that, I’m also working in cooperation with the Foreign Ministry. Minister [Miroslav] Lajčák immediately took it as a great opportunity for Slovak diplomacy, one that we haven’t had in a long while. So he offered me the support and help of the ministry. But it’s perhaps important to say that I’m not turning into a sports official now. I’m not going to devote myself to solving the issues of sports in Slovakia now, even though as an IOC member by the Olympic Charter I have also become an ex officio member of the Slovak Olympic Committee executive board. I remain an athlete first.

TSS: Speaking about the state of Slovak sports, the Slovak Olympic team was viewed as rather unsuccessful, with four medals, none of which were gold. But is that really so? Austria, for example, brought home nothing.
DB: But Hungary has 18 medals. And that’s because they invest a lot of money into sports, and they have a different system, one that works well. Our system needs a change. I’d be very happy to talk about what the athletes need and how it should look. However, I’m very inexperienced in terms of sports governance.

TSS: So how could it start working?
DB: Look at our physical education lessons at schools. And then look at the US, where it is all up to the schools. Not like here, where some local aikido club is recruiting and they put up some posters, but the public couldn’t care less because they know nothing about that sport. Of course, if someone wants their child to do gymnastics, they will bring their child to the gymnastics club. But if the parents have no idea about sports, how should they know? There is no information in schools. So it’s not about pumping five times more money into sports. There are so many things missing. There should be paid coaches at schools. School leagues are missing, something that in the US is a total must. The quality of school and university leagues in the US and in Slovakia is incomparable. Doing sports at a university there is quite prestigious, and that is how it should be here as well. Most schools here don’t have stadiums. But also, schools should offer a variety of sports. Why not take pupils to swim as an afternoon activity instead of your usual Slovak PE class? The problem is also in the way we treat sports here. Often we treat it as a luxury only available to the rich, and a normal person has no chance. But what chance do you need to take your child out to the park or a forest for a run, or for a bike ride?