EFFECTIVE and transparent procurement processes in which all bidders get equal treatment and the state gets the best deal for the best price: this is the world that Slovakia’s Interior Ministry envisions in its draft revision to the law on public procurement. 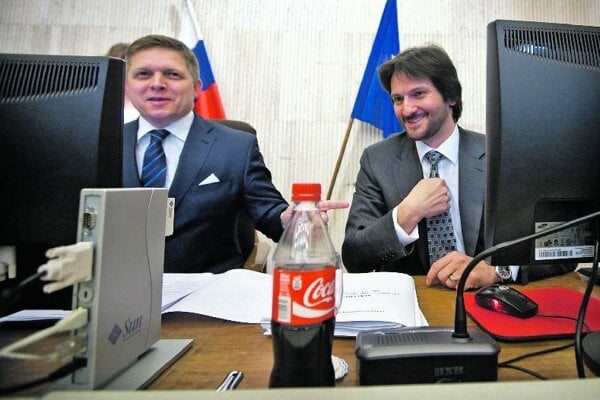 EFFECTIVE and transparent procurement processes in which all bidders get equal treatment and the state gets the best deal for the best price: this is the world that Slovakia’s Interior Ministry envisions in its draft revision to the law on public procurement.

While political ethics watchdogs agree that more transparency in public tenders would benefit Slovakia, where favouritism in decisions by government officials has been a persistent problem and has prevented Slovakia from improving its performance in international competitiveness rankings, they also warn that some of the proposals tabled by Interior Minister Robert Kaliňák might have the opposite effect.

The draft revision, which was submitted for accelerated interdepartmental review on September 4, would substantially extend the duty to publish procurement-related data and remove the option to carry out procurement through closed negotiation.

Procurement of goods up to €100,000 should be carried out through electronic auctions, with the state envisioning an electronic market place.

Contract amendments that can change a deal’s price would also be phased out, while in the case of repeated assignment of state deals the principle of the lower price would be applied, according to an official statement from the ministry.

But it is a proposed special regime for large procurement deals – so-called strategic orders – that has attracted the most attention, and hit a raw nerve with political ethics watchdogs, specifically Fair-Play Alliance and Transparency International Slovensko.

The authority to make decisions on deals that have societal significance and exceed €10 million would belong to the government and a subordinate selection committee, which could also involve representatives of businesses, according to the proposal.

Kaliňák has said that he expects three or four procurements per year to fall under the regime, in which either the state would address businesses with specific deals or businesses would address the state with offers, which would subsequently be published with the possibility of other businesses submitting better bids, according to the Sme daily.

“In the case of strategic orders complicated competitions are in question,” Kaliňák said in an interview with Sme on September 10. “We want someone to take over responsibility for them.”

The head of Transparency International Slovensko, Gabriel Šípoš, called on Kaliňák to remove this proposal from the draft, telling Sme that ministries could easily use it to exclude firms which are not politically friendly.

Peter Kunder of Fair-Play Alliance told The Slovak Spectator that Kaliňák, speaking at a workshop on public procurement, commented that with respect to strategic orders it was necessary to bring “more subjectivity, which will be balanced by transparency” to public purchasing decisions. Kaliňák called the current provision, which uses European rules to govern very large orders, “paranoid” since it assumes that everyone wants to steal, Kunder noted.

“We consider it correct that in decision-making about [the spending of] huge sums from public funds the degree of subjectivity is as low as possible,” Kunder told The Slovak Spectator. “Primarily, in Slovakia it is necessary to create such rules that those who want to steal have the lowest possible chance. Thus we differ from Kaliňák even in the basic perception of the goal of the law and strategic tenders are unacceptable for us.”

The opposition Slovak Democratic and Christian Union (SDKÚ) claims that the revision to the law on public procurement will make it possible for Smer to use its dominant position in power to its financial advantage, while turning Kaliňák into the strongest minister of the government.

Miroslav Beblavý and former justice minister Lucia Žitňanská said that in practice the revision will mean that “politicians and bureaucrats will be able to pick in public procurement those whom they want to pick and not those who give the best offer”.

“The proposal is tuned in a way that makes problem-free manipulation of public procurement possible,” said Žitňanská, as quoted by the SITA newswire.

Kaliňák denied that the revision is motivated by efforts to achieve a high concentration of power in the hands of the Interior Ministry, suggesting that Žitňanská had perhaps not read the law. He said that his ministry is not interested in any concentration, rather the opposite: “in cooperation with the Ministry of Finance, to which the central public procurement is attached, a room or platform will be created which will centrally handle public procurement only in the area of goods and services”. This means no highways, hospitals, simply nothing which falls under the remit of particular ministries, said Kaliňák.

Much of the information about public procurers, firms and processes should, according to the revision to the law, be kept in digital form in one place using information systems which would be administered by the Public Procurement Office (ÚVO) and the Interior Ministry, Kunder explained.

Kaliňák has publicly declared that a large part of these data will be publicly accessible, but the wording of the revision does not make it clear exactly which data will really be published, Kunder noted.

According to Kunder, in the case of some data, it [the draft] stipulates that these will be stored only for five years. He said that this limit is quite difficult to understand, but he added that the amendment is still being prepared and that he believes it will be improved.

“The important issue for public control is whether anyone will be able to download these data in a well-structured form so that they will be usable in other applications which can process them en masse,” Kunder told The Slovak Spectator, adding that the option of selecting those sensitive data which can point to corruption will be very important.

Among the provisions that Fair-Play Alliance had hoped to see in the draft but which have not appeared are tools to help to eliminate unjustified state spending, which happens when the state procures, for example, a good service in a fair manner and for the best price – but does not actually need it.

“We had hoped that the revision would introduce tools to eliminate such situations, for example by making it obligatory to publish an analysis or impact study along with the call for procurement, to explain why someone had decided to spend huge amounts of money for a certain purpose, to make clear why it is advantageous to buy the given goods and not to rent them, for example, and why the given amount [is being purchased] …,” Kunder explained.

The state has also turned a deaf ear to calls to define a stronger role for professionals who might be able to reveal illegal conduct, Kunder added.

The Interior Ministry is also proposing that profiles of firms which apply for state orders be published on the internet, along with evaluations by state officials.

“This should help push out firms which damage the credibility of businesses [in general] from public procurement,” Kunder said, adding that a true system of checks is still missing, or at least one which would be able to prevent abuse of the reference system to exclude good businesses from competition, as is a system which would effectively prevent subjective evaluation by bureaucrats leading to ill-willed damage being done to the name of a firm which, for example, refuses to pay bribes.