IN KEEPING with the Slovak tradition of celebrating landmark anniversaries, the alternative theatre and dance school elledanse is celebrating its 5th anniversary this month. 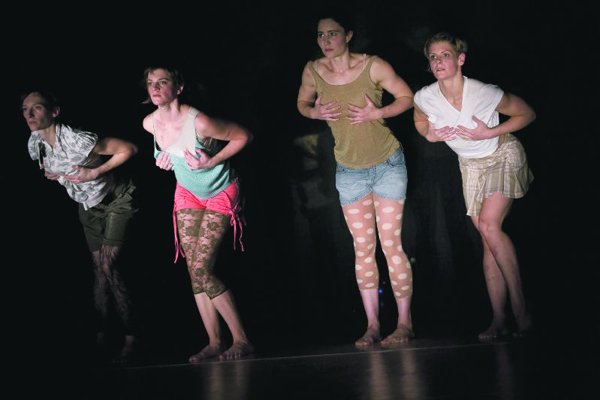 IN KEEPING with the Slovak tradition of celebrating landmark anniversaries, the alternative theatre and dance school elledanse is celebrating its 5th anniversary this month.

The opening of the season was relatively modest, featuring an exhibition of photography by Noro Knap which illustrated the history of the ensemble and its activities. In addition, an outstanding piece, Kolik váží vaše touha? / How Much Does Your Desire Weigh?, which was selected as the best Dance Staging of the Year 2012 in the Czech Republic, was performed by Czech ensemble VerTeDance.

This fresh, provocative and humorous piece took place on September 7, with Slovak Lucia Kašiarová greeting and forcing unwitting and puzzled visitors to weigh themselves. Soon, Kašiarová joined three other performers as the piece unfolded into a thrilling game confronting interpersonal relationships and self-exploration, marked by lasciviousness and childish playfulness while sometimes bordering on cruelty, all set to the disquieting live music of Czech band Zrní.

The following day, elledanse hosted an Open Day for anyone interested in dance courses, including free lessons in 10 dance styles, workshops for the public and enrolment in the dance school. On the evening of September 8, a party with live music from the La3no Cubano band rounded out the launch of the 2012/2013 theatre and school season.

After five years in existence, elledanse refuses to rest on its laurels and has prepared five premieres for its 6th season: one with a guest ensemble, the Debris Company, and four with domestic ensembles, two of which are to be directed by a doyen of Slovak theatre, playwright, director and founder of the cult theatre GUnaGU, Viliam Klimáček.

“We feel the expressive style and poetics of GUnaGU is close to ours, because they often have music as part of their performances, and always movement,” head of elledanse Šárka Ondrišová said at a press conference. In October, elledanse and Klimáček plan to premiere Dlhá noc / Long Night, a fusion of drama and movement in a story about how the lives of five people intertwine during a single night. This piece will mostly feature domestic performers, with the exception of Judit Bárdos and Csongor Kassai.

On the other hand, the April premiere of alternative musical Bublina v betóne / Bubble in Concrete, set to the music of the band Longital, will feature GUnaGU actors. For children, there is the Prázdniny v ríši rozprávok / Holidays in the Realm of Fairy Tales, a sci-fi inspired piece directed by Veronika Pavelková that will premiere in November.

“We will dive into people’s private lives and we will see what they disclose when they feel unobserved,” director Lucia Holinová said.

More information can be found at www.elledanse.sk.