KOMÁRNO’S fortress, a national historical monument, requires extensive reconstruction. The Old and New Fortresses are both in a state of disrepair, with some sections having been condemned. The southern Slovak town of Komárno owns the monument. 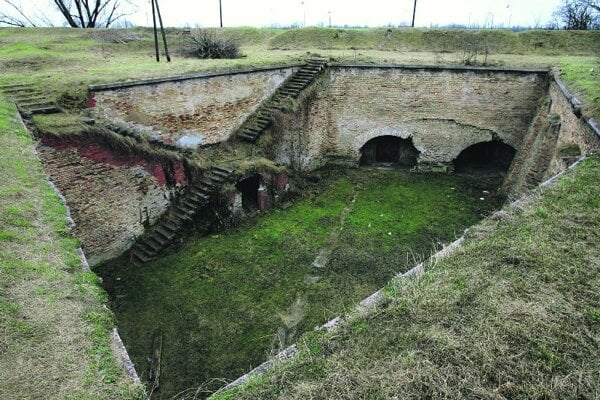 KOMÁRNO’S fortress, a national historical monument, requires extensive reconstruction. The Old and New Fortresses are both in a state of disrepair, with some sections having been condemned. The southern Slovak town of Komárno owns the monument.

Local councillors authorised the mayor to have a blueprint drafted and to schedule the most urgent repairs required to save the structure. The town must begin reconstruction at the barracks in the New Fortress, where the roof has collapsed.

The Regional Preservation Office of Nitra in a ruling, after having inspected the buildings, declared the fortress structurally unsound and ordered the town to temporarily cover the collapsed roof to prevent further damage to the structure. Another priority will be to complete the energy and sewage systems, without which any activity in the complex of the fortress will not be possible. The blueprints and designs have already been prepared.

Construction of the Old Fortress began on the orders of Emperor Ferdinand I in 1546 to defend the territory against Ottoman invasion, and it was completed in 1557. The New Fortress, ordered by Emperor Leopold I, was built between 1663 and 1673.

After a 19th-century reconstruction and expansion, the fortress became one of the biggest fortification systems of its kind, with an outer circumference of 15.5 kilometres. Its enormous buildings made it unique: in the 19th century, they could have housed an army of 200,000 soldiers. This was the biggest and strongest fortress of the Austro-Hungarian monarchy. The fortress’ defences were never overcome – either during the 16th century Ottoman sieges, or during the Hungarian Revolution in 1848-49.

The fortress straddles the border between Slovakia and Hungary, both of which collaborated in a proposal to inscribe it on UNESCO’s World Cultural Heritage List. Since 2003, when Komárno assumed ownership of the fortress, it received several grants and subsidies for repairs and also contributed from its own budget.

For 2012, the town hall received €10,000 from the Culture Ministry for the reconstruction of Ferdinand’s Gate and €21,800 for research. In the last two years, the non-profit organisation Stará pevnosť / Old Fortress has been involved in the restoration of the Madonna Bastion.