EDUCATION Minister Dušan Čaplovič has begun administering his remedy for the ills of the country’s schools system. He diagnosed these, shortly after being appointed in early April, as: a lack of qualified labour to work in some industrial sectors; an overly complicated system of school financing; and too many young people studying humanities subjects. The minister’s cure, in the form of a new law approved by MPs on September 20, includes, among other things, stricter conditions for the admission of students to secondary grammar schools – known to Slovaks as gymnasiums; these tend to be the most academic schools and are viewed as natural feeders into the university system – as well as new powers for Slovakia’s eight regional governments (VÚCs) to decide on the number of first-grade classes that can be opened at such schools. 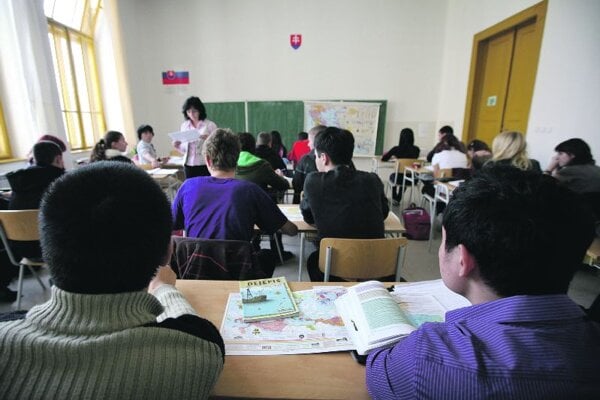 EDUCATION Minister Dušan Čaplovič has begun administering his remedy for the ills of the country’s schools system. He diagnosed these, shortly after being appointed in early April, as: a lack of qualified labour to work in some industrial sectors; an overly complicated system of school financing; and too many young people studying humanities subjects. The minister’s cure, in the form of a new law approved by MPs on September 20, includes, among other things, stricter conditions for the admission of students to secondary grammar schools – known to Slovaks as gymnasiums; these tend to be the most academic schools and are viewed as natural feeders into the university system – as well as new powers for Slovakia’s eight regional governments (VÚCs) to decide on the number of first-grade classes that can be opened at such schools.

An NGO has called the decision to introduce stricter entry criteria “short-sighted”, while a group of opposition deputies has objected, saying that the revision gives disproportionately “strong decision-making powers to regional governments without additional and trustworthy possibilities of control,” and have called on Slovak President Ivan Gašparovič to veto the law.

“The goal is to adjust professional education and preparations to the needs of the labour market, increase the number of graduates from secondary professional schools and increase the interest of elementary school students in studying at these schools, while supporting study in fields which are required by the labour market but currently have a low number of students,” Čaplovič commented, as quoted by public broadcaster Slovak Radio on September 20.

The changes to vocational education give new powers to VÚCs to decide the number of new first-grade classes that will open each year in all public and private schools. Thus regional governments will have a direct influence on the competition between public schools, private schools and church-run schools, the SITA newswire reported. Non-state schools will be able to open new classes exceeding the quota approved by the regional government only if they fund them entirely from their own budget, i.e. without any state contribution. The decisions of the VÚCs, according to the ministry, should be based on analyses and forecasts of developments in the labour market.

“Regional governments will, despite the possibility of a conflict of interest, get the power to decide on the existence of schools and school facilities established by church and private founders,” opposition deputies argued in their letter to President Gašparovič.

Education Ministry spokesman Michal Kaliňák told The Slovak Spectator that the ministry had a sympathetic ear for suggestions from bodies representing foreign investors and employers since “we hear from them that the Slovak economy and employers need well-trained people who need good grounding not only in terms of practical preparation but also theory”.

Ctibor Košťál, director of the Slovak Governance Institute, a think tank, sees a problem in the fact that one schools provider – i.e. local government – will be gaining power over the other providers – i.e. private founders and churches. He said this cannot be fixed by additional regulations.

According to him, one can discuss the importance of different founders but “the Slovak reality is that we have created a system of several providers who do not profit from the system but provide education of the same quality for our children”.

“Thus it is undesirable for local governments to be in any way enjoying benefits over others, be it through finances or authorities,” Košťál told The Slovak Spectator. “The number of first-grade classes must be decided based on the interest of students in particular schools and not in an administrative way, where someone decides which provider will be providing education in a given region.”

According to the opposition deputies, the changes will also affect after-school activity programmes, the financing of which will be completely in the hands of the regional and municipal governments.

The opposition deputies, Miroslav Beblavý of the Slovak Democratic and Christian Union (SDKÚ), Árpád Érsek of Most-Híd, Martin Fronc of the Christian Democratic Movement (KDH), Martin Poliačik of Freedom and Solidarity (SaS), Richard Vašečka of Ordinary People and Independent Personalities (OĽaNO) and independent deputy Jana Žitňanská, say that the use of taxpayers’ money that regional and municipal governments receive to finance after-school activity programmes must be clearly defined.

Kaliňák explained that the Association of Towns and Villages, the Association of Employer Unions (AZZZ), as well as the SK8 association of self-governing regions, submitted their comments to the proposed revision and expressed support for the changes approved by parliament on September 20.

Gymnasiums only for top students?

The revision means that as of September 2014, entrance examinations for gymnasiums will become compulsory and only pupils who achieve more than 90 percent in national tests for maths and Slovak will be admitted. This year such test results were achieved by only 715 of the 40,000 ninth-grade pupils who took the tests.

The measure also stipulates that only pupils with a grade-point average of 2.0 can be admitted to gymnasiums, while secondary professional schools should admit only students who obtain an average of 2.75 or better. In Slovakia, school pupils are graded according to a five-point scale on which 1 is excellent and 5 is a fail.

Pupils’ average performance should be calculated from their grades in mandatory subjects during the second semester of the eighth grade and the first semester of the ninth grade, according to SITA.
“I consider it a step back and a short-sighted decision which puts a large group of children at a disadvantage,” Košťál told The Slovak Spectator, adding that at the same time the change will lead to artificial hunting for grades, which goes against the modern understanding of education.

According to Košťál, the education system should not be oriented towards better or worse students but instead should focus on providing a good quality education at all levels while leaving it to students to pick the orientation they envision for themselves. At the same time, it is necessary to prolong the time spent in general education, while delaying decisions on specialisation, he added.

“Thus I am fundamentally against [the change], and this is why I think that the goal should be good and competitive schools and not division of students between good and worse schools,” Košťál said.
Kaliňák said that the support of the professional community has already been considerable, for example in relation to defining conditions for the entry exams, such as grade averages, and for the idea of opening 55 new study programmes at gymnasiums as early as this year.

As for the impact the changes will have on gymnasiums, Kaliňák said that the ministry views these schools as preparation for study at university.

“We have just set those conditions and criteria that create the best possible picture about every applicant to the secondary grammar school as well as the school [they are coming from], because along with defining the average also a monitoring and maturity certificate will make it into the evaluation criteria,” Kaliňák told The Slovak Spectator, adding that the schools might also consider the results of students in various competitions.

Responding to critics who argue that some schools might be stricter in their grading system than others, to the detriment of the former’s pupils, Kaliňák responded that assessment of students will rely on the professional responsibility of individual teachers. He also argued that the results of national monitoring of students’ performance will be taken into consideration as well and “it is a criterion which cannot be questioned and does not reflect any sympathies or antipathy of the teacher towards students”.

According to Kaliňák, this is why the ministry approved a two-year transition period to the application of the rules, so that all students and schools will be able to prepare efficiently for it.

As for changes which would benefit the education system but did not make it into the revision, Košťál listed a reduction in bureaucracy and complete digitalisation of education. In terms of the areas where there is a need for more money and for more effective application of European funds, he highlighted the transformation of special schools and classes with a higher proportion of pupils from disadvantaged backgrounds.

Košťál also argued that there is a need to rationalise secondary education through merging schools and cancelling some departments, and to reduce the current range of administrative units such as regional education offices and other related institutions such as the State Schools’ Inspectorate.

More effective collection of information about schools and students with the goal of improving the quality of specific institutions would be a desirable change as well, according to Košťál.
The analyst also suggested that it could be beneficial to create a model which would attract teachers with less experience and “to introduce a stable and understandable system of career growth, along with sufficient financial resources to secure its functioning”.

A complete liberalisation of textbook policies and an increase in the share of decisions that are left to schools, teachers, parents and students also made it onto Košťál’s list.