It is possible that in a few years time people in Slovakia will recognise certain dog breeds only from pictures found in books or on the internet. In response to a rash of dog attacks that has flooded the Slovak media in recent months, the Agriculture Ministry plans to ban the breeding and owning of two dog breeds and restrict conditions for owning another 13 as of April 1, 2013. 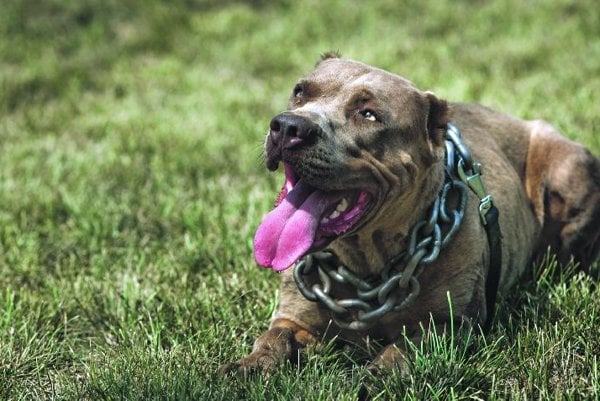 A Bandog, one of the breeds being discussed. (Source: SME)
Font size:A-|A+  Comments disabled

It is possible that in a few years time people in Slovakia will recognise certain dog breeds only from pictures found in books or on the internet. In response to a rash of dog attacks that has flooded the Slovak media in recent months, the Agriculture Ministry plans to ban the breeding and owning of two dog breeds and restrict conditions for owning another 13 as of April 1, 2013.

“It was really unbearable to watch how many people have recently been attacked [by dogs],” said Magda Tóth Želeňáková, the spokesperson for the ministry, as quoted by the Sme daily.
She referred to around seven dog attacks that occurred between August and September 2012. The most serious case occurred in Sucháň, Veľký Krtíš district, when a Pit Bull attacked its 45-year-old caretaker while she was taking it for a walk. The woman was found dead the next morning.

Yet, not everybody welcomed the changes presented by the Agriculture Ministry. Experts and dog handlers warn that the new laws pertain only to pure breeds and may actually punish responsible owners who observe the laws.

The biggest changes to the current legislation pertaining to dog ownership, passed in 2002, will be the establishment of three categories of dogs: “unacceptable” dogs, dogs with restricted ownership conditions, and dangerous dogs.

The first category, “unacceptable” dogs, includes breeds and cross-breeds which “are not listed in a studbook or in the register managed by the authorised organisation [i.e. kennel organisation]” and which have been “bred for fighting, pursuit or guarding”, reads the amendment to the law, which has already been submitted for interdepartmental review. This category will include two dog breeds: Pitt Bull Terriers and Bandogs.

The amendment prohibits the breeding and owning of these breeds. An exception will be made for dogs born before April 1, 2013. Owners will have to have dogs born after this date castrated or exported abroad.

The second category will include dog breeds and cross-breeds which pose a serious risk to the health or life of people or animals (for a list of the dog breeds with restricted ownership conditions see the table below).

This category does not include Rottweilers which, according to the ministry, have not been responsible for any attacks in the last few years, Sme wrote.

“The breeds were selected based on expert documents provided by the Slovak Kennel Club (SKJ),” the Agriculture Ministry explained in its official statement.

Yet, the SKJ has joined the critics of the amendment, warning that it mostly addresses pure breeds and overlooks problematic cross-breeds, Sme wrote.

Moreover, statistics show that since 2007 there have been at least four dog attacks caused by Rottweilers. The last one occurred in August 2011, when a Rottweiler attacked a 36-year-old woman in Košice, the TASR newswire wrote.

The last category is to include dangerous dogs, which the law defines as any dog that has bitten or injured a person without being attacked or provoked, and makes an exception for dogs that act in self-defence.

The ministry added that the authorities will decide whether to include a dog in this category during infringement or criminal proceedings.

Alexander Berek from Special Canine Rescue Service Slovakia does not assume that the prohibited dog breeds have been responsible for all the attacks that have occurred in Slovakia over the past few years. He assumes that the amendment might serve as a kind of “prevention”.

He explained that the Bandog was bred in the US for protection of people and their property. The dog might become dangerous especially in situations when it has an owner who is irresponsible or unable to manage it.

As for the American Pit Bull Terrier, it was originally bred for dog fights, and in fact became the victim of people who trained it specifically to fight dogs, Berek said.

“Under other circumstances it might be considered [a breed] loyal to its owner and a good companion,” he told The Slovak Spectator.

What else will change?

The amendment to the law pertaining to dog ownership comes with several other changes. For example, the owners of dogs included in any of the three categories will have to undergo special dog training. Moreover, only people with a special permit will be allowed to walk these dogs in public.

The owners will also be required to prepare an appropriate environment for the dogs, which will have to be approved by kennel organisations assigned by the Agriculture Ministry.

This organisation, together with municipality representatives, will also have to check at least once a year to make sure that dog owners are observing the laws. Moreover, they will also have to approve, together with the regional veterinary and food office, whether the environment for the dogs meets specifications, and to establish a list of people who have passed the special training, the law states.

In addition, fines for irresponsible dog owners will increase. If someone fails to report an attack caused by his or her dog, he or she will have to pay €200, instead of the current nearly €16.60. Those who fail to register their dogs will be fined €400, instead of the €165 they have to pay at the moment.

People who have not obtained the special permit to own dogs included in any of the three categories will be subject to the steepest fine, €1,000, the amendment states.

Berek said that there are both positive and negative aspects to this amendment. He praised the ministry for specifying the bodies which will be responsible for enforcing different aspects of the law, as well as for maintaining a publicised record of dog owners who have the special permit. On the other hand, he said that in some cases responsible dog owners could potentially pay for the mistakes made by irresponsible owners who ignore the law.

Berek also said that even though there are already several regulations pertaining to dog ownership, there is a lack of enforcement. According to him, the authorities are now trying to find a way to solve this problem, which has been neglected for some time.

We cannot be hasty when devising these laws, said Berek, adding that it would be better to prepare a long-term plan to solve the problems more systematically.

Other countries have restrictions too

Slovakia is not the only country that restricts the ownership of certain dog breeds. Several countries have already established lists of breeds whose breeding and ownership must be regulated.

Denmark, for example, prohibits breeding, owning and importing 13 dog breeds and their cross-breeds. The country also bans tourists from bringing any of the prohibited breeds into the country, according to the official website of the Foreign Affairs Ministry.

Great Britain has a law prohibiting the breeding of certain aggressive breeds, while Sweden bans its inhabitants from keeping such breeds, reads the website of the Agriculture Ministry.

Lists of 36 dangerous dog breeds also exist in 12 of the 26 Swiss cantons. In Liechtenstein they restrict the owning and breeding of 14 dog breeds. When taken for a walk, they must be placed on a leash and wear a muzzle. When they are nine-months old they have to undergo a special examination, the results of which will determine whether they are socially adaptable, the Pravda daily wrote.

In France there are two categories of dogs. The first one includes so-called fighting breeds, whose breeding or import is prohibited, except for dogs registered before 2010. The second category includes dogs used for protection or guarding, who have to remain on a leash and wear a muzzle if their owner takes them for a walk.

On the other hand, there are also countries which have abolished dog breeding and ownership laws. For example, Italy abolished its list of 135 dangerous breeds after it discovered that the number of attacks had not decreased despite stricter conditions, according to Pravda.