One first and one last at Konvergencie festival

THIS YEAR the international music festival Konvergencie / Convergences witnessed a first for the music scene and a last for Slovakia. For the first time since it was released, the legendary 1970s album Zelená pošta / Green Post was performed live (except for a few tracks including the poem Smutná ranná električka / Sad Morning Tram). Meanwhile the Hilliard Ensemble, which performed at the festival in 2000 with Jan Garbarek, announced that it was splitting up, making the band’s recent concert in Bratislava probably its last in Slovakia. 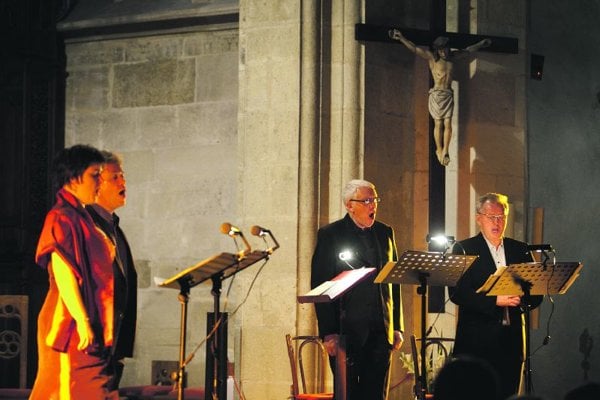 THIS YEAR the international music festival Konvergencie / Convergences witnessed a first for the music scene and a last for Slovakia. For the first time since it was released, the legendary 1970s album Zelená pošta / Green Post was performed live (except for a few tracks including the poem Smutná ranná električka / Sad Morning Tram). Meanwhile the Hilliard Ensemble, which performed at the festival in 2000 with Jan Garbarek, announced that it was splitting up, making the band’s recent concert in Bratislava probably its last in Slovakia.

The Hilliard Ensemble (Monika Mauch – soprano, David James – countertenor, Steven Harrold – tenor, and Gordon Jones – baritone), one of the most successful vocal ensembles in the world, performed with French violinist Muriel Cantoreggi at a special concert at Convergences on September 17.

“When they announced at the beginning of this year that they wanted to wind up their active concert career, my feelers got alarmed and I said to myself that we should do something about it [so] we invited them and their Morimur project,” founder and artistic director of the festival Jozef Lupták said, as quoted by the Pravda daily.

The ensemble’s Morimur project presents Bach’s compositions for solo violin and chorals as mystical music with hidden meanings, Lupták said at a press conference before the festival. A beautifully lit St Martin’s Cathedral, where the concert took place, underscored this mysticism all the more. In spite of the packed church there was dead silence at times and the performance was rounded off by frenzied applause. Convergences’ concerts in the cathedral, where the kings and queens of Hungary were once crowned, have a special atmosphere (and good acoustics too) and have become an inherent part of the event.

The very first event of the festival was the opening of the exhibition of Slovak artist Milan Adamčiak, celebrating the birthday of avant-garde American composer, writer and artist John Cage on September 5. The exhibition, called Milan Adamčiak: Something for Cage, commemorated the 100th birthday of the outstanding artist, who visited Slovakia in person shortly before his death in 1992 (at the invitation of Adamčiak, the latter told a press conference). The exhibition was open to the public until September 23 at the Konvergencie main venue, in the design factory exhibition space.

The festival’s opening also featured a performance by the Veni ensemble and studEND.doc music bodies led by Daniel Matej, who played works by both John Cage and Milan Adamčiak, including a premiere of Adamčiak’s new work Raraga. Another “homage a Cage” was a concert of his Sonatas and Interludes for prepared piano (1946-48) performed by Nora Skuta on September 20, called A Cage Full of Music. A British reviewer for BBC Music Magazine, Roger Thomas, included her interpretation of this cult work for the Hevhetia label in the book “1001 Classical CDs You Must Hear Before You Die”, the www.konvergencie.sk website wrote.

“The 13th year of the festival is special in that we have taken a step into unknown territory,” Jozef Lupták said at the press conference. “Those who regularly attend the festival know that it is a festival of chamber music and classical music of the 20th century but performed by duets, quartets, etc. This year, we prepared seven solo recitals, mostly by people who have played at the festival for some years already, so that we can look at their music from a slightly different perspective. We tried it already in June in Košice, and I have the impression that it worked well,” he concluded. “Each of the solo programmes was prepared by the performer himself, with the idea that it should nevertheless incorporate the values and philosophy of Convergences: combining the uncombinable, or a programme that is not often played – something that cannot be heard every year or every month,” he added.

Accordionist Boris Lenko, who works with Lupták on many projects, completed the series of seven recitals on September 22 with the appropriately named concert Homo Harmonicus. Lenko, who is a versatile musician performing everything from the classical music repertoire, through contemporary music, to various cross-over projects such as Požoň sentimentál, Phurikane giľa, ALEA, Chassidic Songs and Triango, opened the recital with works by Johann Sebastian Bach and Domenico Scarlatti. He continued with extracts from Hungarian composer György Ligeti’s Musica Ricercata. This was followed by a performance of his own works, one of which, called Arwa, according to Lupták, was finished only hours before the recital itself. For the last piece, Lenko played Road Runner by American avant-garde composer John Zorn.

Lenko played in all three performances on the Saturday evening of the festival. He played in a musical-literary piece Dúverná Zmlúva čiže Hľadanie Politickej Vôle (A Confidential Pact or Searching for Political Will) based on a book by Juraj Fándly, a Catholic priest and supporter of the reforms of Emperor Joseph II. Here Lenko, in the role of the devil Titinillus, played alongside Lupták, acting the part of angel Athanazisu, and Silvester Lavrík, co-author of the piece and the narrator. This performance was followed by Homo Harmonicus and a final piece, which saw Silenzio Lenko join musicians Milan Paľa and Marián Svetlík on violins, Peter Vrbinčík on viola, and Lupták on cello.

Lenko’s website features a quote by clarinettist Giora Feidman: “I thought that the accordion was a terrible instrument. Until I heard Boris…”. This sentiment couldn’t be more true and Lenko’s Saturday performances confirmed it once again.

As the September 23 evening concert Green Post, featuring Slovak rock/pop performers from Collegium Musicum including Pavol Hammel, had sold out so quickly, organisers added one more concert for 17:00. Green Post is an album released in 1972 by Collegium Musicum, from which Hammel, Marián Varga and Fedor Frešo – members of the then and current line-up – parted ways soon after its release. The album had never previously been played live, thus fitting perfectly with the idea of “not often performed” pieces, and was a superb culmination not only of the festival itself but of the Bratislava Cultural Summer.

Most of the tracks from the album were brought to life by the current line-up of Collegium Musicum: Marián Varga and Peter Preložník (as guest) on keyboards, František Griglák on electric guitar, Martin Valihora on drums, and Pavol Hammel as guest singer. The tunes, the lyrics by Kamil Peteraj and Boris Filan, and also the album’s poem, by Miroslav Válek, seem to be immortal; after 40 years they still managed to receive a standing ovation from the audience, and the band performed two encores. Apart from songs from Green Post, the musicians also played older tracks by Collegium Musicum and Hammel’s band Prúdy.

Green Post’s energetic rock, classical influences, and subtle traces of psychedelia seem to span decades and be truly timeless. The successful concert then continued to Banská Bystrica and Košice, where one more gig had been added due to enormous interest.