Alcohol to be sent back

SLOVAKIA will continue to enforce its ban on Czech alcohol and return to the Czech Republic approximately 150 trucks containing two million bottles of alcohol imported from its western neighbour, in an effort to rid the country of potentially dangerous liquor. The Slovak government halted the import of Czech spirits with more than 20 percent alcohol content on September 18, after its neighbour reported more than 20 deaths from methanol-laced alcohol. 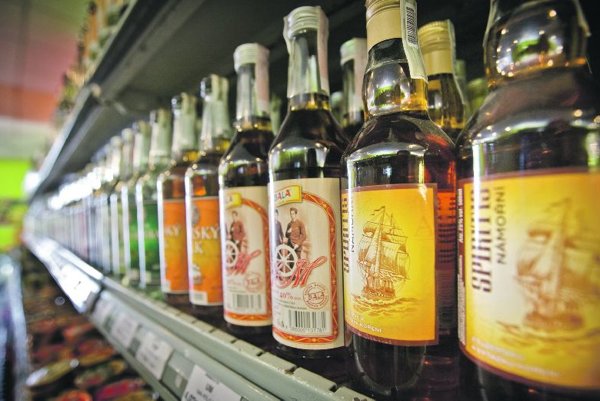 SLOVAKIA will continue to enforce its ban on Czech alcohol and return to the Czech Republic approximately 150 trucks containing two million bottles of alcohol imported from its western neighbour, in an effort to rid the country of potentially dangerous liquor. The Slovak government halted the import of Czech spirits with more than 20 percent alcohol content on September 18, after its neighbour reported more than 20 deaths from methanol-laced alcohol.

Slovakia’s ban will remain in effect despite the fact that the Czech Republic has lifted its prohibition on alcohol produced before January 1, 2012, since Czech police arrested the people suspected of producing the methanol-laced spirits and located the source of the poisoning. Nevertheless, the plan of returning the Czech alcohol has struck a raw nerve with alcohol importers in Slovakia.

“The risk is still big and it would be a huge mistake if we allowed the imports of Czech spirits to Slovakia,” Agriculture Minister Ľubomír Jahnátek told a press conference held on October 2, referring to yet another case of methanol poisoning that occurred on October 1.

While explaining the reasons for continuing the ban, Magda Tóth Želeňáková, the spokeswoman for the Agriculture Ministry, said that “people’s lives are more important than business” and that the ministry would consider changing its attitude after all the affected alcohol is returned to the Czech Republic. The methanol crisis committee will then meet to make a decision.

“Every new bottle imported to Slovakia in the future will have to have a special certificate of origin,” Tóth Želeňáková told The Slovak Spectator, explaining that the ministry will require the origin of the alcohol to be indicated on the label and that suppliers not meeting this condition will not be allowed to do business with Slovakia.

Moreover, the Finance Ministry will prepare measures that will restrict conditions for selling the alcohol, regardless of its origin. For example, shops will be banned from selling spirits with more than 20 percent alcohol in plastic bottles or wooden pots, Jahnátek told the press.

The alcohol sold will have to be marked with invisible stamps containing the most pertinent information about the alcohol.

Customs officers with special scanning devices will be able to read the stamps in order to obtain information about the date of origin, the name of the producer and the type of alcohol, according to Finance Ministry State Secretary Peter Pellegrini.

The government is also considering creating a single, state-controlled printer of stamps since there are currently three of them, some of which are located abroad, which could increase the risk of forgery, Pellegrini told the press.

Producers who fail to observe these measures will face stiffer fines than the current €500 penalty. The highest penalty would be closure of the outlet, Tóth Želeňáková told The Slovak Spectator.

However, some firms have criticised the plans and say they are considering lodging complaints against Slovakia at the European level for violating the free movement of goods within the EU.
“If a producer shows that a product is not health threatening … [sending it back] is unreasonable,” said Martin Pučalík, sales manager for alcohol producer Ján Becher – Slovensko, as quoted by the Sme daily.

Andrej Králik, head of the press and political section of the Representation of European Commission in Slovakia, says the country can limit the free movement of goods only if it provides evidence that this limitation is justified. Thus the Slovak government will have to prove that the planned measures are necessary and will really protect public health, Sme wrote.

The idea of returning bottles is unrealisable, according to Roman Pócs, head of the importers section of the Slovak Association of Commerce and Tourism (ZOCR). Moreover, if it proves that the alcohol is safe the whole procedure might be unlawful, he added. ZOCR is preparing a webpage where customers will be able to check whether they bought a legal product.

“Nowadays, we cannot act based on the standard models since a non-standard situation has occurred which has resulted in 27 dead so far,” said Jahnátek, responding to alcohol producers’ complaints.
He argued that returning most of the spirits to the Czech Republic will not be complicated since about 50 percent of the alcohol imported from the Czech Republic has been stored in warehouses.
Moreover, about 90 percent of the remaining spirits are distributed by the 10 biggest suppliers, so the government will also be able to track down this alcohol, he added.

Pellegrini added that Slovakia already has several methods for withdrawing goods from the market. For example, when parliament adopts new taxes on tobacco, shops must withdraw the cigarette packs with old prices printed on them.