“OPEN FOR Everything” was not just the title of the opening piece at the Divadelná Nitra international theatre festival, but also a description of the festival’s audiences: from dance/body theatre, through screenings and multi-media, to “documentary theatre” and research, the plays performed between September 21 and 26 offered anything but classical drama. 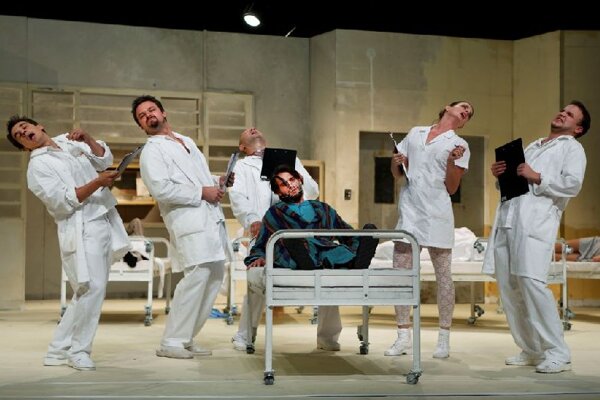 “OPEN FOR Everything” was not just the title of the opening piece at the Divadelná Nitra international theatre festival, but also a description of the festival’s audiences: from dance/body theatre, through screenings and multi-media, to “documentary theatre” and research, the plays performed between September 21 and 26 offered anything but classical drama.

There was, however, plenty of live music on stage, suggesting that the prevailing tendency to use the most modern technologies shifted to a return to old-fashioned live bands.

“We were surprised [when selecting the plays for the festival programme] how strongly the motif of guilt/innocence resonates in modern authors and their works,” head of the Divadelná Nitra, Darina Kárová, told a press matineé on September 22. “We didn’t have to squeeze the form [i.e. the found theatre pieces] to fit the pre-set issue at all. But then we had to decide whether we also pick some classics, and in the end, we opted for the modern drama; so all the 13 plays of the main festival’s programme [including the so-called “Festival Plus”, the play Pohania/Pagans directed by Marián Amsler, which was picked after its success in the Dosky /Boards award] are all contemporary texts, often made specifically for the production concerned, and often resulting from field research or being based on true events. The festivals’ works connect several types of innocence and guilt.”

Miro Zwiefelhofer, from the festivals’ Art Council, noted that one of the criteria for the selection of works was whether they were a good fit for the theatre; he said that the Andrej Bagar Theatre in Nitra was built for classical theatre where audiences sit in a pit and does not allow for some more experimental, modern shows with auditory aspects or with pioneering stage settings which require interaction between audience and performers.

One of the more intimate, yet very sophisticated, pieces which used up-to-date technology was the play Mraky / Clouds by Czech Veronika Švábová and Handa Gote Research & Development. As well as the title of this one-woman-show, “Clouds” is the name of a cake baked by Švábová’s grandmother (and also by the writer herself directly on stage afterwards, served to audiences with coffee or tea). The show deals with reminiscences and explorations, delving deep into the past of both sides of her family, encompassing the transportation of Jewish relatives denounced by neighbours on one side, and fanatic communists later executed in the political trials surrounding the top officials around Rudolf Slánský in the 1950s on the other side. Amazing, breathtaking life stories are pieced together from fragments found in the house “where my family never throws out anything” and reflect the complex and abrupt twists in the history of the Czech territory within just a few decades.

The Hungarian play, Anamnesis, on the other hand, is a “black comedy”, a farce focusing on the state of affairs in the health care system. In Anamnesis, a classical theatre troop (József Katona Theatre) and an independent theatre troop (Sputnik) cooperate, dance, sing, play live music (which strongly resonates and complements other dramatic elements), talk, and perform. Parts of the show feature video recordings of televised debates between experts on the health care system. As this issue strikes a raw nerve with Slovaks, too, the audience’s response was enormous and spontaneous, as was the debate the next morning.

The Dosky / Board awards are annually bestowed on the best performances in the theatrical world. This time round, two plays received two awards each: The Best Staging of the Season award went to the dramatised version of Juraj Rozner’s novel Seven Days to Funeral (showing in Slovak Chamber Theatre in Martin), with its main performer, Dano Heriban, getting the Board for Best Actor; while Marián Amsler won an award for directing the play Pohania / Pagans by Anna Yablonovska (performed at Slovak National Theatre – SND – in Bratislava), for which Božidara Turzonovoá was awarded Best Actress. The Best Stage Design went to Pavol Andraško for A Behanding in Spokane by Martin McDonagh, also at the SND. Meanwhile, the Best Costume was made by Marija Havran for the project Sláva Daubnerová “Illuminarium” in the P.A.T. Theatre, and the Best Music was composed by Jozef Vlk to accompany the dance performance Rose/3Balet of Balet Bratislava. Finally, The Find of the Season went to Ivana Kubáčková as Hanni in Ingmar Villquist’s Such a Nice Girl Like You.

According to the festival organisers, a total of about 12,000 people participated in the festival, 4,500 of whom made up the plays’ audiences, with a further 7,500 participating in one way or another in the accompanying events.

“We perceive the rate of visitors as very good. Many of the theatre writers and performers praised the response of the open and very spontaneous audience,” Kárová said. “I think we [the organisers] can be satisfied, concluding from the reactions of festival guests and visitors’ reactions. It is also crucial that the expert public appreciated the programme and evaluated its title guilt/innocence as very interesting,” Kárová concluded.

It seems that, in spite of some desperate claims to the contrary, Slovak theatre is far from dying out or playing just for a handful of friends and connoisseurs. Even in the era of TV series and reality shows, people still go to theatres, it seems.