A rare fresco, accidentally discovered during the reconstruction of the St Emeram’s Cathedral at Nitra Castle, will be made accessible to the public – but only temporarily. 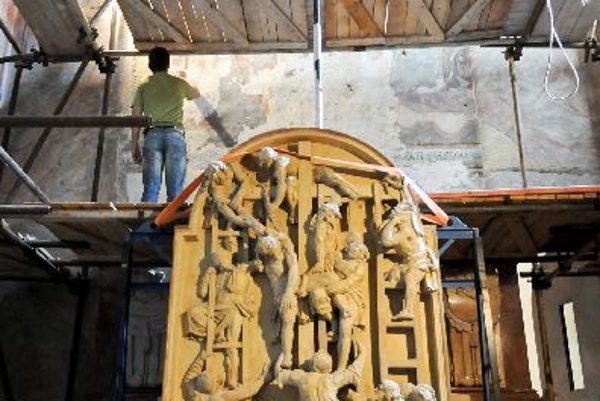 A rare fresco, accidentally discovered during the reconstruction of the St Emeram’s Cathedral at Nitra Castle, will be made accessible to the public – but only temporarily.

Later, it will be covered again by the altar under which it was found. Restorers asked the Regional Monument Board in Nitra to approve the moving of the fresco to another wall in the cathedral, but were turned down. The conservationists say international agreements do not allow for this; they stipulate that each monument is inseparable form the place where it was put. Due to the request of Nitra Bishop Viliam Judák, the rare fresco will be available to the public at weekends for some time. Then, it will be concealed by the restored altar of Joannes Pernegger, which was put into the lower nave of the cathedral in 1662.

According to the restorer Vladimír Plekanec, the fresco dates back to the 14th century and is an exceptional artwork which has no parallel in Slovakia. It is probably an Italian production from somewhere such as Tuscany or Umbria. The whole work has to be evaluated by experts, he told the TASR newswire. The fresco depicts the Marian cycle, expressed in a way unique to this region. Individual pictures are not separated and so the whole three-part scene makes a single picture, Plekanec concluded. It describes the life of Virgin Mary on Earth and also after her Assumption.