“ABSOLUTELY realistic” is how Prime Minister Robert Fico described the draft state budget that his cabinet sent to the Slovak Parliament on October 10, adding that it guarantees Slovakia a position at the core of the eurozone. The government will attempt to keep the budget deficit under 3 percent of gross domestic product (GDP) despite a gloomier-than-expected prediction that the state will collect €233 million less in tax and payroll tax revenues next year. 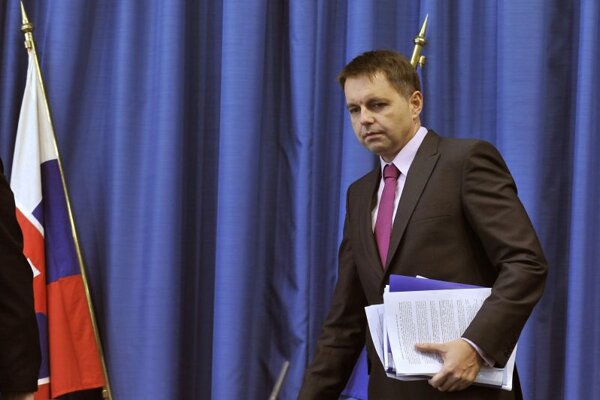 “ABSOLUTELY realistic” is how Prime Minister Robert Fico described the draft state budget that his cabinet sent to the Slovak Parliament on October 10, adding that it guarantees Slovakia a position at the core of the eurozone. The government will attempt to keep the budget deficit under 3 percent of gross domestic product (GDP) despite a gloomier-than-expected prediction that the state will collect €233 million less in tax and payroll tax revenues next year.

Interior Minister Robert Kaliňák said that finding a minister who is entirely satisfied with the budget would be difficult, but his colleagues know that they have to live with it. The parliamentary opposition parties called the draft unfair and discouraging.

“We are preparing the budget for 2013 in a special, crisis period; in a time when it is very difficult to estimate tax incomes,” Fico told the press, as quoted by the TASR newswire, adding that in this time period it is not possible to eliminate crisis factors, which could change the budget. “Yet, I do not have the feeling that the situation today is such that anyone will be banging on the table.”

The Fico team planned budget reserves of almost €550 million to enable them to respond to eventual potential crises arising, for example, from worse than predicted economic performance. The budget is constructed from the Finance Ministry’s revised estimate for Slovakia’s economic performance, presented on September 12, of 2.1 percent growth in 2013, according to the government’s official report.

Of the €550-million safety reserve to tackle possible economic challenges, the cabinet hopes to get €229 million through reopening the second private pillar of Slovakia’s pension scheme, expecting a number of contributors to switch to the pay-as-you-go system while taking along part of their payroll taxes to the state-run social insurer. Nevertheless, the government will get the exact figures only next spring.

“We walked the path we had very clearly defined at the beginning,” said Fico as quoted by the SITA newswire. “First of all we are consolidating and will consolidate at the expense of banks, monopolies and large firms. We rejected hiking VAT; this path we will not walk.”

The government has already approved an increase in corporate income tax from 19 to 23 percent while individuals earning more than €3,246 per month will see their income tax rate go up from 19 to 25 percent, which effectively puts an end to Slovakia’s 19-percent flat tax, at times considered one of the country’s biggest strengths in the eyes of foreign investors. Other measures imposed include a special levy for companies doing business in regulated sectors and an increase in a similar levy already imposed on banks in line with Fico’s statements that he wants to see companies with high profits contribute more to state coffers.

An extra monthly levy of 0.363 percent, or 4.356 percent per annum, on profits exceeding €3 million per year will affect companies that derive 50 percent or more of their total revenues from operations in regulated markets such as energy, insurance, health insurance, electronic communications, postal services and transport. The measure, which came into effect at the beginning of September and will remain in force until the end of 2013, should raise an additional €25 million by the end of 2012 and €100 million during 2013, the TASR newswire wrote after parliament adopted the legislation on July 26.

Parliament also extended the basis on which banks in Slovakia pay an existing special levy. While banks have been paying a levy at a rate of 0.4 percent on corporate deposits since the start of 2012, they now must pay it on private individuals’ deposits as of September 1, 2012. The government expects the measure to bring in additional income of €27.5 million this year and an extra €110 million next year. This is also designed to be a temporary measure and will end once banks have paid a total of €1 billion. The level of the levy is set to drop as the amount raised increases.

In total, the state plans to collect €1.64 billion on new taxes and levies in 2013, the Sme daily wrote.

Thus the government is shooting for public finance deficit at 2.9 percent in 2013 while one year later the number should stand at 2.4 percent and in 2015 the deficit should be 1.9 percent of GDP, TASR reported.

When asked about the ambition of the government to keep the deficit under 3 percent, Radovan Ďurana of the Institute of Economic and Social Studies, an economic think tank, told The Slovak Spectator that he sees risks mainly on the revenue side. According to Ďurana, 2009 showed that a slowdown in the EU can significantly impact the public finance balance.

“Also for this reason it would be more appropriate if curbing the deficit relies on cutting expenses and not increasing revenues,” Ďurana said earlier in October.

The prime minister called on the opposition to be realistic, while adding that he expects some of them to bring to parliament some “folk artistic creativity”.

Deputy chairman of the Slovak Democratic and Christian Union (SDKÚ) Ivan Štefanec said that the government should have submitted the budget along with an apology to citizens.

“It increases taxes, payroll taxes, fees for people and is taking from contributors to the second pillar,” Štefanec said, as quoted by SITA, adding that the budget lacks motivation for development and for those who want to work and get an education.

According to Štefanec, the budget will take the greatest toll on entrepreneurs and the self-employed. Most-Híd MP Ivan Švejna added that the budget discourages people from running businesses and making money.
“It will have very negative impacts and I do not share the optimism of the government that it will fill the revenues of this budget,” Švejna told SITA, while insisting that the consolidation should happen on the spending side of the budget.

Several cabinet ministers said that they will not see money that they had been hoping to get. Kaliňák has said that everybody will have to adjust in order to keep Slovakia among the more fiscally responsible states. His colleague, Environment Minister Peter Žiga, noted that his department is not even getting as much as it had received in 2010, adding that it is certainly not enough money, according to TASR.

“The budget has not pleased us, but we have to live with it,” said Economy Minister Tomáš Malatinský while his colleague, Agriculture Minister Ľubomír Jahnátek commented that “I could imagine better, but I accept the decision of the cabinet”, while describing the current state of his department as one of “misery”.

Transport Minister Ján Počiatek said that it might seem that his department received more money for 2013 than it had this year but explained that the increase is only due to an increase in European funds and money linked to co-financing, TASR reported.

Some ministries get more, some get less

When it comes to individual ministries, the Education Ministry is supposed to get €2.46 billion, which is €30.3 million more than in 2012. The Transport Ministry can count on expenditure of €2.29 billion, which is an annual increase of €162 million. The better portion of the expenditures, €2.036 billion, is planned to be used for the development of road and railway infrastructure. The Labour, Social Affairs and Family Ministry should get €2.17 billion, which is €175 million more than in 2012. The Environment Ministry will have at its disposal €604 million, a 57 percent increase. Out of the projected funds, as much as €534 million is accounted for by EU funds and co-financing from the state budget, the SITA newswire wrote.

The Finance Ministry will receive 28 percent more as its expenditures are proposed to be almost €662 million, and the expenditures of the Economy Ministry are projected at €302 million. Compared with 2012 this means an increase of almost 41 percent.

The Health Ministry budget is projected to be €4.06 billion, an increase of €130 million compared with 2012; economically active people should contribute the most to this increase via higher compulsory health insurance payments.

The Culture Ministry should get €7.5 million more than this year, i.e. €188.7 million. The Justice Ministry should get more too, up by €11.3 million to €314 million, while the funds should be used to improve the catastrophic situation in Slovak prisons. And the Interior Ministry should have at its disposal €902.1 million, an increase by €0.402 million compared with 2012.

The Defence Ministry will have to cope with a reduction of €50 million compared to the 2012 budget, when its expenditures were projected at €748 million. The Agriculture Ministry will get €1.25 billion, €163 million less than this year. The Foreign Affairs Ministry should also get less than this year: €117 million, a drop of €5.6 million compared with 2012.