SEVERAL Slovak politicians appearing lately on TV talk shows have been confronted with the question: “Would you be able to live on €300 a month?” The question came on the heels of a European Union survey, which suggested that 700,000 Slovaks, or 13 percent of the population, were at risk of poverty in 2011. Compared to 2010, the number people living on the edge of poverty – defined as less than €3,784 per year, or just over €315 per month – had grown by approximately 50,000, according to the EU’s Statistics on Income and Living Conditions (SILC) survey. The survey was published by the Slovak Statistics Office on October 2. 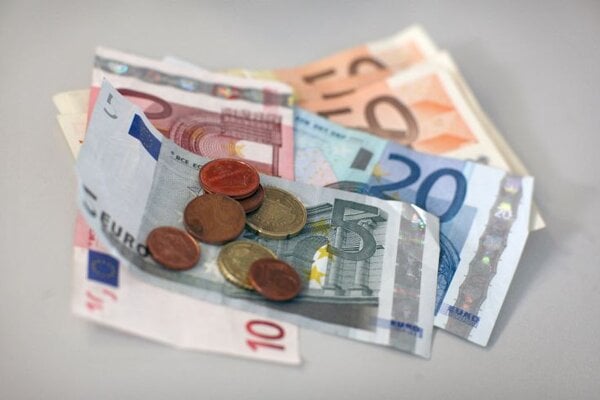 Could you live on just over €315 per month? (Source: Sme - Tomáš Benedikovič)
Font size:A-|A+  Comments disabled

SEVERAL Slovak politicians appearing lately on TV talk shows have been confronted with the question: “Would you be able to live on €300 a month?” The question came on the heels of a European Union survey, which suggested that 700,000 Slovaks, or 13 percent of the population, were at risk of poverty in 2011. Compared to 2010, the number people living on the edge of poverty – defined as less than €3,784 per year, or just over €315 per month – had grown by approximately 50,000, according to the EU’s Statistics on Income and Living Conditions (SILC) survey. The survey was published by the Slovak Statistics Office on October 2.

According to observers, the results of the survey come as no surprise and can be partly attributed to the toll that the economic crisis has had on the country.

“The increase in the number of people threatened by poverty can be unambiguously attributed to the increase in unemployment and insufficient social protection of the unemployed, as well as to the increase in the number of people who saw their income fall in consequence of being forced to work part-time, which at times was a fair strategy of firms to protect their employees from layoff,” Zuzana Kusá, a sociologist with the Slovak Academy of Sciences, told The Slovak Spectator.

Kusá explained that the survey findings in fact reflect developments in 2010, when the main consequences of the financial and economic crisis came to be felt in Slovakia and the number of unemployed people rose by 60,000 compared to 2009.

The EU’s SILC survey took place in April 2011 in the form of field surveys involving 403 surveyors who visited 5,200 Slovak households in more than 300 cities and villages. The survey stems from an EU directive, and is conducted in all 27 member countries, with Norway and Iceland also participating.

The at risk of poverty threshold in Slovakia increased by 3 percent or €10 per month between 2010 and 2011, according to the Slovak Statistics Office. The highest risk of poverty was recorded among the unemployed, with 42.6 percent affected, since economic activity has the strongest impact on the level of risk. Other groups at risk were households with 3 or more dependent children, at 32.6 percent; single parent households, at 26.4 percent, and children under the age of 18, at 21.2 percent, according to the Slovak Statistics Office.

How to fight poverty?

In terms of public policy, the most important tool in fighting poverty is the creation of an employment-friendly environment, which means improving the business environment, attracting foreign investors, reducing corruption and supporting law enforcement, Peter Goliáš, the director of the INEKO think-tank told The Slovak Spectator.

“Sadly, the business environment has been getting worse over the last few years, judging by various indicators like the recent hike in direct taxes and levies, and the move to make the Labour Code stricter,” said Goliáš.

He also suggested that the government should provide direct help to people at risk of poverty through requalification courses or training.

As for tools that might help fight poverty, Kusá listed better financing of employment programmes, more pressure to increase the minimum wage, and more generous family benefits and further support for income, things which, according to her, are “forbidden during the fight to cut the public finance deficit”.

However, she pointed out that a lack of jobs and low salaries are not the only things affecting people’s living conditions. Other factors are insufficient access to public and social services, such as pre-school education, leisure-time activities for children and subsidised housing. She noted that these can compensate for low income.

“However, these services are very limited here and there is no prospect that they will be supported more generously in the near future,” she concluded.

Jarmila Filadelfiová, an analyst with Institute for Public Affairs (IVO), another think tank, said she does not find the data on poverty risk surprising and suggested that the risk was especially prevalent in households with no wages or no second salary, the SITA newswire reported. According to Filadelfiová, low pensions resulting from long-term low pay are increasing these risks, especially for women.

Peter Goliáš agrees that the spread of poverty is related to rising unemployment, pointing out that since 2008, when unemployment in Slovakia sank to an historic low of 7.7 percent, the rate has risen to 13.2 percent in 2011.

The unemployment rate in Slovakia remained at 13.19 percent in August, according to statistical data issued by the Social Affairs and Family Centre (ÚPSVaR), part of the Labour Ministry.

“Considering the fact that unemployment has been a long-term societal problem in Slovakia it is shocking that no government has elaborated a serious analysis of its causes and therefore its possible solutions,” Goliáš said.

However, Goliáš said it was interesting that pensioners were among the groups least threatened by poverty, according to the survey, with their rate of risk of poverty falling for the fourth year in a row to 6.3 percent.

“Undoubtedly the most positive measure decreasing the risk of poverty of seniors is the regular valorisation of pensions, and the proposed valorisation by a fixed amount to improve the income of old-age pensioners with the lowest pensions,” said Kusá, adding that the government’s intention to adopt minimum pensions is also welcome.

Political scientist Ján Baránek of the Polis polling agency commented that the fact that 13 percent of the population lives on the verge of poverty will sooner or later affect the popularity of the ruling Smer party, SITA reported.

Referring to Slovakia’s obligation to push its public finance deficit under 3 percent of GDP, Baránek suggested that though government spending cuts will only start to affect the population after a certain period of time, rather than immediately after their adoption, people will nevertheless still feel them.

“Then we will have to assume that the popularity of Smer will start decreasing, which is logical,” said Baránek, as quoted by SITA, adding that people will not blame Brussels or Greece for the drop in their living standard, but the government.