THE GOVERNMENT will provide ten companies backed by foreign investors with state aid worth more than €121 million in the form of tax relief. Cabinet approval came after Economy Minister Tomáš Malatinský accepted a proposal from Finance Minister Peter Kažimír to postpone most of the aid to 2014 and beyond. The main argument for the move was the state’s need to focus on consolidation of the public finances and push the public finance deficit below 3 percent of GDP next year. 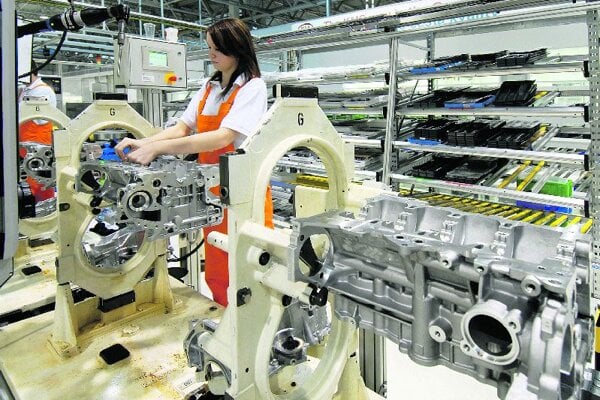 THE GOVERNMENT will provide ten companies backed by foreign investors with state aid worth more than €121 million in the form of tax relief. Cabinet approval came after Economy Minister Tomáš Malatinský accepted a proposal from Finance Minister Peter Kažimír to postpone most of the aid to 2014 and beyond. The main argument for the move was the state’s need to focus on consolidation of the public finances and push the public finance deficit below 3 percent of GDP next year.

“All disputes have been solved, therefore nothing should stand in the way of submitting the [state aid] proposal [to ministers],” Stanislav Jurikovič, spokesperson for the Economy Ministry, said, as quoted by the Pravda daily, after Malatinský and Kažimír met ahead of a cabinet session on October 10.

However, analysts have criticised the whole concept of investment incentives, saying that they merely grant advantages to a select few companies and deform the business environment. The government is trying to act like a businessman who decides which investments will go forward and which won’t, said Martin Vlachynský, analyst with the Institute of Economic and Social Studies (INESS) think tank.

“A better long-term alternative is to create good conditions for all economic subjects, i.e. a healthy business environment with low taxes, simple administration and effective justice system,” he told The Slovak Spectator.

In return for the money, the firms have promised to invest over €388 million and create more than 2,400 new jobs in total, the SITA newswire reported. The only exceptions are Mondi SCP and Samsung Electronics, which have agreed with the Economy Ministry to secure 766 and 760 jobs respectively for six years, but have not undertaken to create any new positions.

The Economy Ministry first submitted its proposal to the cabinet on September 19, but was forced to withdraw it twice after several ministers expressed doubts, especially over helping companies who had no plans to create new jobs.

The Economy Ministry also faced criticism for asking for the money at the same time that the government is trying to cut the budget deficit. This problem was partly solved by postponing most of the aid for more than a year.

The only company that will be able to access any of the current aid package in 2013 is Samsung Electronics. Even this benefit will be limited to tax relief of €980,000, compared to the original Economy Ministry proposal of €2.5 million. In the following year the tax relief will increase to €8.92 million, and in 2015 to €9.9 million, SITA wrote.

The conditions applied to the aid for Mondi SCP will also change. Ministers agreed that the paper mill will get tax relief of €6 million, but only in 2014.

Though the agreement to provide investment incentives is positive in terms of the latest tax prognoses, the government should consider not providing the companies with any stimuli at all, argues Tomáš Púchly, an analyst with the F. A. Hayek Foundation.

“The dangerous precedent is the fact that [companies are using] investment stimuli to secure [existing] jobs,” he told The Slovak Spectator.

He added that in the future other companies that have no intention of creating jobs will also be able to ask for state help. The state should therefore amend the current law “with the aim of specifically setting conditions for granting investment incentives,” Púchly said.

Vlachynský added that another problem is that the beneficiary companies will not pay back the money in the form of taxes. Instead, the cost will be met by other taxpayers, for example self-employed people or temporary employees. Moreover, he stressed that if a company is not able to pay for an investment from its own future revenues then it is not really a rational investment at all.

“No investment stimulus really creates jobs,” Vlachynský told The Slovak Spectator. “Slovakia has 400,000 jobless people who will not find a job thanks to the incentives, but only thanks to a healthy business environment in which people [are motivated] to develop their business activities.”