MORNING traffic jams can spoil any driver’s day. Snail-paced commutes and bumper-to-bumper gridlock often result in people arriving late to school, work or important meetings. Although several radio stations broadcast up-to-the-minute traffic information, drivers sometimes tune in after it is too late to turn back and choose a less congested route. Solving the problem of daily traffic jams is only one of the issues addressed by the European Union with the implementation of so-called intelligent transport systems (ITS). 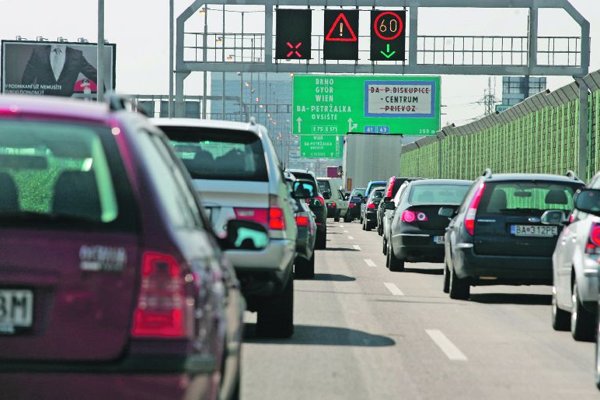 MORNING traffic jams can spoil any driver’s day. Snail-paced commutes and bumper-to-bumper gridlock often result in people arriving late to school, work or important meetings. Although several radio stations broadcast up-to-the-minute traffic information, drivers sometimes tune in after it is too late to turn back and choose a less congested route. Solving the problem of daily traffic jams is only one of the issues addressed by the European Union with the implementation of so-called intelligent transport systems (ITS).

“Innovation will help to make transport more sustainable, which means efficient, clean, safe and seamless,” reads the official website of the European Commission.

Yet, new infrastructure cannot solve all congestion- and emissions-related problems, the EC adds.

Although ITS are nothing new, the EU has prepared a unified legislative framework for its member states, which should be implemented by all countries. Slovakia passed its law on ITS on September 18, 2012, to be effective as of October 15.

The legislation sets the basic parameters for introducing specific projects within the ITS. Yet, the concrete measures and plans will be prepared by the Transport Ministry, department spokesperson Martin Kóňa, told The Slovak Spectator.

“ITS represents the usage of modern information technologies for monitoring, assessing and controlling traffic,” Kóňa said. He added that they also simplify the whole process of traffic operation and reduce the amount of time wasted. These advantages are also linked with the “effective usage of public funds” used on transport.

Moreover, ITS will also help to improve the safety and flow of traffic.

The whole ITS system is aimed at solving traffic problems comprehensively, Kóňa explained.

Ľubomír Palčák from the Transport Research Institute praised the advantages of ITS.

“The situation in transport is really critical, and we cannot improve it through a continual increase in the number of roads,” he told The Slovak Spectator.

He added that Slovakia has already launched several pilot projects and uses the technologies to monitor traffic and make it more efficient for drivers. One of the first of such systems was launched in Trnava.

ITS will use data and communication technologies, such as computers, electronics, satellites and sensors, to improve transportation. The main innovation of the system is “the integration of existing technologies to create new services” that will be used by both passengers and freight transport, reads the official website of the EC.

The implementation of ITS in Slovakia will start with the establishment of the National Traffic Information Centre (NDIC), which Palčák calls “the brain” of the whole system. The centre will collect, verify and process traffic data from a wide range of people and bodies, including the police, rescue services, the Slovak Hydro-Meteorological Institute (SHMÚ), customs offices, public-service broadcaster Radio and Television of Slovakia (RTVS), road operators and freight transporters. In addition to storing the information, it will also broadcast it to other drivers, according to the ITS law.

ITS will be implemented in several phases, but the ministry could not specify whether all of them will be realised. The ministry is currently preparing an analysis which will specify the concrete steps, Kóňa explained.

The projects within the ITS will be realised by several government ministries, in addition to the Transport Ministry. For example, the Interior Ministry will be responsible for introducing the eCall system, which “is the application which will secure an automatic or manual call from a vehicle in the event of an emergency, such as a car accident, to the united European emergency number 112,” reads the website of the ministry.

It will operate the coordination centres of the integrated rescue system which will receive calls from vehicles. Moreover, every passenger car and small truck will have to have equipment that will enable them to call the emergency service. The eCall application will be installed in all new vehicles and it will also be possible for drivers to have them installed in older cars, reads the website.

All member states must implement the system by the beginning of 2015.

Implementing ITS should cost Slovakia about €150 million. Yet, this is only a rough estimate of the total amount, Kóňa said, adding that it can be decreased through transparent public procurement of the projects. The implementation of the system will be funded not only from the state budget, but also from money allocated from EU structural funds for the years 2014-2020.

ITS on the European level

Although the ITS project in Slovakia is only in its infancy, similar concepts have existed around the world for years. The first nation to implement a system similar to ITS was Japan, whose Comprehensive Automobile Traffic Control System (CACS) implemented around 1970, was designed to control the traffic in Tokyo.

The first European country to monitor and control its traffic was Germany with its Autofahrer Leit und Informationsystem (ALI) project, which it launched in the 1970s. The system enabled authorities to obtain data about the vehicles on the roads and even communicate with them, according to Auto.sme.sk website.

At the moment there are several national ITS around Europe. Yet, the EU considers them “fragmented and uncoordinated” and “unable to provide geographical continuity of ITS services throughout the Union and at its external borders”, reads the Directive 2010/40/EU, passed by the European bodies in July 2010. Its aim was to accelerate the deployment of more innovative transport technologies and coordinate their implementation across Europe. The member states had the freedom to choose which systems they wanted to invest in, according to the official website of EC.

Before the directive the EC also passed an Action Plan, which suggested a number of targeted measures, including the proposal for passing the directive of implementation of ITS. Its goal was to create the momentum necessary to speed up market penetration of mature ITS applications and services in Europe, according to the official website of the EC.

The directive stipulates that the EC has to adopt the specifications of the functional, technical, organisational or services provisions of ITS by 2017 to address the compatibility, interoperability and continuity of ITS solutions across the EU. The first priorities should be traffic and travel information, the eCall emergency system and intelligent truck parking, reads the website.

The national traffic information centres should cooperate and exchange information about road accidents or alternate routes with one another, according to the agreement passed at the meeting of EU transport ministers held in Cyprus in July 2012. Such cooperation might make transport more efficient and reduce wait times of drivers stuck in traffic jams, not only in their own countries, but also abroad, according to the official press release of the Transport Ministry.

This means that Slovak NDIC will be able to exchange traffic data with other national systems, explained František Palko, the state secretary of the Transport Ministry.

Criticism of the project

During the parliamentary debate several opposition MPs voiced concern over certain aspects of the ITS project. The biggest criticism came from Alojz Hlina, an MP for Ordinary People and Independent Personalities (OĽaNO), who called the draft law too general. Moreover, he disagreed with installing special chips in cars within the eCall project, saying that it will pave the way for the introduction of electronic tolls for passenger cars, the SITA newswire reported.

Hlina even organised a protest which took place on September 18, one day before the MPs passed the bill. About 50 cars drove at very slow speed from Berg in Austria to the Transport Ministry located in the centre of Bratislava, SITA wrote.

“It is a lie that this law introduces a toll for passenger cars,” said Transport Minister Ján Počiatek, as quoted by SITA. He called such claims disinformation and denied the accusation that the law will force people to install chips in their vehicles.

The technological equipment in cars will be used for contacting rescuers, police and firefighters in the event of an accident, Počiatek added.

Palčák described the criticism as “a total misunderstanding of the matter”. He explained that although at the moment the EU is discussing the possibility of introducing electronic tolls for passenger cars and ways to charge fees, it has nothing to do with the law on ITS.

“We can discuss whether the law should be better [or] worse, whether some things should be there or shouldn’t be there, but basically the law is good,” Palčák added.