Košice through the lens

A PHOTOGRAPHY exhibition launched in Bratislava in late September looks at eastern Slovakia through the camera lenses of foreign diplomats and sees a region of untapped beauty and culture. 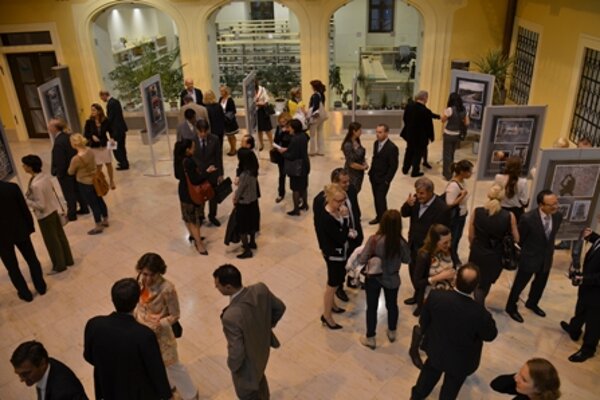 A PHOTOGRAPHY exhibition launched in Bratislava in late September looks at eastern Slovakia through the camera lenses of foreign diplomats and sees a region of untapped beauty and culture.

The exhibition, of photographs of Košice and the nearby Tokaj wine region taken by senior diplomats, was unveiled on September 27, at the University Library in Bratislava, under the auspices of the Slovak Foreign Ministry.

The project, called Košice Through the Eyes of Diplomats, casts Košice Region in a diverse light – showing images including a cello player in a church and a female railway worker – and sometimes in no light at all: two of the most unconventional photographs are of the silhouette of a city gate and an unlit wine cellar.

Kathy Bunka, Canada’s chargé d’affaires for Slovakia, some of whose photographs are included in the exhibition, told The Slovak Spectator that the aim of the programme, which was organised by the Croatian Embassy in cooperation with the mayor of Košice and the team behind Košice 2013 European Capital of Culture as part of the Terra Incognita project, was to promote eastern Slovakia.

“I think, as diplomats, we’re aware that tourists often hop off the bus from Vienna, spend three or four hours in Bratislava, and leave,” Bunka said. “It’s an incredible country. I was really happy to take part in the exhibition to encourage people to see more.”

The photographs were taken by a group of Bratislava-based heads of mission, known as the diplomatic club, during a visit to Slovakia’s second-largest city this summer. The club, the brainchild of Tuga Tarle, chargé d’affaires at the Croatian Embassy, was established a year and a half ago.

“Each month, one diplomat from a different embassy hosts a gathering or a cultural activity. For my turn, I decided to organise the trip to Košice to see the important places for 2013,” Tarle told The Slovak Spectator. “It’s good for each of us to create his or her own plan of how to interest the others, and motivate ourselves to find good issues and representatives. It’s a creative way of gathering together.”

Elena Mallicková, head of the public and cultural diplomacy department of the Foreign Affairs Ministry, expressed her support for the diplomatic club’s project.

“It is very nice to see genuine interest in our country, our habits, culture and traditions on the part of our foreign colleagues,” Mallicková told The Slovak Spectator. “We therefore very much appreciate efforts like this because they strengthen contacts with Slovakia.”

The exhibition, which is open to library card holders, is open until October 20 when, diplomats hope, the photographs will be displayed in another government building.

On October 13, ambassadors will attend the opening of another exhibition in Košice, which will display more of the diplomats’ photographs individually and, according to Bunka, “in a very different way”.