The exquisite cuisine of Japan

UPON hearing the word sushi, most Slovaks normally picture sashimi (actually small cuts of raw fish) or nigiri (raw fish or other ingredients served on or surrounded by small, individual portions of rice). However, sushi has many forms and varieties in terms of ingredients, colour, taste, texture and arrangement, Akira Takamatsu, Japan’s ambassador to Slovakia, explains as his chef Naoki Eguchi begins preparing chirashi sushi, which he says can be easily made by Slovaks in their own homes.

Related: Japanese cuisine I Soup I Main dish I Other cuisines 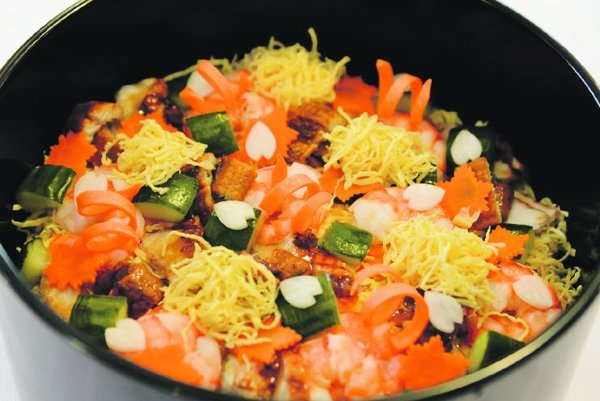 “Chirashi sushi is a very traditional Japanese meal that ordinary Japanese families cook at home and serve on various family occasions,” Takamatsu explains for the Cooking with Ambassadors programme prepared by The Slovak Spectator and TV Sme. He adds that for this meal Eguchi will be using ingredients that can be found in Slovakia, meaning that Slovaks can easily reproduce the taste of something that is rather closer to the everyday cuisine of his homeland than, for example, the nigiri which is commonly served in Japanese restaurants in Europe.

As with most types of sushi, vinegar-seasoned rice is the essence of the meal. Anyone watching Eguchi repeatedly wash the raw sushi rice and gently rub it between his palms, thereby separating the bran while not breaking the rice grains, can instantly appreciate that every step of the process carries significance. He explains that too many broken grains, for example, can impair the taste of the rice. Eguchi also explains that since the rice absorbs water quickly it is necessary to use filtered water for the first rinse, and to quickly drain off the waste water.

“The way we are preparing chirashi sushi [here today] is a compromise between eastern Japanese and western Japanese style,” Takamatsu explains, adding that he comes from Kyoto, in the western part of Japan, which is some way from the sea and hence has a more vegetable-oriented regional cuisine.

By contrast, his chef comes from Tokyo in eastern Japan, which is on the coast. Chirashi sushi in this part of the country tends to involve more seafood. The east-west dish prepared for the programme displays a balance of both fish and vegetable. Takamatsu, however, stresses that seafood still forms an important part of Japanese cuisine overall, resulting in a generally low-fat and healthy diet.

According to Takamatsu, when Japan opened up to the West around 150 years ago the process brought with it access to more fatty, oily foods, and that these are still enjoyed by many Japanese, especially young people.

“However, when people get closer to their 50s or 60s they tend to return to healthier food, namely to Japanese dishes, full of seafood or vegetables, since they want to remain fit,” said Takamatsu, explaining that this is also a result of the Japanese population’s ageing and the fact that older people want to contribute to society for longer.

The accompanying soup prepared by Eguchi is no less healthy, containing fresh vegetables and the unique, fishy flavour of katsuobushi, added to the stock in the form of shavings from a piece of dried bonito. Eguchi is quick to point out that powdered stock is available as a substitute, should dried bonito not be readily at hand.

When asked about the Japanese passion for sushi, Takamatsu admits that he personally does not know any Japanese who does not like chirashi sushi. As a diplomat, Takamatsu has tried a wide variety of national cuisines and is reluctant to pick a favourite but readily includes several traditional Slovak dishes on the list of foods he likes. However, he adds that these are more of an occasional treat, and that he is inclined to remain loyal to healthy Japanese food.

“Japanese people are very much conscious of being healthy,” Takamatsu said, adding that chirashi sushi, for example, does not include any significant sources of fat.

After the rice is steamed in a rice cooker Eguchi combines it with the vinegar mix, taking particular care to ensure that each grain is covered with the special elixir.

During the process of adding ingredients, such as the shiitake mushrooms, to the rice, then covering it with the shredded egg crepe garnish and topping this with the grilled eel, shrimps, cucumbers and carrots, he works deftly with chopsticks as if practising ikebana (the Japanese art of flower arranging), making sure that all the colours, shapes and textures create a coherent aesthetic whole.

“The colour arrangement … is really a very unique point for Japanese dishes,” highlights Takamatsu, adding that chirashi sushi in particular has a colourful appearance. “We do pay very careful attention to the appearance.”

The Japanese ambassador notes that Japanese people do not eat sushi every day, or even every week. When asked about the types of food that Japanese typically eat, Takamatsu explains that many enjoy a Western-style breakfast, a Western and Japanese-style mixed lunch and at dinner, which for many is the main dish of the day, a Japanese and Chinese-style or Indian-style mixed dinner.