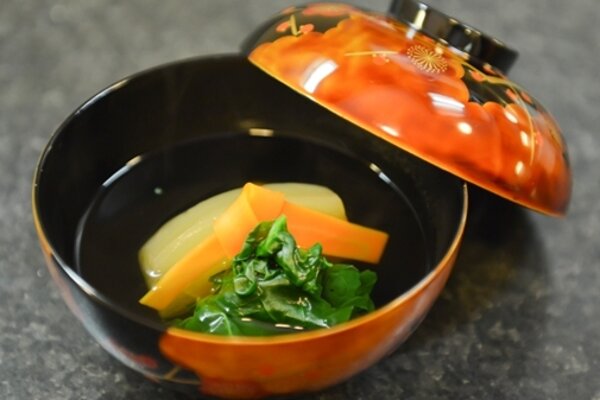 Preparation: Boil the instant hondashi stock in 2 litres of water and set aside. (For home-made hondashi, add 40g of kombu (edible kelp) to 2 litres of water and after 10 minutes of slow cooking, increase the heat until the kombu becomes soft. Just before the water begins boiling vigorously remove the kombu.) Add 0.5 litres of water and bring the broth to boil again. Add kezurigatsuo (bonito fish flakes) when boiling and then remove from the heat. Let the bonito flakes sink to the bottom for 1 minute, then strain the stock through a sieve or towel and discard the flakes. Put the turnip, peeled and cut into four similar-sized pieces, into a pot and cover with hondashi fish broth. Cook until tender then add mirin and soy sauce. Add parboiled spinach to the mixture of hondashi fish broth, mirin and soy sauce. Arrange the vegetables in bowls, then top up with fish broth and garnish with lemon peel.