In Open for Everything what does “everything” mean?

The Divadelná Nitra international festival opened with the dance performance Otvorení všetkému / Open for Everything, by Constanza Macras, an Argentine director based in Germany. Co-produced by the Goethe Institute and the festival itself, the piece made its Slovak debut on the evening of September 21 (and was shown again in Košice on September 23) and garnered a mixed reaction, but spurred a widely attended, intense discussion the following day. 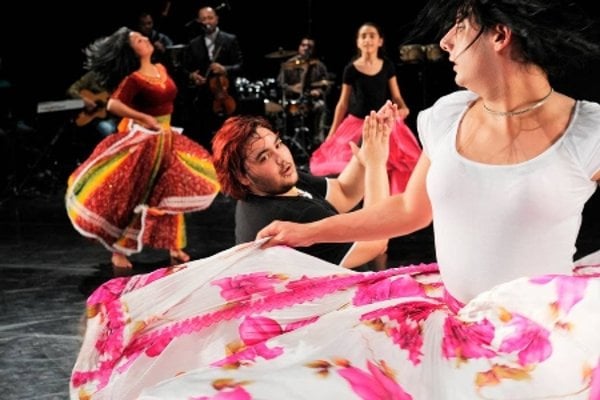 The Divadelná Nitra international festival opened with the dance performance Otvorení všetkému / Open for Everything, by Constanza Macras, an Argentine director based in Germany. Co-produced by the Goethe Institute and the festival itself, the piece made its Slovak debut on the evening of September 21 (and was shown again in Košice on September 23) and garnered a mixed reaction, but spurred a widely attended, intense discussion the following day.

In the show, which is part of a wider project, Macras combined actors of her DorkyPark ensemble from Berlin with Roma performers from Hungary, the Czech Republic and Romania (and one person from Slovakia, although working currently in Prague). After working on the piece for over a year and spending a lot of time preparing the mostly under-aged Roma, the director then choreographed and created a performance almost two hours long that, after premiering in Berlin, toured countries in central and eastern Europe.

Rather than a single narrative, the piece untwined the real life stories of several Roma, in a production interspersed with music, dance, photos and video-presentations. The piece also included two interludes by non-Roma. The show addressed the plight of contemporary young Roma and their struggle to find their identity – caught between rejection and contempt by non-Roma and the lack of new role models and prospects in their own environment. Some viewers left after the first several minutes, but Open for Everything received a standing ovation at the end. It probably depended on what one expected from the performance: those who were curious about “the Roma issue” and the stories, found the music and dance etudes to be too long; and those who yearned for authentic Roma music and dance found the stories confusing and off-putting.

But during the discussion with the performers the following day, during the “Breakfast with…” part of the festival, one of the actors, Markéta Richterová from the Czech Republic, explained that the audience’s reactions were different in Slovakia and in her homeland than in Germany or Austria, where some of the viewers realised that this was the first time they had ever seen a Roma, either onstage or out in the world. In countries where “ethnic issues” mean foreign immigrants, the perception of the public and their response was different – as were their expectations. The debate further evolved around whether Open for Everything was primarily a social project, or art, and which criteria to apply to it.

Iveta Millerová, also from the Czech Republic, explained why there was a single Slovak performer, Marek Balog of the Gitanes band from Prague, instead of several young Roma, as was the case in other countries: “I myself am not a professional musician, but rather a community worker, and I try to educate Roma kids through music and dance.” And she admitted that even for one of “her kids” who was selected by Macras for the project, it was very hard to be removed from her close-knit community and, for almost two years, be thrown into a completely different environment at such a sensitive age (most of the actors were in their teens). Millerová added that it must have been even more difficult for parents or teachers at the Slovak art school who were asked to recommend or send the young Roma; as they would be left in a completely unfamiliar environment, away from family or close friends.

Millerová also expressed her hope that the project would not end with the festival or with the performances, but that it would make a positive impact on the brave young people later in their lives. She concluded that although it definitely depended on the majority society and its acceptance (of the show and stories, but also of the performers), the main emphasis lied with the Roma themselves and with the lessons they could draw for them.

Even most of those who did not like the piece itself agreed that the discussion that followed was exhausting, inspiring and slightly disquieting, and that it raised ever more issues and questions. But this might be, apart from entertainment and enjoyment, the true purpose of art and culture.