“THERE will be a 0.0 percent hike,” was how Prime Minister Robert Fico responded to the price hike plans of Slovakia’s major gas distributor, giving Slovenský Plynárenský Priemysel (SPP) an ultimatum: minority shareholders of SPP should either refrain from pursuing higher gas prices for households or his cabinet would not approve the sale of their 49-percent stake in the utility as the state, which owns 51 percent of the company, has a pre-emptive right to buy the shares. 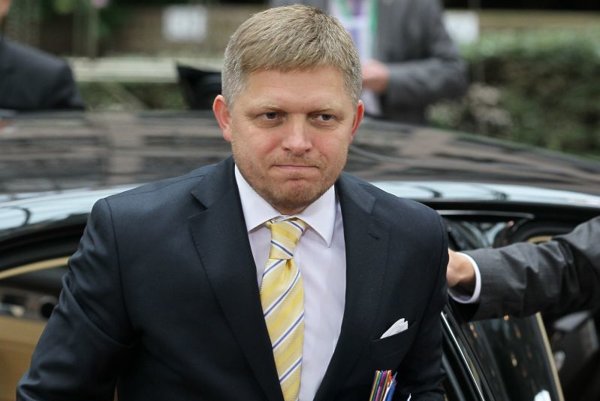 “THERE will be a 0.0 percent hike,” was how Prime Minister Robert Fico responded to the price hike plans of Slovakia’s major gas distributor, giving Slovenský Plynárenský Priemysel (SPP) an ultimatum: minority shareholders of SPP should either refrain from pursuing higher gas prices for households or his cabinet would not approve the sale of their 49-percent stake in the utility as the state, which owns 51 percent of the company, has a pre-emptive right to buy the shares.

“We will not be serving them,” Fico said on October 17 after he learned that France’s GDF Suez and Germany’s E.ON Ruhrgas had not withdrawn their price hike requests by 10:00 in the manner he had demanded a day earlier, when speaking to the media about their plan to hike prices by between 18 and 25 percent. “They are submitting amoral proposals, which have nothing to do with reality.”

SPP remained tight-lipped over Fico’s statements with company spokesman Peter Bednár saying that “in drawing up a proposal on regulated prices for next year, SPP is acting in line with the law”, as quoted by the TASR newswire.

As the minority shareholders refused to withdraw their price hike request from the meeting of the general assembly of SPP, the Slovak cabinet on October 17 did not discuss the sale of their 49-percent share to the Czech firm Energetický a Průmyslový Holding (EPH).

The minority shareholders of SPP approved the request for gas price hikes for 2013, ranging from 18.56 percent to 25.43 percent on September 29, at a meeting of the board of directors, where they hold four of the seven chairs. The meeting of the general assembly, where the state holds a majority and thus has the possibility to block the rises, is scheduled for October 29. The Office for Regulation of Network Industries (ÚRSO) would then have the final word over the hike, since it needs to consent to any price rises that affect regulated markets.

Yet Fico said that the general assembly should not be bothered with such proposals while calling the hike plan a ‘provocation’ and an effort by the German and French minority shareholders to strengthen their position, the SITA newswire reported.

The shareholders explained their stance in a letter, which Fico described as not containing what the cabinet had expected to find in it: “It contains seven legal tricks and the government has no positive relationship to or understanding of any of them”, according to TASR.

Economy Minister Tomáš Malatinský explained that in their letter the shareholders said they were willing to negotiate the price and then the general assembly would not discuss the board’s proposal but rather the deal reached through the negotiations with the representatives of the state, according to TASR.

Meanwhile, the Christian Democratic Movement (KDH) called Fico’s statements unnecessary and irresponsible, dubbing them “a cheap theatre for the voters” which might cost the state a lot, SITA reported.

The Christian Democrats argue that the price hike proposal will be the subject of discussion by the SPP general assembly where the state holds a majority through Smer nominees: “He [Fico] either does not trust his own nominees or he is not aware that he might only be scaring away new investors and thus prevent the creation of new jobs in Slovakia.”

The sale of shares

However, the developments also mean that GDF Suez and E.ON Ruhrgas do not yet have the approval of the Fico government to sell their 49-percent stake to EPH, which is controlled by Czech businessmen Daniel Křetínský and Petr Kellner, as well as Slovak investment group J&T.

The Economy Ministry does not recommend that the government exercise its pre-emptive right to acquire the SPP minority package, suggesting that it is “not an ideal solution” due to the “condition of public finances, efforts to strengthen control over the development of the deficit and reducing Slovakia’s indebtedness”, according to a document on the potential change of SPP ownership structure submitted to the cabinet.

The Finance Ministry is on the same page with Malatinský’s department over this issue, warning of a lack of financial resources and the potential negative impact on the public finances, SITA reported.

The government has several times declared that if it does not manage to buy the minority share it would shoot for negotiating a new shareholder deal, which would return to the state, as the majority shareholder, decision-making powers on the board of directors, where it is currently outvoted by the foreign investors’ appointees, according to SITA.

Fico also announced that there is another entity interested in an SPP share transaction, although only in relation to gas transit secured by SPP Eustream, according to the Sme daily.

SPP has been involved in a tug-of-war over gas prices with the state regulator before.

At the beginning of 2012, ÚRSO approved a maximum gas price hike for households of 5.53 percent but subsequently in February, the regulatory authority on its own initiative reduced prices by 5.24 percent due to the signing of an addendum to the long-term contract between SPP and Gazprom based on which the price was adjusted.

Earlier this year, SPP stated that it had made a financial loss of €200 million in the regulated sector of household gas due to decisions by the ÚRSO in setting prices for natural gas, the SITA newswire reported.

“The gas utility generated a cumulative loss of about €200 million in the regulated sector of households in 2008-2011,” Jean-Jacques Ciazynski, chairman of SPP’s Board of Directors, told SITA on February 13. “I have to stress that these losses have slashed and will continue to slash contributions by SPP to state coffers.”

ÚRSO, however, dismissed the claims with its head, Jozef Holjenčík, responding that the company has never documented the declared loss in the regulated household sector.

The gas utility said it was outraged about the ÚRSO decision at the end of last year to refuse to approve SPP's suggested 23-percent hike in gas prices and to set the price increase for households at an average of 5.53 percent from the beginning of this year.

Ciazynski stated that the regulator had calculated the increase based on a EUR/USD exchange rate and Brent oil price that did not correspond with reality.

Over the summer of 2012, SPP sought a 17-percent gas hike, but ÚRSO turned down the proposal.