‘DECENT’ is a word that the organisers of anti-Roma rallies have taken to using to describe recent protests against people they describe as ‘anti-social elements’ or ‘inadaptable citizens’. But Roma rights activists and human rights watchdogs complain that the rallies and their language are contributing significantly to growing tension between Slovakia’s Roma and non-Roma populations, especially in places where there are large, marginalised Roma communities. 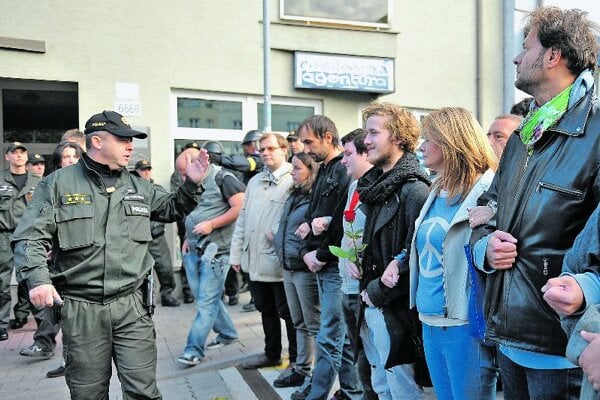 ‘DECENT’ is a word that the organisers of anti-Roma rallies have taken to using to describe recent protests against people they describe as ‘anti-social elements’ or ‘inadaptable citizens’. But Roma rights activists and human rights watchdogs complain that the rallies and their language are contributing significantly to growing tension between Slovakia’s Roma and non-Roma populations, especially in places where there are large, marginalised Roma communities.

Following a rally organised by the Say Stop to Anti-Socials in Your Town civic initiative in Partizánske, to campaign for what it called “the rights of decent people”, on September 29, a rally called ‘Together for a Decent and Safe Life’, organised by Oskar Dobrovodský, a resident of Malacky who has had widely reported problems with his Roma neighbours, took place in Bratislava on October 13.

People associated with Marián Kotleba’s extremist People’s Party – Our Slovakia joined both rallies. Moreover, Marián Mišún, who ran as a candidate for Kotleba’s party in the March 2012 parliamentary elections, was co-organiser of the Bratislava event. The rally was opposed by a group of about 40 people who objected to what they called its extremist nature, and formed a human chain in an attempt to stop the marchers, the SITA newswire reported.

“The marches for ‘decent people’, boosted by statements made by public officials, deepen the expressions of racial hate,” Rado Sloboda of AI told The Slovak Spectator. “Attention should be focused instead on implementing solutions as opposed to seeking reasons for the current state.”

According to AI, stress should be laid on pursuing Roma inclusion policies such as Slovakia’s strategy for the integration of the Roma, which is based on the revised action plan for the Decade of Integration of Roma population, Sloboda said.

The government should pursue concrete steps leading to changes in the area of education, which AI considers key to the respect for human rights, Sloboda added.

The organisers of the October 13 march, which began outside Bratislava's Main Railway Station under the close watch of both state and city police before heading towards Bratislava Castle, said their only goal was “to make sure decent people in Slovakia are protected”, arguing that politicians are supporting people they dubbed “anti-social individuals, thieves and criminal elements” at the expense of decent people, the TASR newswire reported.

On the same day, supporters of Kotleba’s People’s Party – Our Slovakia, who featured prominently in the march, as reported by TASR, commemorated the 125th birthday of Jozef Tiso, the Catholic priest who was president of the Nazi-allied Slovak wartime state responsible for deporting tens of thousands of Slovakia’s Jews to Nazi death camps, among other atrocities.

Several activists, including university educator Eduard Chmelár, journalist Michal Havran and Slovak MEP Monika Flašíková-Beňová (Smer), tried to block the march. Flašíková-Beňová stated: “It is absolutely unacceptable that in one country, especially after the European Union received the Nobel Peace Prize, fascists are marching through Bratislava,” SITA reported on October 13.

Dobrovodský and Mišún insisted they were not extremists. The case of Dobrovodský, who has been complaining about what he calls unhygienic conditions, noise and abusive behaviour on the part of his Roma neighbours, has received massive media coverage in Slovakia. On September 21, Dobrovodský requested that the municipality of Malacky provide him with substitute housing, SITA reported.

One day before the march, AI warned in an official statement that “despite the complicated situation that the Dobrovodský family and their neighbours face over the long term, the spreading of stereotypical statements by the media and politicians will contribute to deepening hate and heightened tension in society, while delaying constructive solutions to the problems in Slovakia”.

AI documents cases of social exclusion and discrimination against minorities and disadvantaged groups in numerous countries around the world, but in Europe such cases mostly, although not exclusively, affect the Roma minority, according to Sloboda. The issue of segregation of Roma children is live in Bosnia and Herzegovina and in Croatia; forced evictions of the Roma are a problem in Romania, Serbia, Italy, and also in France, while Hungary is experiencing attacks against the Roma.

“The tension within society is deepening due to social and economic inequality,” Sloboda said. “Yet stereotypical statements by the media and politicians, which are not in line with Slovakia’s obligations in the area of human rights flowing from international agreements, contribute to a deepening of hate and heightening of tension in society.”

AI warns that instead of supporting stereotypes, public officials should focus on solving the problem of segregation of Roma children in schools.

“It is the segregation in education which significantly limits the future of Roma children and their opportunities to find a place in the labour market,” said Sloboda. “AI views the solutions of the type ‘first duties and then rights’ that governmental officials bring as being of a repressive character, which are looking at the community through the prism of prejudices and generalisations that are not built on human rights principles.”

According to Sloboda, the way that politicians approach the situation reflects their preoccupation with votes and not their responsibility towards Slovakia’s obligations in the area of human rights. AI notes that each proposed measure should be based on respect and the protection of human rights.

Report: Extremist rallies on the rise

A recent report on combating extremism in Slovakia issued by the Interior Ministry, suggests that 2011 saw an increase in extremist demonstrations. Most of these protests – along with manifestations of hate-fuelled behaviour in general – were organised or spread via the internet, the report states.

“The organisers of demonstrations sought ‘unifying’ topics (i.e. ones appealing to supporters of both the left and right wings) such as ‘anti-gypsyism’, criticism of the social system, and cases in the media,” the document stated, as quoted by TASR.

The report also warned that Slovak extremists had moved on from anonymous action, through participation in civil associations, all the way to politics – and that to achieve their goals they have typically made use of problems affecting socially disadvantaged communities.

“When pointing to a certain problem, they [the organisers] intentionally take advantage of the frustrations of local people,” the report stated, referring to People’s Party – Our Slovakia, which was active throughout Slovakia last year, TASR wrote.