Court awards record compensation in case of boy in coma

THE HIGHEST compensation for a patient in Slovakia’s history has been awarded by a Slovak court to the family of Šimon Buch, who has remained in a coma for over five years after undergoing routine surgery of his nasal septum. The Regional Court in Nitra ruled on October 10 that Faculty Hospital in Nitra must pay nearly €600,000 to the Buch family for what the court defined as mistakes made during the surgery performed on September 4, 2007. Šimon, then aged 16, suffered a cardiac arrest when anaesthetist Ivan Kliment failed to adjust the procedure when complications arose during the surgery. He was sentenced to two years probation and banned from working as an anaesthetist for five years, SITA newswire reported. 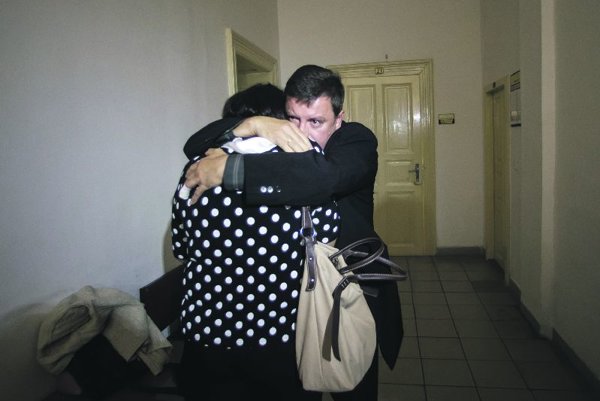 THE HIGHEST compensation for a patient in Slovakia’s history has been awarded by a Slovak court to the family of Šimon Buch, who has remained in a coma for over five years after undergoing routine surgery of his nasal septum. The Regional Court in Nitra ruled on October 10 that Faculty Hospital in Nitra must pay nearly €600,000 to the Buch family for what the court defined as mistakes made during the surgery performed on September 4, 2007. Šimon, then aged 16, suffered a cardiac arrest when anaesthetist Ivan Kliment failed to adjust the procedure when complications arose during the surgery. He was sentenced to two years probation and banned from working as an anaesthetist for five years, SITA newswire reported.

As a result of the operation, Šimon was left seriously disabled.

“The plaintiff does not perceive real life; he cannot move or communicate,” the Judge Eva Šišková of the Nitra District Court explained in her decision, as quoted by Sme daily, adding that all these factors affected the amount of compensation awarded.

The court awarded the family €17,942 as compensation for Šimon’s pain and suffering and €181,666 as compensation for being deprived of his ability to function in society, sums defined by a 2004 law. However, the court also approved additional compensation for what the judge called non-material damage: Šimon was approved €200,000 while his parents are to be paid €90,000 each; his brother and sister were awarded €10,000 each, according to Sme.

“The money will not bring Šimon back to us, however it is necessary to ensure the care [required for him to live],” Šimon’s mother Valéria Buchová told The Slovak Spectator, adding that she sees the court’s decision as a big improvement in the Slovak judiciary.

The hospital has 15 days to appeal the court’s verdict. Nevertheless even if the decision becomes effective the hospital will probably not have enough money to pay the compensation. Since Slovak law does not allow for the seizure of state-run hospital property, there is little chance that the Buch family will ever see the money, according to observers.

Ondrej Škodler, the legal advisor to the Slovak Medical Chamber (SLK), a professional organisation, opined that the reason why health-care providers may have problems with paying out compensation is that the sums awarded do not reflect the financial situation of the doctors and their ability to insure themselves against accusations of malpractice.

“The court’s verdict [on compensation] has no significance for the plaintiff or his family if it causes the bankruptcy of the health-care provider,” Škodler told The Slovak Spectator, adding that bankruptcy would cause the hospital to cease to operate, making it unable to pay the compensation. “Thus, an adequate sum [of compensation] should take into consideration the provider’s realistic ability to compensate the damage.”

Buchová said that if the hospital does not compensate them, her family will use all legal means available in Slovakia to get the money, and if that fails they are ready to take the hospital to the International Court of Justice in Hague.

The court decided that Kliment was guilty of causing bodily harm and sentenced him to two years probation and forbade him from working in anaesthesiology for five years.

It argued that he monitored Šimon’s state carelessly, and that the boy fell into a coma during the surgery when his heart stopped beating and the resultant lack of oxygen damaged his brain, Sme reported in May 2010. During the surgery doctors monitored Šimon manually since their monitoring device was broken. After the surgery hospital personnel took him to the recovery room instead of the anaesthesiology and resuscitation department (ARO), the SITA newswire reported.

The hospital has not so far issued an apology to the family. Furthermore, the doctor responsible for the mistakes later remained employed at the hospital, working in the emergency department. The hospital has not responded to inquiries about whether he still works there, Sme reported.

“The Faculty Hospital in Nitra has behaved coldly toward us since the beginning, they have never offered any help, no form of compensation, not even an apology to us,” Buchová said. “They are acting as if nothing happened.”

The hospital has stated to the media that they will not comment on the case.

Originally, Šimon’s parents demanded €330,000 for non-material damage compensation but the court granted them €200,000, arguing that the entire sum proposed was accounted for in other compensation they received. The judge approved the €90,000 which had been demanded by the parents, but declined to award their children the same sum, arguing that as younger people, Šimon’s siblings can continue to lead normal lives, unlike their parents.

The law on compensation for causing pain and suffering defines compensation on the basis of a points system. For instance, a broken collar bone requiring surgery plus five broken ribs are equal to 110 points, which is then multiplied by €15.72, amounting to almost €1,730 as the total sum for compensation. The law defines 11,520 as the highest possible rate, totalling around €181,000, according to the example as reported by Sme.

According to Škodler, however, the law places no limit on the amount of compensation for non-material damage.

It is the court’s obligation to explain what the sum granted is based on, Škodler said. “However, you can say that, in principle, the judge has no limits to the sum of non-material damage compensation he approves; it is only his opinion and his ability to explain his decision [that matters].”

Even though the points system of compensation provides a clear basis for determining amounts owed, the law has its disadvantages, since there is fixed number of points for pain and suffering compensation, as well as compensation for being deprived of the ability to function in society.
Therefore claimants tend to demand non-material damages as well. However, the provider is only able to insure itself against damage compensation, not for non-material compensation, Škodler stated.

The amount of damage compensation should reflect the ability of the health-care provider to insure itself against malpractice accusations, which is the only way to guarantee that the patient will receive his or her compensation without forcing the provider into financial ruin, taking into consideration the actual state of Slovak’s health-care system funding, Škodler said, adding that even doctors are humans capable of making mistakes.

“Therefore, if we want to have doctors we have to understand that even they have to have the option to execute their jobs without the risk of professional or economic liquidation,” said Škodler, explaining that most of the time he advocates for doctors in cases which the courts have difficulty deciding over whether or not mistakes were made, since many of the mistakes that are made cannot be clearly judged as bad, but rather as so called “unlucky decisions”.