ELECTRONIC health records, a national health portal, electronic prescription services and electronic appointment scheduling: electronic health care or simply eHealth promises all this and more. But Slovaks must wait several months before they can experience the new system and fully digest its advantages. After a bumpy start caused by changes in government, the Health Ministry and other involved organisations hope that the project is now on the fast track to implementation. 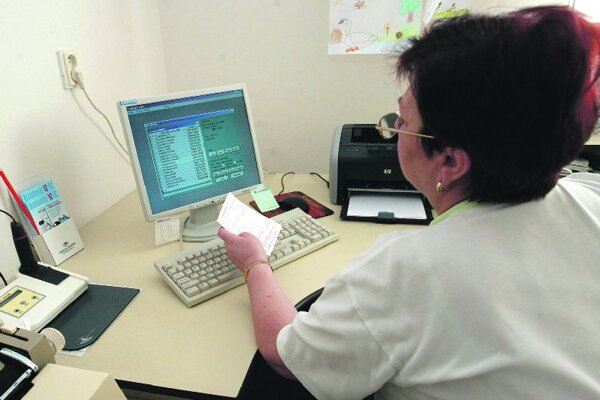 ELECTRONIC health records, a national health portal, electronic prescription services and electronic appointment scheduling: electronic health care or simply eHealth promises all this and more. But Slovaks must wait several months before they can experience the new system and fully digest its advantages. After a bumpy start caused by changes in government, the Health Ministry and other involved organisations hope that the project is now on the fast track to implementation.

The plan is to implement eHealth via several steps up to 2018. eHealth in Slovakia consists of three phases, each of which features one main and several supporting projects. Slovakia is currently in the first phase, whose main focus is the National Project of Electronic Health Services (eSO1), co-financed from structural funds of the European Union within the Operational Programme for Information Society (OPIS). Under this project, the national health portal, electronic health records, electronic prescriptions, and electronic appointment scheduling will be put into operation. It will also set the foundation for the integration of all information systems of health-care providers with the national eHealth solution. The project will therefore enable central provision of relevant public health information, electronic appointments mainly for laboratory treatments and vaccinations, electronic prescriptions and provision of patients’ health information in the form of an electronic medical record.

“The eSO1 project was launched in March 2010,” Peter Bubla from the National Health Information Centre (NCZI), which is reponsible for eHealth’s implementation, told The Slovak Spectator, adding that shortly after its launch the Finance Ministry halted it for nine months and it ran in a reduced regime for the following three months.

This delay also affected preparation of the second phase of eHealth. Originally projected to last between 2012 and 2013, it is now 18 months late. Projects on whose outcomes eHealth relies were postponed too. In this respect Bubla mentioned the central portal of public administration, or the project of the citizen’s electronic identification card. He added that NCZI and others involved are committed to enabling patients and health-care workers to use the benefits of the new system as soon as possible without endangering the quality of the project.

The eSO1 has finally undergone alpha testing. Moreover, a feasibility study of the National Health Information System (NZIS) project from the second phase has been approved and the national project is under preparation, said Bubla.

Bubla hopes that no further unexpected barriers to implementing eHealth will occur.

“But we have to deal with the conditions already mentioned – i.e. the delay of other eGovernment projects needed for eHealth and the gap in financing for the project from the state budget during the previous cabinet,” said Bubla, adding that they still face technical challenges with implementing the project and they will need to explain the benefits of eHealth to citizens and health-care workers.

The trial operation of electronic patient appointments, a national health portal and electronic prescriptions might begin in summer 2013. Physicians and patients should gradually be able to start using it in early autumn 2013, according to Bubla.

The major costs of the three phases of eHealth are covered by EU funds, which Bubla specified as amounting to approximately €130 million.

With regards to financial benefits, target benefits of eHealth after implementation of the second phase will be €100 million annually.

To implement eHealth Slovakia needs to amend its legislation. According to the Health Ministry, draft bills to the related legislation are currently being prepared.

Pros and cons of eHealth

The Health Ministry and NCZI are convinced that electronic health-care services can only bring about economic and health-related benefits for citizens, health-care workers, insurance companies, i.e. the whole health-care system. Among the health benefits, Bubla cited the reduction of negative drug interaction, faster diagnoses and fewer cases of inaccuracy and errors by medical workers. With regards to economic benefits he mentioned fewer redundant examinations, a reduction in prescription medication, less red tape, better allocation of funds at the level of health-care providers and improved data for the health policy of the state.

Milan Lopašovský, the vice-chairman of the Association for the Protection of Patients’ Rights (AOPP), noted that when implementing such a system the risk of abuse of the system’s information must be discussed.

“For example, it is not clear who is the owner of the information and to whom it can be provided,” Lopašovský told The Slovak Spectator. “This should always be with the agreement of the patient.”
According to Lopašovský, direct patient access to his or her data from the health insurer may be an advantage. An information website of the Health Ministry for patients about health-care facilities, medication and other topics may be beneficial, too.

The AOPP is not being informed about the implementation of eHealth in Slovakia, but it would like to participate in important decisions related to the future of eHealth.

The biggest health insurer, Všeobecná Zdravotná Poisťovňa (VšZP), which sits on the working eHealth commission overseen by NCZI, expects from eHealth faster diagnoses and treatment, the removal of duplicate work and more effective usage of funds.

“Exchange of information in real time between health-care providers or availability of important information about the health of a patient will also [improve the] quality of his or her treatment,” Dana Gašparíková, spokesperson of VšZP told The Slovak Spectator. “However, the electronic communication will require computers with access to the internet at each health-care provider. From our experience we know that not all health-care providers [are] inclined toward electronic communication as many of them prefer typewriters to computers when [reporting about the health care they have provided]. In a certain way this limits the usage of eHealth’s advantages.”