WHILE the current autumn has not been as hot as last year’s, the Health Ministry and medical workers are still sweating to reach agreement over wages. Hospital doctors are pushing for a third wave of rises in their pay, and nurses and midwives are looking for a way out of the impasse by which the law to increase their salaries has become bogged down at the Constitutional Court. All this is happening at the same time as the ongoing discussions over the 2013 state budget. 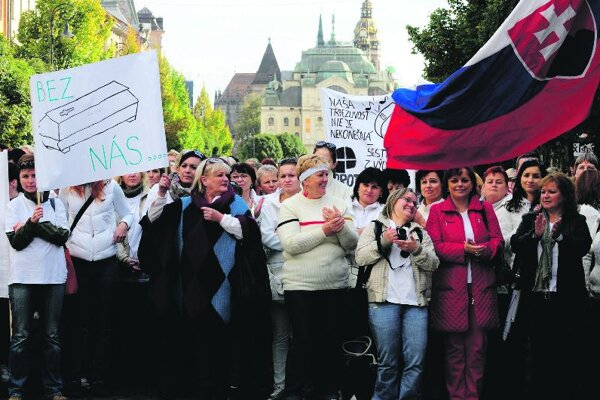 WHILE the current autumn has not been as hot as last year’s, the Health Ministry and medical workers are still sweating to reach agreement over wages. Hospital doctors are pushing for a third wave of rises in their pay, and nurses and midwives are looking for a way out of the impasse by which the law to increase their salaries has become bogged down at the Constitutional Court. All this is happening at the same time as the ongoing discussions over the 2013 state budget.

This time last year the two-month notice periods of hospital doctors who had resigned from their posts in protest against what they called the dismal condition of Slovakia’s health-care system were elapsing. Later, after hundreds of doctors did not come to work on December 1 and the following days, the situation escalated until an official state of alert was declared. Doctors returned to work only after the Health Ministry promised to increase their wages. But they were not the only medical workers fighting to get their pay increased. Nurses and other medical workers fought for, and won, a pay rise. But the Constitutional Court later suspended the law that would have implemented this – and nurses now face an indefinite wait until the court decides on its constitutionality.

“In the case of further increase [of wages] in the health sector it is necessary to take into consideration the economic situation, which is very serious,” Health Ministry spokesperson Zuzana Čižmáriková told The Slovak Spectator, adding that the state currently has no funds to pay for future increases.

Based on the draft state budget for 2013, the budget of the health sector is projected to be €4.06 billion. Compared with this year this represents an increase of €130 million, the SITA newswire reported on October 10. Economically active citizens will participate most in this increase, as compulsory health insurance premiums paid by this group of citizens will increase by €180 million in total. Such premiums cover €2.6 billion of the health budget.

Compulsory health insurance premiums paid by the state for children, pensioners, women on maternity leave and others will increase by €1.90 to €33.44 per month. The budget foresees the state’s contribution being almost €1.3 billion, up by €45.8 million. However, in terms of the share the state pays for the insured people it covers, this will decrease from the current 4.32 percent of the average wage to 4.25 percent.

Since last year’s industrial action, the wages of hospital doctors have been raised twice based on the revision to the law on health-care providers adopted by MPs via a fast-track proceeding in late 2011. As of January 1, 2012, doctors’ wages increased to 1.05-times the average wage in the Slovak economy in the case of junior doctors and to 1.6-times for fully-qualified doctors. Their wages also increased as of July 1, when they rose to 1.2- and 1.9-times the average wage, respectively. According to the settlement from last year, the wages of hospital doctors should increase to 1.25- and 2.3-time the average wage, respectively, as of January 1, 2013. However, this third rise is not set down in legislation.

In mid September Health Minister Zuzana Zvolenská met representatives of the Medical Trade Unions’ Association (LOZ), the main body behind last year’s protest, to tell them that the state does not have enough money to pay the third increase in doctors’ wages. Later, the ministry sent LOZ a proposal to postpone the third rise by spreading it over a longer period of time, but the exact details have not yet been revealed.

According to Čižmáriková, the minister plans another meeting with LOZ representatives to debate this proposal. This should take place on October 26.

The situation for nurses differs from that of doctors in that they are currently waiting for a ruling on the constitutionality of the law by which the previous government increased their salaries. The law, effective as of April 1, 2012, increased minimum salaries for nurses and midwives to between €640 and €928 per month, depending on experience. However, in several cases hospitals avoided fulfilling the law by changing nurses’ contracts, either to decrease their working hours or to change their duties. In response the cabinet earlier this year agreed to release an extra €50 million to fund the pay rises.

However, the Slovak Medical Chamber, which represents doctors, then challenged the constitutionality of the law increasing nurses’ pay, and the Constitutional Court in July suspended the act, pending a ruling on the case.

She added that there are several motions waiting to be resolved that were filed earlier than the one concerning the nurses, SITA wrote.

Čižmáriková said that in spite of the law’s suspension the ministry has kept the salaries of nurses and midwives in facilities it controls at the level set out in the law.

On October 17 the Slovak Chamber of Nurses and Midwives, expressing fears that it may take too long for the Constitutional Court to issue its verdict, asked Health Minister Zvolenská to prepare a new law that would set their wages in a similar way as the law on doctors’ salaries.

“We are not willing to wait until 2014 or 2016,” Mária Lévyová, the chamber’s president said, as quoted by SITA, adding that a wave of ill-will amongst nurses is growing.