ONE MAY not immediately associate Finland with tango, but this unique musical style has strong roots in this Nordic country. Slovaks were able to get a first taste of it on October 3, first in the small studio of the Slovak Radio building, and later at a milonga (a room or place for tango dancing) at the DanceArt Studio in the Vrakuňa borough of Bratislava. 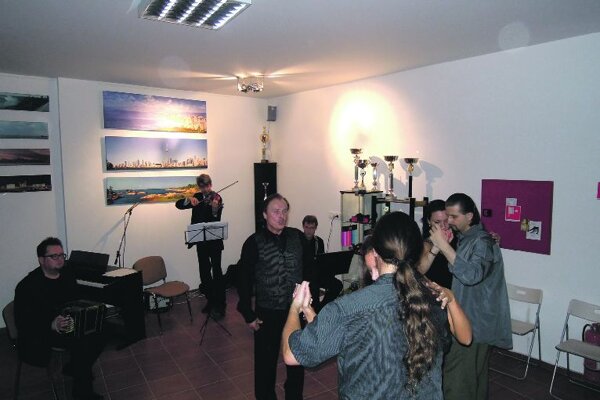 ONE MAY not immediately associate Finland with tango, but this unique musical style has strong roots in this Nordic country. Slovaks were able to get a first taste of it on October 3, first in the small studio of the Slovak Radio building, and later at a milonga (a room or place for tango dancing) at the DanceArt Studio in the Vrakuňa borough of Bratislava.

The Tango Sonorte ensemble set out on a European tour with solo singer Harri Kaitila to promote their recent album Un Finlandés en Buenos Aires, and the Bratislava programme included famous Argentine pieces – for example by Carlos Gardel and Astor Piazzolla – as well as some traditional Finnish ones (yes, there ARE traditional Finnish tangos, e.g. Liljankukka by Toivo Kärki and Kerttu Mustonen, and compositions by Toivo Kuula) and a newer instrumental piece, Bandoneon, by Antero Jakoila.

As Harri Kaitila translated most of the songs’ lyrics into English, it was possible to compare the Argentine songs to the Finnish ones. It seems that, at least as far as lyrical content, the latter songs are more melancholic and colder in feel, evoking images of the wintery snow-filled Finnish landscape. The BBC’s Mark Bosworth, who visited Finland’s famous tango festival in the town of Seinajoki, wrote that tango took the northern-European country by storm in the 1920s and 1930s, as exported from Buenos Aires, and Finns definitely made this music their own during the Second World War. He added that the lyrical themes of lost love and sorrow struck a chord with Finns, given the grim conditions of that time, and these sad songs, nearly always played in a minor key, have remained firmly planted in the national consciousness ever since.

Tango Sonorte – Mikko Helenius (badoneon and piano), Tuomo Dahlblom (guitar, replacing the renowned guitarist and composer Antero Jakoila due to health issues) and Mauri Saarikoski (violin) – also plays on its own, but for the “Finn in Buenos Aires” album, it joined forces with trained opera singer Kaitila, who has dedicated himself to tango for ten years. Kaitila’s voice might seem to have strayed in from a different genre, but thanks to strong instrumental support, it left an undeniably memorable impression. The event at the small Slovak Radio studio attracted a surprisingly large audience, and the dancers were also quite numerous, in spite of the late hour (the second performance, at milonga, started at around 21:00). The emotional, slightly nostalgic and intimate music was perfectly suited to the small spaces of both the studio and the dimly lit dance hall.
Spanish lyrics alternated with Finnish ones, and instrumental pieces were performed as well.

Although Finnish tango is not likely to become a big hit in Slovakia, it showed its potential to strike a chord with local audiences – and not only with the ever-growing community of local dancers of Argentine tango. Anyone willing to abandon expectations and clichés and discover something “new” (at least in Slovakia) could have enjoyed a warm October evening in the spirit of the 1940s, in the nostalgic ambience of the long-gone, intimate dancehalls that preceded rock venues and discos.