SLOVAK shoppers, already hit by some of the highest food prices in central Europe, are set to see the cost of food continue to rise into 2013, according to the latest data. 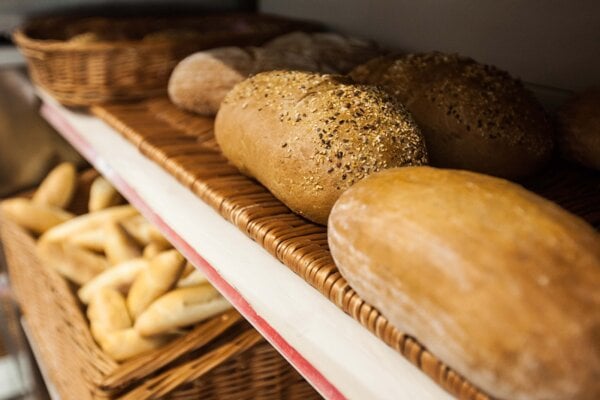 The price of bread may rise by up to ten cents by the end of the year. (Source: SITA )
Font size:A-|A+  Comments disabled

SLOVAK shoppers, already hit by some of the highest food prices in central Europe, are set to see the cost of food continue to rise into 2013, according to the latest data.

Experts expect further food price rises in Slovakia due to worldwide increases in the costs of commodities such as grain and oil, caused by volatile climate conditions. But, according to food producers, the Slovak food industry is not yet experiencing the effects of higher commodity prices and food retailers are putting up prices before they have to. Yet the retailers reject being behind the higher prices, suggesting that another factor might be the growing concentration of ownership in the food production sector. They also argue that it is the competitive environment of retailers that keeps inflation low.

Consumer prices of foodstuffs and soft drinks rose by 4.9 percent in July, in a yearly comparison, while the average annual harmonised inflation rate for the past 12 months reached 4 percent in September, according to Slovak Statistics Office. Inflation is measured using the Harmonised Index of Consumer Prices (HICP) which European Union countries use to compare inflation on an international basis.

The rate at which food prices are rising is expected to increase by the end of the year and there is a possibility that this trend will continue in the first half of 2013, said economic analysts, explaining that the main reasons are worldwide droughts, as well as petrol and oil becoming more expensive, Sme daily reported. However, despite the increase in food prices, the annual rate of inflation should remain the same or rise only minimally in the coming months, Ľubomír Koršňák, an analyst at UniCredit Bank Slovakia, told The Slovak Spectator.

“We should realise that prices of food are related to prices of agriculture commodities, whether it is price of vegetable food products or animal food products,” a spokesperson for Agriculture Ministry, Zuzana Gulová, told The Slovak Spectator, adding that consumers should see the results of increased commodity prices after some time, as the food market operates on a basis of long-term contracts.

Inflation measured using the HICP reached 3.8 percent year-on-year in September, the same level as in the previous month. In monthly terms, harmonised inflation was mainly influenced by increased prices in transport, by 0.07 percentage points, and education, by 0.06 percentage points, while food and non-alcoholic beverages increased by 0.03 percentage points.

The growth rate of consumer prices in Slovakia decreased by 0.1 percentage point in September compared to August. Over the first eight months of 2012, prices in Slovakia rose by 3.7 percent on average, the data of the Slovak Statistics Office show, as reported by the SITA newswire.

The so-called “green report”, the Agriculture Ministry report on the state of Slovak agriculture and the food environment, says that the prices of selected foodstuffs are the highest among the Visegrad group, a group of central Europe countries including Slovakia, Czech Republic, Poland, and Hungary.

However, it is not only world trends which are affecting Slovak food prices, according to the Food Chamber of Slovakia (PKS), the independent organisation of food producers in Slovakia which predicted the higher prices at the end of August. It claims that Slovak food producers have not contributed to higher food prices in shops, according to a PKS press release from October 9.

“After one month passed we can state that prices on shop counters truly got more expensive however producers did not cause it,” stated Daniel Poturnay, the PKS Director, in the press release. “We do not consider this behaviour as correct - neither toward food producers nor consumers.”

The increase in the price of groceries affects consumer behaviour, which consequently affects food producers, and the levels of production and employment in the whole sector, according to PKS.

“Since 2005, the number of employees in the food industry decreased by 20 percent, in agriculture even by 30 percent, but in shops just by a nominal 3 percent,” Poturnay said in the press release. “It is corrupting for the future of the Slovak economy if the department which creates the real values notes the significant decrease of the amount of employees while the second department which uses its products enjoys stable employment.”

In response to PKS implications that sellers raised their prices even before world markets affected them, the President of Association of Commerce and Tourism of the Slovak Republic (ZOCR), Pavol Konštiak, told The Slovak Spectator that it was food producers which put pressure on price levels in August.

Konštiak pointed out that the food production sector in Slovakia has a growing concentration of ownership, above the European Union average rate for the last ten years, which also affects prices significantly. In contrast, the competitive environment of retail trade in Slovakia keeps Slovak inflation on a fortunate level, according to him.

“It should be noted that no seller wants to raise prices. The market just copies the sales prices considering some time delay,” Konštiak said. For illustration, he added that food producers currently propose to raise the price of poultry by around 10 percent.

The Price Board of Agriculture Ministry, founded by the government this year, also focused on milk prices during its first meeting on September 28, noting the increasing difference between producer and retail prices. To analyse this problem the board wants to make a survey of economic indicators of the whole food market in Slovakia, according to Gulová.

The Agriculture Ministry is trying to change this situation and is organising meetings with various agents operating in the Slovak food market, since it wants to set convenient conditions for producers and sellers and secure the quality of their products, Gulová said.

Since climate conditions worldwide are not conducive to growing, various food commodities have become more expensive, for instance the profit from sales of sunflower and corn is below average while there is a continuous lack of feed grain, Pavol Scholtz, the President of the Exchange Chamber of Commodity Exchange Bratislava (KBB), explained, as quoted by the SITA newswire.

Since the beginning of the year, the price of wheat and soy has grown by 30 percent, while that of cocoa has risen by 20 percent, Sme reported.

“I suppose that it will affect bakery products mostly but also other food areas will get more expensive,” an analyst with the TERNO market research agency, Ľubomír Drahovský, said, as quoted by Sme, adding that the price of bread, which is currently 80 cents, may rise by up to ten cents by the end of the year.

Commodities for broiled and pig meat products should also continue rising until the next harvest at least, according to the prognosis of Feed Producers, Warehousemen and Commercial Companies Union (ZVKSOS). For farmers, this means higher pressure to increase their prices of pork by 10 percent and poultry by 27 percent.