'Principle of inclusion is needed'

IN SLOVAKIA too many children from marginalised communities are being wrongly classified and sent to special schools as a result. They later find they are unable to get out of this trap to return to the regular education system, and thus leave school very poorly prepared for life. These are the views of sociologist Oľga Gyárfášová, of the Institute for Public Affairs (IVO), a think tank. She suggests that the “principle of inclusion and civic approach should infuse every statement of every state official and each public policy. But we are not handling this mental turn yet”. 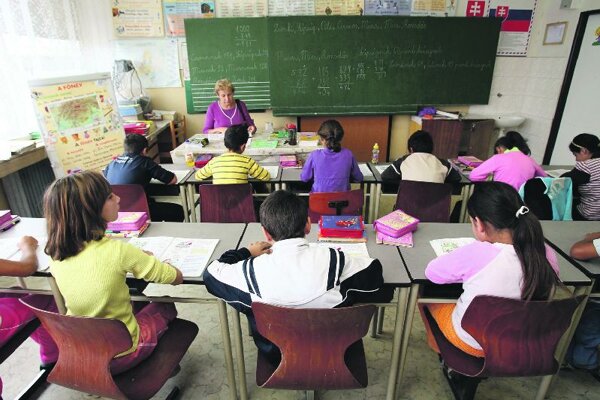 IN SLOVAKIA too many children from marginalised communities are being wrongly classified and sent to special schools as a result. They later find they are unable to get out of this trap to return to the regular education system, and thus leave school very poorly prepared for life. These are the views of sociologist Oľga Gyárfášová, of the Institute for Public Affairs (IVO), a think tank. She suggests that the “principle of inclusion and civic approach should infuse every statement of every state official and each public policy. But we are not handling this mental turn yet”.

Gyárfášová was commenting for The Slovak Spectator, in the form of an e-mail interview, on a recent study called Segregation vs Inclusion of Roma in Education, on the education-related proposals of the Roma Reform presented by the Interior Ministry and the Government Plenipotentiary for Roma Communities Peter Pollák, and what she sees as the major challenges in the education system from the perspective of Roma children. A research team consisting of independent consultant Jana Huttová, and Oľga Gyárfášová and Martina Sekulová, both from the Institute for Public Affairs (IVO), wrote the study, which was based on the results of qualitative research carried out between February and September 2012 as a part of an Open Society Foundation project.

The Slovak Spectator (TSS): What factors do you define as being the main problems of the education system from the point of view of Roma children, and what would be the best way for the state to address these problems?
Oľga Gyárfášová (OGY): The key problem is school segregation of children from marginalised Roma communities. This has several reasons: first of all it mirrors residential segregation, but it is strengthened by other factors as well, such as the educational policies of the schools’ founders, the creation of Roma schools by defining school districts, the phenomenon of “white flight”, and the lack of sufficient professional and financial capacity on the part of schools’ and their founders to balance the impacts of choice of school on segregation. At school level these [impacts] are the separation of Roma pupils to special classes as well as placing them in separate buildings. We have also observed the trend that schools rationalise segregation by claiming that it is actually better for Roma children, and by saying they and their parents want it, etc. In the proposed [Roma] reform most steps are going in the right direction, for example more children in pre-school care, longer time spent at school. However, the important thing will be how all this is implemented. The proposal will need a more detailed execution plan and of course the wide support of all the institutions involved.

TSS: Part of the government document on the Roma Reform focuses on schools or classes for children with special needs, claiming that the education acquired at these schools significantly reduces pupils’ chances of later finding jobs. What, in your opinion, is the most problematic aspect of the functioning of the special schools and how should the government modify the operation of these schools?
OGY: The special school is a ‘simple’ solution: to separate children, even those with minimal educational problems or special needs. Here too many children are being reclassified [and sent] to special schools; [children] who are later unable to get out of this trap and back into the regular education system and who leave school with a very weak preparation for life. It has been a very frequently declared goal to reduce the number of children in special schools and to reach for this solution only in justified cases. The figures show that in practice things work otherwise. According to the World Bank today as many as 12 percent of Roma pupils attend special schools, while in the previous generation it was 6 percent. This trend is completely wrong.

TSS: In your study the authors came up with a set of recommendations and possible solutions for the support of inclusive education. Could you list those that you consider the most important?
OGY: We formulated recommendations at three levels: at the level of schools, self-governments [i.e. municipal authorities] as founders of elementary schools and most pre-school institutions, and national policies. These are all fundamental and the most important thing is to have them applied simultaneously. Perhaps I will mention an interesting detail from the presentation of our study in Prešov, where one of the participants asked the rhetorical question: how do you want to erase segregation at schools when the state itself is segregational? It means that the principle of inclusion and civic approach instead of an ethnic one should infuse every statement of every state official and each public policy. But we are not handling this mental turn yet.

TSS: How do you see the proposal submitted by the government proxy for obligatory 3-year pre-school education for children from at-risk families, who would be identified according to criteria like the parents’ education, the crime rate, the long-term unemployment rate, the indebtedness of the family or a history of truancy?
OGY: On one hand our study also confirms that pre-schooling, optimally for three years (from 3 to 6), has long-term positive impacts on the education of children. We have not yet managed to increase the share of children from marginalised communities in kindergartens. On the other hand I do mind the wording of the reform because it is repressive and might have a discriminatory character, and far too much stands out as ‘social engineering’. I would be for the application of approaches which would motivate rather than dictate. There are good practices in Slovakia, for example at Lunik IX [a housing estate in Košice inhabited mostly by Roma] there is such interest in the local kindergarten that its capacity is not enough to meet local demand. Perhaps we should start by making kindergartens available for parents of children from marginalised communities, determined both by capacity and finances.

TSS: Which of the solutions proposed in the government programme do you consider positive and which, if any, of the solutions makes you concerned?
OGY: All the main points take the right direction but the question is how these will be carried out and for whom they are intended. It is a fact that the problem of segregation at schools – and I am not talking about the other problems of people from marginalised communities – are deepening. Many of the current critics of the reform were previously in the executive branch and didn’t do anything. It is easy to criticise. I agree, it is necessary to point to some of the sensitive “bottlenecks” in the reform, but it is necessary to give it a chance.