PROVIDING Slovakia with the number of university-educated people it needs is proving a challenging task. This is because of the high number of factors involved, including the amount of money that the state is willing or able to allocate to education, and the current and future needs of the labour market, and of society itself. Education Minister Dušan Čaplovič believes that some sort of regulation will help to produce the right number of graduates to satisfy the needs of the labour market and thus prevent large numbers emerging from universities with little or no prospect of finding jobs in their chosen fields of study. His opponents argue that instead of regulating student numbers, focusing on the quality of education being provided is more important. 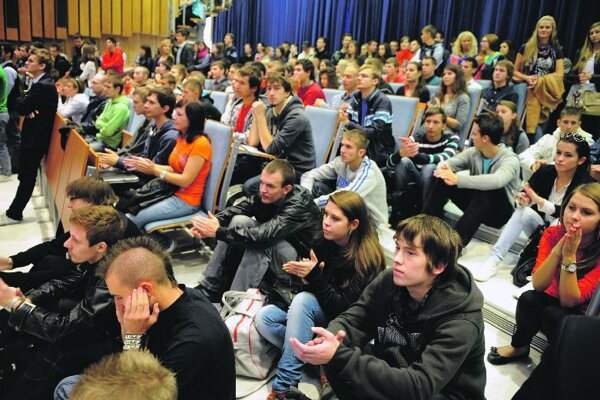 PROVIDING Slovakia with the number of university-educated people it needs is proving a challenging task. This is because of the high number of factors involved, including the amount of money that the state is willing or able to allocate to education, and the current and future needs of the labour market, and of society itself. Education Minister Dušan Čaplovič believes that some sort of regulation will help to produce the right number of graduates to satisfy the needs of the labour market and thus prevent large numbers emerging from universities with little or no prospect of finding jobs in their chosen fields of study. His opponents argue that instead of regulating student numbers, focusing on the quality of education being provided is more important.

The Education Ministry has drafted a revision to the law on universities that will enable it to curb the numbers of university students. The Slovak Parliament advanced the draft bill to its second reading on October 17. Since the Smer ruling party has a solid majority in parliament the change seems certain to be adopted and will become effective from the beginning of 2013.

The draft revision introduces the option for the Education Ministry to limit the number of new students admitted to university via the subsidies which universities receive to provide accredited study programmes. The ministry states in the draft bill that it will take into account the needs of the market when setting numbers. The limitation will apply only to public universities, as the ministry does not provide such subsidies to private universities. In order to prevent individual universities being affected the limits will apply to fields of studies, and thus to all universities that admit students to study on programmes in the field in question. Since the conditions for admission to bachelor’s study programmes are published by September 20 one year before students enrol, the ministry will publish its verdicts by August 31.

Minister Čaplovič, a nominee of the ruling Smer party, believes that the measure will reduce the number of unemployed university graduates and address the problem of market saturation in some fields. But critics of the plan have, among other things, attacked the flat regulation mechanism, which does not take into consideration the quality of the education provided by different schools, instead imposing cuts on all universities.

“The free education path and the freedom to choose are important,” Martin Fronc, a deputy for the opposition Christian Democratic Movement (KDH) and a former education minister, said during parliamentary discussion of the draft revision on October 17, as quoted by the TASR newswire. “Freedom is always connected with responsibility. I’m for free choice of study, but this is connected to responsibility for the consequences.”

According to Fronc, it is necessary to inform students that they may not find a job because there is already a surplus of experts in their chosen field.

Miroslav Beblavý, an MP for the opposition Slovak Democratic and Christian Union (SDKÚ), proposes that instead of planned flat cuts the number of students at the worst schools should be capped.
“The minister has chosen the way of making equal cuts to all,” said Beblavý, as quoted by TASR, adding that this means that a school which only just meets the accreditation criteria will be treated the same as the best school.

The Slovak Rectors’ Conference has not yet debated the proposal, while the Council of Universities, a government-sponsored advisory body basically considers it to be a reasonable step. Viktor Smieško, the council’s chairman, told The Slovak Spectator that regulating numbers indirectly via the subsidies paid to public universities was similar to methods used in other developed countries.

With regards to the disadvantages, Smieško warned that if regulation is performed by means of financial preference for chosen study programmes, there is a danger of extinction of “non-preferred” study programmes, including those which the state should maintain as part of the country’s ‘cultural heritage’.

According to Smieško, there are also other mechanisms to encourage students to apply for those study programmes, which will give them better chances of finding jobs. These might be financial motivation for schools as well as students attending such study programmes.

“I cannot imagine very well [the plan of the Education Ministry to regulate the number of students at universities] because I do not know how the ministry can know today how many people will be needed in specific fields in three or four years,” Králiková told The Slovak Spectator.

According to Králiková, instead of regulating the number of students, it is necessary to concentrate on enhancing the quality of education and its relevance in general, and then to support quality fields of study. She cited an example from Romania, where last year they introduced a ranking of study programmes which should allow differentiated financing of higher-quality fields of study.

She is also opposed to the idea of flat cuts, pointing to graduate employment statistics which the ministry published last autumn. These showed significant differences in graduate employment in the same field of studies and in the same region where the students have comparable job opportunities. For example, the jobless rate of chemistry graduates from Comenius University in Bratislava was 4 percent, while in case of graduates from the University of Ss Cyril and Methodius in Trnava it was 18 percent, pointed out Králiková.

Slovakia is part of the EU labour market and when somebody completes their education in Slovakia this does not automatically mean that he or she will work here.

“A nice example in this respect is medicine, where a lot of our graduates leave Slovakia to work abroad,” said Králiková. “[As a result] there is a lack of doctors in Slovakia and the question is whether the state should pay to produce a higher number of doctors.”

Králiková said that she does not think that the number of students at schools should just follow the labour market.

“Universities have been around much longer than any company,” said Králiková. “Thus they should not be only about the immediate needs of today but also about forming society. Is philosophy needed on the labour market? Maybe not, but from the viewpoint of the development of society this is an important field of study. Thus, the state should pay for it.”