THE 2012/2013 season of the Slovak Philharmonic (SF) opened, following the climax of the annual Bratislava Music Festival, with concerts on October 18 and 19. These were conducted by the SF’s principal conductor, Frenchman Emanuel Villaume, and focused on the French horn. 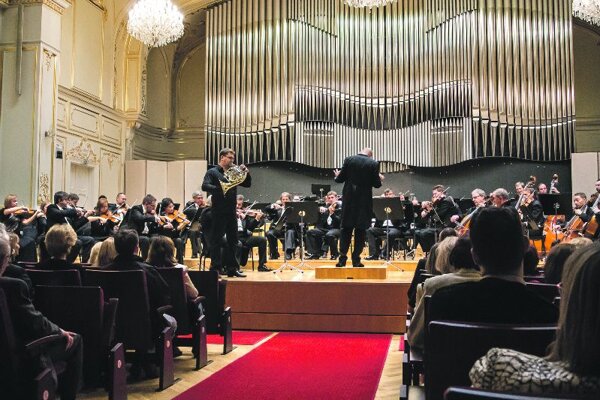 THE 2012/2013 season of the Slovak Philharmonic (SF) opened, following the climax of the annual Bratislava Music Festival, with concerts on October 18 and 19. These were conducted by the SF’s principal conductor, Frenchman Emanuel Villaume, and focused on the French horn.

The middle piece, played by soloist Viliam Vojčík, was the most musically demanding: Mozart’s Horn Concerto No. 3 in E-flat major. This was one of the pioneering works of its era, composed when the French horn was a simpler instrument but was more difficult to play and thus did not lend itself to solo presentation. Ivan Marton wrote in the bulletin for this concert that Mozart wrote most of his works for horn for a specific musician – his father’s friend Ignaz Leitgeb – and tried to use his professional qualities in each of the compositions. The concert started with Haydn’s Symphony No. 73 in D major “La Chasse” and ended with the famous Symphony No. 4 in A (“Italian”), Op. 90. Both these works also explore the horn’s full range, although as a part of an orchestra. The Haydn symphony bears traces of Mozart’s influence, Marton wrote.

In its new season, the SF will offer various cycles of music, from old pre-classical music to modern compositions, from chamber music, concerts in churches to grand symphonic concerts and a novelty: a cycle of organ recitals. The A/B cycle comprises symphonic-vocal works; the D/E cycle is called Music of Three Centuries; cycle C represents popular concerts; family concerts can be found under the R cycle; the HA cycle stands for the Music Academy of SF; junior concerts will be marked J; organ concerts O; the SKO cycle will be performed by the Slovak Chamber Orchestra of Bohdan Warchal; music in churches can be found under the S cycle; HM means Musical Mosaic; SH is old music; and NH new music.

Apart from Villaume, the SF has two permanent guest conductors, Leoš Svárovský and Rastislav Štúr. Germany’s Kai Bumann will also conduct the orchestra for the first time. Among guest soloists who will play during the 2012/2013 season is Slovak cellist and resident of Japan Ľudovít Kanta.

Within the New Music cycle, the season will commemorate, among other things, the 80th anniversary of the late Slovak composer Ilja Zeljenka. The cycle also brings the theatre piece Don Quichotte combined with music by Stanislav Palúch, Marcel Komendant and Jana Semerádová.

All concert details can be found (in English) at www.filharmonia.sk and tickets can be bought at the SF’s main venue, the Reduta building at Medená 3 / Eugen Suchoň Square 1.