Dutch cuisine: Cheese-eating traditionalists, but with a taste for the new

WHEN Daphne Bergsma talks about ‘Old Amsterdam’ she is not referring to the historic heart of her home town, the capital of the Netherlands.

Related: Dutch cuisine I Appetizer I Salad I Soup I Other cuisines 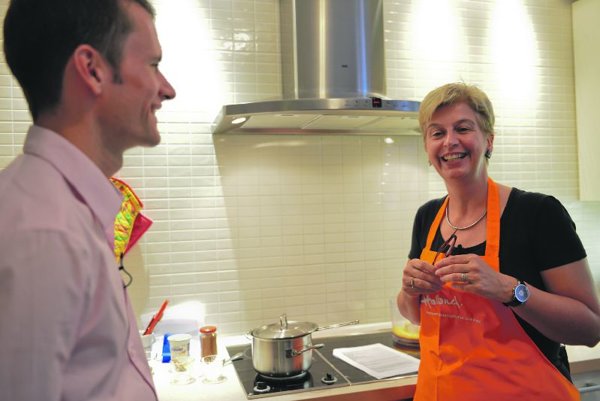 Instead, she is referring to a brand of that quintessentially Dutch food, cheese.

“Cheese is very Dutch; it is something that all of us eat,” says Bergsma, the Dutch Ambassador to Slovakia, as she takes a sharp kitchen knife and starts dicing a large piece of Old Amsterdam, a type of mature Gouda. “We eat it for breakfast; for lunch and then we can even have it for dinner.”

Bergsma, who is actually a professionally-trained chef who studied at the famous Culinary Institute of America, explains that cheese is just as much a symbol of the Netherlands as Amsterdam or tulips; indeed, the latter are among the first items that visitors notice when they enter her official residence in Bratislava.

The first dish she presents consists of small, edible cheese dice. But while this playful take on the humble cheese snack may look simple, the ambassador points out that it actually requiressomeskill to prepare.

Eva Kaňuščáková, who has been working for the Dutch embassy for more than 15 years, then demonstrates how to master the dice as she pushes small pieces of pumpernickel bread into the holes on the side of the cheese dice. Bergsma suggests that families can assign this task to children if they want to keep thementertained.

Bergsma, who is decked out in a bright orange apron representing Holland’s national colour, then offers the recipe for Old Amsterdam salad, which she says is simple enough for anyone to make easily at home – and even adapt and improve using any ingredients that cometo hand.

Bergsma notes that there are few major differences between Slovak and Dutch cuisine, one possible exception being the time of day at which people sit down to eat their main meal.

“In a way, our cuisines are similar since these belong among the less complicated ones in Europe,” says Bergsma, adding that historically Dutch food consisted of simpler dishes made for hardworking people who were working on the land and needed calories. “We have potatoes, which are popular in both of our countries, but one of the big differences I would say is when we eat and what: we do not have a hot lunch in the way that Slovaks prefer to eat it.”

The Dutch instead tend to have a sandwich, or breadand cheese, very often accompanied by a glass of milk, Bergsma says, pointing out that in the Netherlands milk is very much part of the daily diet for adults as well as children.

She explains that a typical dinner consists of potatoes, vegetables, and meat. Bergsma then demonstrates a third way to use cheese. Noting that Slovaks cannot imagine a proper meal without soup, she prepares Dutch cheese soup as the next item on the menu.

Bergsma explains that Dutch people are increasingly keen on international cuisine, especially food linked to their country’s colonial history, and says that her compatriots are quite outward-looking.

“We were always travelling the world; we have been importing spices since 1600, and that you can indeed see in Dutch cuisine,” she says, adding that this trend emerged most strongly after World War II, when the former colonies became independent and large groups of immigrants from countries such as Indonesia and Surinamecame to the Netherlands. “Their dishes became very popular and so today Indonesian cuisine is seen in the Netherlands as being Dutch food.”

According to Bergsma, many Dutch people like these cuisines precisely because they contrast with traditional Dutch cuisine, as the “tastes are much more complicated and refined”. People would not go to restaurants to have a traditional Dutch meal, she concludes, “this is what you have with your grandparents”.