THOUGH schools in Slovakia claim that they place some Roma children into separate classrooms as a way of providing more attention from teachers, human rights watchdogs call the practice segregation, claiming that it violates their right to the same education as their non-Roma peers. A recent ruling by the Prešov Regional Court, which has confirmed a historic verdict in a case concerning discrimination against Roma in the education system issued by a district court in January 2012, has nevertheless reinforced the opinion of human rights watchdogs. 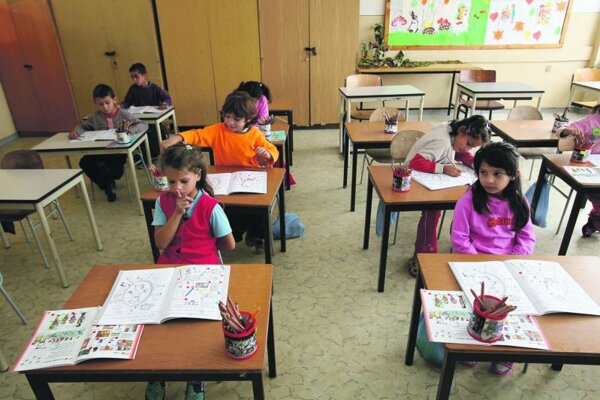 THOUGH schools in Slovakia claim that they place some Roma children into separate classrooms as a way of providing more attention from teachers, human rights watchdogs call the practice segregation, claiming that it violates their right to the same education as their non-Roma peers. A recent ruling by the Prešov Regional Court, which has confirmed a historic verdict in a case concerning discrimination against Roma in the education system issued by a district court in January 2012, has nevertheless reinforced the opinion of human rights watchdogs.

The court ruled that an elementary school in Šarišské Michaľany discriminated against students by creating separate classrooms for children located on separate floors. The court did not accept the explanation of the school that it did not separate children according to their ethnicity, but based on the fact that they came from a socially-disadvantaged environment. As of the next school year the school must place the children into mixed classes, the SITA newswire reported on October 31.

“This final decision of the court, regarding the current legislation, has basically brushed off the long-term model of segregated education of Roma children from socially-disadvantaged environments which has long been tolerated in Slovakia,” Vanda Durbáková, lawyer for the Center for Civil and Human Rights, which filed the lawsuit against Šarišské Michaľany, told The Slovak Spectator.

She added that the ruling does not pertain only to Roma children, but to all children in Slovakia regardless of their various individual learning needs. Durbáková also stressed that the ruling is a clear signal that “the development of inclusive education is not a choice for our society – it is an absolute necessity”.

The lawyer said that it is state institutions that are responsible for inclusive education at schools, and that no change will be possible without preparing a long-term plan for cooperation between schools, municipalities and various state institutions.

Amnesty International (AI) also praised the court’s ruling, saying that it became involved in the case when it prepared a statement that pointed to the fact that separating students based on their ethnicity is a violation of their right to protection against discrimination over the equal approach to education.

“AI welcomes the decision of the court, which is a signal to the Slovak education system and especially the Education Ministry and other competent bodies that separation of Roma children in segregated classes is a violation of the anti-discrimination law,” said Barbora Černušáková from AI in London, according to a press release.

Though it notes that the ruling deems segregation unacceptable, AI warns that similar cases are occurring in other places, where Roma children are being placed in separate classes or special schools. One example is an elementary school in Levoča which, after pressure from parents, separated first-grade Roma from non-Roma students. Although the school placed some children in mixed classes, the segregated classes still exist, AI stated in its press release.

Yet, Jaroslav Valaštiak, headmaster of the school in Šarišské Michaľany, was disappointed by the ruling.

“Six children from trouble-free families and 12 students from a socially disadvantaged environment: what has this to do with the education of the nation?” Valaštiak said, as quoted by the Sme daily, after the ruling.

He explained that the school would try to figure out how to apply the ruling, but said he was afraid of the consequences it might bring. While at the moment about two-thirds of the students come from a nearby Roma settlement in Ostrovany, the school may gradually come to be attended by only Roma children, the headmaster said, as quoted by SITA.

The mayor of Šarišské Michaľany, Vincent Leššo, openly criticised the ruling, stressing that the village does not have any classes for Roma students.

“Slovakia should pose itself a question, based on the verdict of the court, what the education level of our future children will be like under such conditions,” Leššo said, as quoted by SITA, adding that nobody has asked the Education Ministry, the state school inspector or the regional education authority for a statement.

Moreover, there was no teacher from the elementary school present during the proceeding, except for the headmaster, Leššo stressed.

The school in question required its Roma students to attend special classes located on a separate floor of the school, beginning in the 2008/09 school year, according to the Center for Civil and Human Rights, which filed the lawsuit in 2010.

The district court in Prešov issued the ruling in favour of the centre at the beginning of 2012. The verdict was welcomed by several human rights watchdogs, as well as then government proxy for Roma communities, Miroslav Pollák, , who called the practice applied by the primary school in Šarišské Michaľany inappropriate.

The Office of the Government Plenipotentiary for Roma Communities (ÚSVRK) explained that there is a difference between natural segregation, which occurs in places where only Roma children are born, and artificial segregation, where teachers separate children mainly because of their social and ethnic status.

“Though the primary school in Šarišské Michaľany opened classes for children from a socially vulnerable environment, which should balance the deficits in the education level of children, pupils in such classes did not even start to attend normal classes,” the ÚSVRK stated in its official comment on the ruling, published in January 2012, adding that the school even sent Roma children in normal classes to segregated ones.

“I consider the ruling to be an important precedent in the area of establishing zero tolerance for discrimination at schools,” Ingrid Kosová of the non-governmental organisation Quo Vadis told The Slovak Spectator earlier this year.

Martina Mazurová from AI Slovakia praised the fact that the verdict included a definition of segregation, something which could in fact help in efforts to monitor it.

“Despite the fact that the Education Act bans discrimination and segregation in education, it does not define what segregation is,” Mazurová told The Slovak Spectator earlier this year.

She added that the government should adopt desegregation plans for schools and impose a duty to carry them out. She also said the state should encourage local governments to create action plans aimed at desegregation.