WE ARE entering a new, digital age where new technologies are not only rapidly reshaping our economies, but also quickly changing our way of life, and these aspects should be taken into consideration when devising political measures to boost the economy and create jobs, Jake Slegers, the executive director of the American Chamber of Commerce in Slovakia (AmCham) said when addressing the challenges of shaping labour legislation. 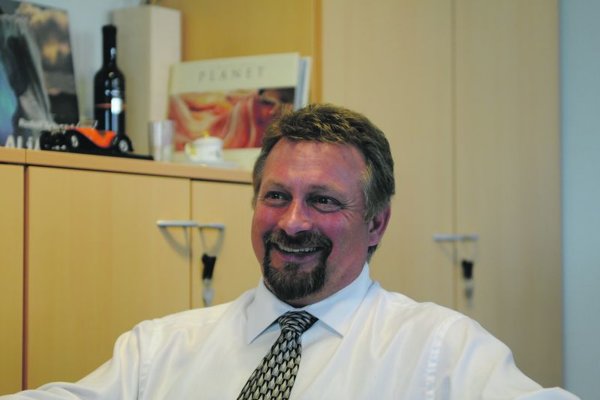 WE ARE entering a new, digital age where new technologies are not only rapidly reshaping our economies, but also quickly changing our way of life, and these aspects should be taken into consideration when devising political measures to boost the economy and create jobs, Jake Slegers, the executive director of the American Chamber of Commerce in Slovakia (AmCham) said when addressing the challenges of shaping labour legislation.

The Slovak Spectator spoke to Slegers about the challenges of the education sector, competitiveness, procurement legislation and AmCham’s plans for 2013.

The Slovak Spectator (TSS): Why has AmCham chosen education as one of its key areas of interest in 2012? What are the major challenges that Slovakia’s education sector faces currently? What are the areas that in your opinion the government needs to address promptly?
Jake Slegers (JS): The AmCham 2012 Year of Education initiative is a culmination of expert discussions that have been taking place over the last two years. At the end of last year, AmCham presented its FDI Strategy, which envisions Slovakia as a premium destination for foreign direct investment. One of the recommendations introduced as part of the strategy is to invest in education. As AmCham has a very active and successful Committee on Business-Academic Cooperation, we decided to create a broader initiative which would translate this recommendation into specific solutions. Thanks to the interest and enthusiasm of our member companies, we were able to come up with 70 specific solutions that were presented at our “Future of Education Conference” on October 30, 2012. During the year, members of the initiative identified some of the key challenges of the education system, such as the quality of education, bureaucracy, rewarding quality teachers, evaluation and dissemination of quality research, the profile of the graduates, the content that is being taught and the methods for how it is taught, the efficiency of the school management, the lack of business-academic cooperation and the need to respond to labour market needs. These are some of the areas that we believe the Slovak government could and should address without having to dramatically increase funding for the amount that is already in the system.

TSS: How can AmCham members contribute to facing these challenges within the education sector?
JS: In addition to identifying the problems, we also came up with specific examples of how AmCham and our member companies can help. For instance, AmCham will be happy to provide foreign experts who would be able to help with the evaluation of primary and secondary schools and universities and school ratings. We would also like to continue with connecting universities with businesses, for instance in the implementation of professional training and internships for university students and academics. AmCham can also provide expert advice in the process of developing audits of graduate profiles in order to identify key competences, which should be considered when designing the education curricula. We are also ready to help in the process of setting up optimal solutions in university management, establishment of science and research parks, sharing of best practices and more.

TSS: Slovakia achieved its worst-ever ranking in the World Economic Forum’s (WEF) Global Competitiveness Report since its original inclusion in 1997, dropping from 69th to 71st place out of the 144 countries reviewed. The country has become the third-least competitive country in the European Union. What is your response to this ranking and how, in your opinion, could Slovakia improve its standing?
JS: Rankings are important indicators of competitiveness; investors do look at them for quick information about the countries which they are considering for future investments. Therefore, the deterioration in Slovakia’s ranking is certainly not very good news. However, it should also be noted that the ranking is not the only criterion that investors consider, and the assessments they make before entering new markets are much more complex. Therefore, I don’t expect that the worsening of Slovakia’s ranking alone would detrimentally influence potential investment in Slovakia. That being said, it is important to evaluate some of the challenges for Slovakia’s competitiveness and try to eliminate them. These include law enforcement and the efficiency of the judicial system, red tape issues and administrative burdens, but also the education system and the system of levies and taxes – for instance levies imposed on small and medium enterprises, which have to pay higher levies for their employees.

TSS: The government of Robert Fico is changing the Labour Code with foreign chambers of commerce expressing concerns regarding some of the planned provisions. Which planned provisions were reasons for concern and how could the potential changes impact US investors? What, in your opinion, are desirable changes to the Labour Code?
JS: First and foremost, we believe that Slovakia needs stable and predictable labour market legislation. Political and economic stability is a magnet for foreign investors. We are convinced that changes that are happening too frequently discourage prospective investors.
Maintaining long-term stability of labour market legislation, so that both employers and employees can rely on it, is crucial because otherwise there is no time to analyse the reactions of the labour market to the changes, and companies do not have enough time to adjust to the new rules.

We have to analyse the new revision of the Labour Code in the context of other measures taken by the government such as the revised Act on Social Insurance, which increases the levies, which employers have to pay for their employees, or the government’s Consolidation Package. We are concerned that altogether these measures could have a negative impact on Slovakia’s competitiveness in the region. After all, the combination of a qualified yet relatively inexpensive labour force together with the tax system and Slovakia’s membership in the eurozone have long been considered the primary advantages of Slovakia by potential investors. If these advantages no longer exist, it will be much more difficult for Slovakia to succeed in the fight for investments, but it will also make it more difficult for the small and medium enterprises to remain successful on the market. Importantly, this will also affect those companies which are already here in Slovakia, and have their shared service centres. Many people don’t realise that if these types of companies want to open more job positions here in Slovakia, they have to compete with other shared service centres even within their own company. These companies may then reconsider their plans to open new positions here and open them in a different country, for instance in Poland or the Czech Republic.

Having said that, I would also like to state that we appreciated the fact that the Ministry of Labour, Social Affairs and Family did hold discussions with us on the changes they proposed. During those discussions, we voiced our concerns about some specific provisions having to do, for instance, with the balance between the position of employers and trade unions, the flexibility of working time, the length of fixed term contracts or the concurrence of salary and severance payment in notice period. We wanted to emphasise that profound changes are taking place in our economic systems: we are entering a new, digital age where new technologies are not only rapidly reshaping our economies, but also quickly changing our way of life. This should be taken into consideration when devising political measures to boost the economy and create jobs. The guiding principle that directs any action should therefore be to protect the worker, not to protect the job.

TSS: What were the key challenges for AmCham this year and where do you see the chamber making a significant contribution in 2013?
JS: This year was marked by the change of the government, which also influenced our policy and advocacy activities. The new government has almost immediately started introducing new proposals and changes. Fortunately, we have been able to start an open and productive dialogue with the new government, in all of the areas mentioned above, as we are one of the largest chambers in Slovakia, representing more than 300 American, Slovak and international companies, which create about 20 percent of Slovak GDP and employ more than 100,000 people. We want to continue with our policy and advocacy activities next year as well, and we would like to focus on regional development. Not only would we like to become more active in the regions of Banská Bystrica or Žilina, but we would also like to acknowledge the importance of our Košice office, which will celebrate its 10th anniversary of establishment and the fact that Košice will be the European Capital of Culture in 2013.