Slovakia gets taste of US

WHILE US CULTURE can be considered an omnipresent phenomenon of the modern world, there are some elements that remain relatively unexplored in this country. The cultural office of the US Embassy in Slovakia seeks to bring these elements to a wider Slovak audience. From classical music to hip hop, photography exhibitions to film festivals, theatrical productions to poetry readings, the embassy actively imports, supports and introduces artists from a wide cross-section of American culture. 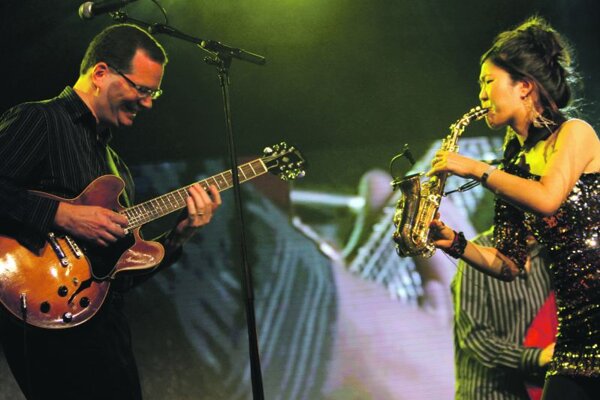 WHILE US CULTURE can be considered an omnipresent phenomenon of the modern world, there are some elements that remain relatively unexplored in this country. The cultural office of the US Embassy in Slovakia seeks to bring these elements to a wider Slovak audience. From classical music to hip hop, photography exhibitions to film festivals, theatrical productions to poetry readings, the embassy actively imports, supports and introduces artists from a wide cross-section of American culture.

The US Embassy has focused on classical music, starting with the Chanticleer vocal ensemble’s concert in the Slovak National Theatre in Bratislava in January this year. At the well-established classical music-oriented Bratislava Music Festival (BHS), which took place at the end of September this year, the opening concert featured US violinist Sarah Chang, thanks to US Embassy support. Other American artists featured at the BHS included renowned violinists Eugene Ugorski and Joshua Bell (the latter of whom had already played at last year’s BHS). The embassy also promoted performances by opera singer Lawrence Brownlee, Young People’s Symphony Orchestra and organ player David di Fiore, who played at this summer’s Organ Festival in Bardejov.

In Slovakia, jazz has proven to be an especially popular American import. American jazz artists who performed in Slovakia this year include the Marcus Strickland Quartet, Poogie Bell Band, a joint performance by Jess Klein with Slovak band Korben Dallas, Chris Byars Quartet and the US Air Force Dixieland ensemble Wings of Dixie. More recently, saxophonist/singer Grace Kelly and singer Dianne Reeves performed at the Bratislava Jazz Days festival at the end of October.

While rock music can be considered a universal language, its roots in North American culture are undeniably deep. Within the ongoing Rock v múzeu / Rock in the Museum series in Bratislava’s Museum of Trade, the US Embassy has presented several American bands and musicians, including Iron Butterfly, Blindside Blues Band, Michael Angelo Batio, Stevie Salas and Bernard Fowler featuring the IMF, Cedric Burnside Project and Mike Zito. The Outbreak 8 Hip Hop Festival – 2012 World Finals took place outside the US for the first time this year, making its European debut in Banská Bystrica in July.

The US Embassy has also been active in promoting the music of Slovak minorities, like the Rómsky hlások / Romano hangóro (Roma Voice) festival in Lučenec, which presents young musical Roma talents, and the 1st edition of the Mazal Tov festival of Jewish culture in Košice.

Košice, the eastern-Slovak city that will become a European Capital of Culture in 2013, is already organising a host of events, and many of them have been promoted and supported by the US Embassy, including readings and literary clubs, movie screenings and interactive English lessons.

Art exhibitions are also a big attraction, and apart from featuring US artists, like the current photo-exhibition of Lewis Wickes Hines in the Bratislava City Gallery, the embassy co-organised the Amazing Planet collection by Slovak photographer Filip Kulišev, which captures the natural beauty of US parks and natural reserves, and which has travelled through several cities around Slovakia.

Moreover, the embassy participated in the exhibition Understanding Photography - 10 years of cooperation between AFAD, TMU, NEDCC, Getty Center and the Embassy of the United States of America, as well as the 16th year of the Summer Photo-School in Liptovský Mikuláš, which featured a lecture by photographer Robert Muffoletto. The embassy also had a hand in presenting the work of Koloman Sokol at the Mirbach Palace of the Bratislava City Gallery this year. Sokol was a painter who bridged both countries, having been born and raised in Slovakia before moving to the US later in life.

The embassy supports numerous cultural festivals, like the Fjúžn (Fusion) festival in Bratislava (focused on minorities and their culture and social life), the 4 živly (4 Elements) festival in Banská Štiavnica, the Kremnické Gagy festival of humour in Kremnica, the Hory a Mesto (Mountains and City) festival of outdoor films, and the Visegrad Film Forum, which focuses on movies from the Visegrad Four countries.

Upcoming events include the staging of Pulitzer Prize laureate David Mamet’s play November, performed in Slovak (but with English subtitles), in the Bratislava Divadlo Aréna theatre.
One can learn more about the whole spectrum of the embassy’s activities at www.usembassy.sk/arc/calendar.