Slovakia responds to US election results

PRESIDENTIAL elections in the United States are one of those rare occasions when the media in Slovakia invites a wide range of Slovak politicians and pundits to comment on the choice the American people are making about their future leader and how this choice might affect Slovak-American relations. While Slovaks differed in their preferences for the best candidate to take the White House, they agreed that no major change was expected in relations between the United States and Slovakia in the event of victory by either candidate. 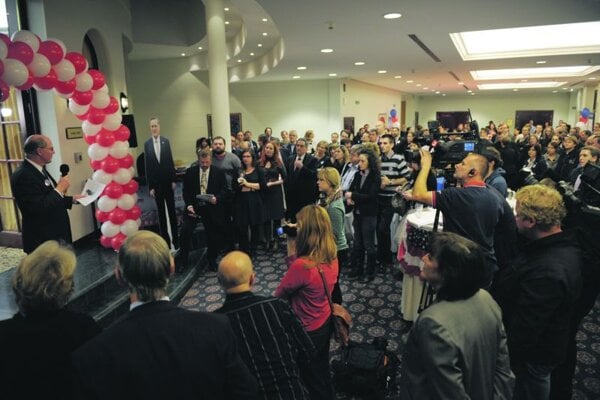 PRESIDENTIAL elections in the United States are one of those rare occasions when the media in Slovakia invites a wide range of Slovak politicians and pundits to comment on the choice the American people are making about their future leader and how this choice might affect Slovak-American relations. While Slovaks differed in their preferences for the best candidate to take the White House, they agreed that no major change was expected in relations between the United States and Slovakia in the event of victory by either candidate.

This opinion was confirmed by the United States Ambassador Theodore Sedgwick, who said even before the elections that, regardless of the outcome, the relationship between the two nations would remain “vibrant and strong”.

“With President Obama’s re-election, I have no doubt that our excellent cooperation will continue and deepen further,” Sedgwick told The Slovak Spectator in response to the re-election of Barack Obama. Obama beat his Republican challenger, Mitt Romney, in the election held on November 6.
Prime Minister Robert Fico, echoing his pre-election comments, said “it is the choice of the American voters, and each country selects its own president”. He added that he fully respects the results.

“American voters decided to back President Barack Obama, who is certainly closer to my party in terms of policies than his rival,” said Fico, as quoted by the TASR newswire.

Slovak President Ivan Gašparovič commented that Americans had elected a president who planned to improve all relationships, both domestic and foreign, adding that “under Obama communication between the United States and the European Union improved”, according to the SITA newswire.

Slovak Foreign Minister Miroslav Lajčák called the re-election of Obama “good news”, and gave three reasons for his opinion. First, he said, Obama’s style of foreign policy is viewed positively in Slovakia and Europe, and in his policies he preferred the search for compromise over one-sided measures or attempts to push partners into action, TASR reported.

Second, Lajčák noted that Obama’s team already exists, so it will not have to spend months gaining experience in office. Third, he said that relations between the USA and Slovakia are at such a good level that it does not in fact matter who is in the White House.

“The re-election might result in the intensification of the Euro-Atlantic dialogue, economic and security cooperation as well as cooperation overall,” Figeľ said, as quoted by SITA.

Over the past period, according to Figeľ, a turn away from Europe was an expression of poorly communicated world problems and US priorities: “Europe however remains the [USA’s] closest partner, ally and friend”.

Former Slovak ambassador to the United States Martin Bútora said that President Obama’s re-election will allow better evaluation of his policies in the future, commenting that in politics it is good if “every alternative gets its time”.

Bútora said that it will now be possible to assess more effectively the results of Obama’s policies, including a larger role for the state, more government intervention and efforts to tax the rich, SITA reported.

Another former ambassador to the United States, Rastislav Káčer, agreed that the re-election of Obama will not bring any dramatic change to bilateral relations, while adding that it was not a big surprise.

“However, if I were an American voter, I personally would have inclined to Romney for his larger economic programme,” Káčer said, as quoted by SITA.

Káčer said he also believes that Romney would have made more effort to assure Europeans about the relationship between the allies, since some are growing concerned about the United States turning away from Europe.

“From the point of view of Slovakia, however, nothing changes,” Káčer concluded, adding that Obama is a readable president for Slovakia, SITA wrote.

The US ambassador's point of view

When asked to interpret the election results, Ambassador Sedgwick said that while the president won re-election with a relatively comfortable margin in the US Electoral College, his victory in the popular vote was narrower than in 2008.

“As with any president, one of the key challenges he will face is to serve as the leader not only of those who voted for him, but of those who didn’t,” Sedgwick told The Slovak Spectator. “While the economic situation in the United States is looking much better now than when the president took office, he faces a number of key challenges that he will have to overcome with the cooperation of a congress that has a Republican House of Representatives.”

Even though President Obama was re-elected, it is very likely that there will be changes to his foreign affairs team, as is usual for most presidential administrations in their second term, Sedgwick said, adding that he is confident “that central Europe will remain an important and trusted partner of the United States”.

When asked about the significance for Sedgwick personally of Obama’s re-election, the ambassador replied that as a political appointee he was chosen by President Obama to be the ambassador of the United States.

“If Governor Romney had been elected, I would have resigned my position before his inauguration date to allow him to select a new ambassador,” Sedgwick said. “With President Obama’s re-election, I will be allowed the opportunity to remain here at least a little longer, for which I am grateful.”