A PRIVATE licensing institute in Slovakia has been accused of offering to authorise a potentially toxic hip replacement for sale in Europe as part of an undercover operation carried out by a British newspaper. Journalists from the Daily Telegraph posing as importers approached the Electrotechnical Research and Projecting Company (EVPÚ) in Nová Dubnica, which said it was prepared to license the dangerous medical implants for sale in the European Union, the newspaper reported. But the EVPÚ, backed by its supervising body, insists that the British journalists manipulated the evidence. 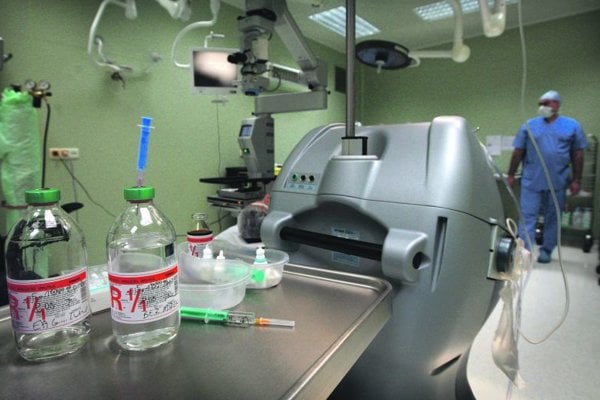 A PRIVATE licensing institute in Slovakia has been accused of offering to authorise a potentially toxic hip replacement for sale in Europe as part of an undercover operation carried out by a British newspaper. Journalists from the Daily Telegraph posing as importers approached the Electrotechnical Research and Projecting Company (EVPÚ) in Nová Dubnica, which said it was prepared to license the dangerous medical implants for sale in the European Union, the newspaper reported. But the EVPÚ, backed by its supervising body, insists that the British journalists manipulated the evidence.

The investigation, revealed on October 22, involved several European countries over ten months and was conducted with the assistance of the British Medical Journal, one of the world’s top medical science journals. When approaching the EVPÚ, the undercover journalists created a brochure about an artificial lumbar joint. The implant was in fact based on the ASR XL Acetabular System, produced by French company DePuy. This implant had to be recalled after it emerged that it could wear down when in use and release potentially toxic metal deposits into patients’ blood. During the whole process the EVPÚ did not note any faults with the proposed implant that might harm patients’ health and promised the reporters that it would obtain a certificate, according to the Daily Telegraph.

“Yesterday, it was revealed that British patients’ health is being put at risk because some European regulators, known as notified bodies, were prepared to license potentially dangerous medical implants,” the Daily Telegraph wrote on October 23.

The EVPÚ is one of several private companies that have the task of assessing, on behalf of the Slovak government, whether electrical products are safe to be sold throughout the European Union. Under European rules, the firm is also authorised to license medical implants such as artificial hips and knees.

The director of the institute has since rejected the reports and stated that its actions did endanger patients since the licensing process was not finished. He stated that a video of discussions held between EVPÚ staff and the fictitious company’s representatives, secretly made by the journalists, had been edited to portray the company in a bad light, the Sme daily reported.

“The certification process is too complicated a procedure to run in so naive and amateurish a way as the British journalists tried to interpret to their readers,” the EVPÚ’s chairman, Igor Gerek, said as quoted by the TASR newswire.

The Slovak Office of Standards, Meteorology and Testing (ÚNMS), which oversees the EVPÚ, carried out an inspection focusing on the institute’s hip implant licensing process on October 29. The office later stated that the licensing institute had sufficient personal and technical capacities to do its job and after seeing the procedures believed that the institute had reviewed the product correctly.
“It has to be stated that to this day the notified person [EVPÚ] has not released any document which [certifies that] the product complies with the legislative requirements,” ÚNMS director’s assistant, Daniela Lengyelová, told The Slovak Spectator in a press release.

Even though the EVPÚ is supposed to approve or reject products and is explicitly prohibited from acting as a consultant, “it appeared willing” to give advice on how to make certifications more successful and “its fee depended on passing the implant”, the Daily Telegraph wrote. The institute therefore has a high success rate, with only four applications failing over the course of five years, Ľubica Škrovanová of the EVPÚ reportedly told the journalists.

“We just cross the line and say just do this and it will be OK,” said EVPÚ marketing department representative Peter Lüley in a video in which he is not visible but his voice can be heard. “Therefore we have so high rate of successful certification [sic].”

After signing a contract and paying 50 percent up front out of a total approval fee of €2,750, the EVPÚ sent their comments. These asked the fictitious company to supply some further sections of the licensing application dossier, but the pages detailing the “product” features and “principle features of the device” were described as “OK”. The EVPÚ also asked that documents relating to the manufacturing process be submitted before the licence was issued. “But these were not related to design specifications,” according to Daily Telegraph.

“It is not possible to state whether the product is safe or not solely upon the fact that a ‘similar’ product put on the market was dangerous,” the ÚNMS stated in a press release. “The important fact is that only the producer is responsible for the safety of the product [which is] put on the market, not the notified person [licensing body].”

What is more, the EVPÚ said it could not compare the fictitious product with the French one as it is not allowed to search the European database of dangerous medical aids.

On the other hand, even if the hip replacement could be dangerous, the EVPÚ had to deal with it since “the certification body has to allow access to its services to all who demand it,” Gerek said, as quoted by Sme. He also rejected the British journalists’ claim that the institute has low criteria for approving products and only demanded a search of medical literature, since those criteria are set by the norms and directives of the European Union, not by the certification body itself.

“We regard those Daily Telegraph journalists’ activities with mixed feelings since we cannot deduce exactly what is the meaning of their story,” the ÚNMS said, adding that it fully supports journalists in cases where bodies commit unlawful activities.

“However, in principle we do not agree with tendentiously presented information which evokes the feeling that in ‘post-communist countries’ notified bodies are able to certify medical aids without examination of the technical documentation and without manufacturing checks,” the ÚNMS stated.

The subject of implant licensing has attracted particular attention in recent months after tens of thousands of women were found to be at risk from potentially faulty breast implants made by a French firm, PIP. After being told that the approval system was terminally flawed, the Daily Telegraph decided to expose the flaws by running an undercover operation. Over ten months, reporters travelled to Slovakia, Hungary, the Czech Republic, Greece, Turkey and South Korea.

“More than 70 private regulators [in Europe] compete for business, leaving the system susceptible to corrupt practices, such as those uncovered during the PIP breast implant scandal earlier this year,” the Daily Telegraph wrote.

The Testing and Certification Institute (ITC), the Czech regulator authorised to license products for medical use, was also prepared to consider licensing the potentially dangerous product despite a similar one being withdrawn in the United Kingdom, Australia and some other countries, the Daily Telegraph reported.

Tomas Závišek, a representative of the ITC, told reporters, while being secretly recorded, that his company would not put “obstacles” in the way of approving the device and boasted it was “on the side of the manufacturer and their products, not on the side of the patients”, according to the Daily Telegraph.

Like the EVPÚ, the ITC also later rejected the journalists’ claims and said that the video had been edited and had a “discriminatory nature”, according to the ITC’s website.