THERE is no great secret behind Canadians’ passion for rich creamy soups and maple syrup: it lies in their country’s climate.

Related: Canadian cuisine I Appetizer I Soup I Main dish I Dessert I Other cuisines 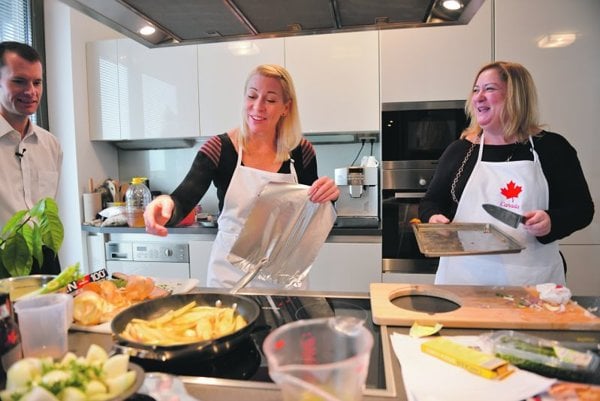 “It is pretty typical of Canada to have rich vegetable soups in the cold winter months,” Kathy Bunka, Canada’s chargé d’affaires, says while cutting a large onion into pieces and placing it, along with garlic, in a roasting pan. Since there are fairly cold winters in Slovakia too, Bunka, who is preparing just such a soup on a late October afternoon in Bratislava, hopes that her traditional Canadian recipe will appeal to Slovaks.

Though Bunka is cooking in a Slovak kitchen – which she explains is half the size of a typical Canadian kitchen – the scarlet maple leaf emblazoned on her white apron and that of her friend Isabelle Savard, Canada’s chargé d’affaires in Madrid, hints at one of the mainstays of Canadian cuisine.

“It’s not a gimmick; we actually eat maple syrup, we use it in baking all the time and we pour it on our pancakes,” says Bunka, holding a bottle of maple syrup which she will later add to the pork with mushroom, apple sauce and mustard that she is preparing. “There is nothing that Canadian kids like better than to wake up on Saturday morning and have their mother make them blueberry pancakes just smothered in maple syrup.”

There’s a lot of maple syrup being imported into Slovakia now, since “you have fairly cold winters too and it is a nice treat”, Bunka says as Savard adds some to the filling for a maple syrup pie.
Bunka and Savard, who was in Bratislava at the time of the Cooking with Ambassadors event, explain the dishes they chose for Slovak readers have been made by Canadians for decades and are traditional in both the French and English-speaking parts of Canada.

When asked about the similarities between Canadian and Slovak cuisine, Bunka explains that many Canadians come from this part of the world, not least because Canada accepted tens of thousands of immigrants in 1968 from Czechoslovakia, and there are very significant communities from Russia and Ukraine. Her own family originally emigrated from Ukraine.

“We have those traditional dishes and we eat pirohy – basically potato and cheese in a pasta shell – and there are various Slovak dishes which resemble that,” said Bunka, adding that nevertheless the country’s cuisine has changed over the years. “There’s been the multicultural influence in Canada, so we talk a lot about Asian fusion. So we’ll have a traditional dish but with Asian touches on it, and the cuisine has also become healthier over the years.”

According to Bunka, it would be very rare to have a Canadian dish without fresh vegetables or fruits – a trend which is only now evolving in Slovakia. As meals are still meat and pasta-based adding some fresh fruit and vegetables is good for the body and mind, Bunka says.

A very significant proportion of Canada’s population was not born there, contributing to the multiculturalism for which Canada is famous, said Bunka as she explained the origins of its multi-ethnic cuisine.

“It’s not only going into Toronto City Hall and being able to get served in 110 languages, but when you get onto public transportation and in most cities in Canada it feels like a mini United Nations, there are people from all over the world,” Bunka said adding that this contributed to a mixed cuisine even in the small town where she grew up.

“We grew up with that; we grew up eating foods from all over the world, so nothing is really that new to us any more,” Bunka said. “We’re open to all different cultures.”

Turning to her experience with Slovak cuisine, Bunka recalls with particular fondness what she describes as “a delicious goose feast with delicious goose served with red cabbage and lokše, matched with the most exquisite Slovak pinot noir”, adding that the meal was “unforgettable”.