SMART phones are useful devices right out of the box, but with applications, or apps, there are myriad ways to make them even smarter and more helpful. Apps exist in abundance, and new apps arrive on the market every day. They navigate smart phone users, help them conduct their businesses and provide entertainment. It is quite difficult to find anything for which an application has not yet been developed. 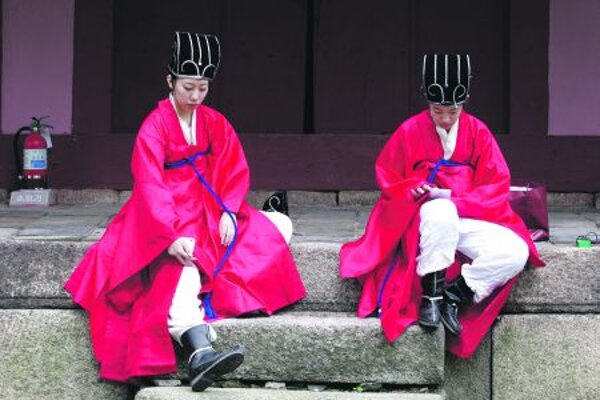 SMART phones are useful devices right out of the box, but with applications, or apps, there are myriad ways to make them even smarter and more helpful. Apps exist in abundance, and new apps arrive on the market every day. They navigate smart phone users, help them conduct their businesses and provide entertainment. It is quite difficult to find anything for which an application has not yet been developed.

The attractiveness of the app market is shown by forecasts by Gartner, an information technology research and development company. It estimates the worldwide mobile appstore downloads will surpass 45.62 billion in 2012 and that smart device popularity is driving opportunities for mobile app stores which by 2016 will reach 310 billion downloads and $74 billion in revenue.

Slovak IT companies have not missed the app development train. They develop apps to make the lives of Slovaks easier, but there are also Slovak companies whose applications have millions of users around the world. Some of them develop custom solutions for clients, and others prefer developing applications which they believe will catch on with the wider public. And as the whole world is becoming increasingly mobile, these companies see prospects for further growth and development. But even during these “e-times”, being an application developer based in Slovakia can prove challenging because of the country’s size and location.

“In general, a Slovak developer faces the same challenges as a developer in any other country,” Michal Štencl, CEO of Sygic developing GPS navigation applications told The Slovak Spectator. “This is to create a quality product which is easy to use.”

Štencl admits that being a company from Slovakia has some disadvantages. Sygic had to launch a branch office in Great Britain to sell its application for the Android operating system on Google Play because Google supported paid applications only from developers from certain countries and Slovakia was not on this list.

Ivan Staňo, the head of marketing and partner channel of Resco, agrees that a Slovak mobile development house needs to be prepared to face big obstacles, despite whatever advantages it may enjoy.

“Even though Resco is a 100-percent e-business, i.e. selling its products electronically, we can easily operate globally, but the fact that we are based in Slovakia brings many hurdles: registration on various app stores was a nightmare, access to the latest mobile devices is limited, some B2B customers do not even know where Slovakia is,” said Staňo. “Having a US-based office seems to be an inevitable step Resco is preparing for, as our US customers and partners are growing significantly and there is a need to be closer to them.”

DATALAN, another Slovak software development company, points to another challenge which changes on the market have brought.

“During the last period of time client behaviour changed significantly,” Michal Klačan, CEO of DATALAN told The Slovak Spectator. “Even until recently, developers developed traditional web and desktop applications, but today this is not enough. Thus the biggest challenge is to change the way of thinking, to realise which device and which users the application is being developed for.”

Resco started with mobile app development in 1999, when the company was first established, Staňo recalled. Back then, it was mostly applications for Pocket PCs, Palm and many other prehistoric devices, compared to the modern smart phones that are now used everyday. A couple of years ago, the most successful apps were shareware that substantially increased the user comfort and experience compared to the standard offering of mobile operating systems, such as Keyboard, Photo Manager, Contact Manager and mobile games.

Apart from that, Resco has been producing a tool set that significantly simplifies the mobile app development.

“So a typical user of MobileForms Toolkit is a mobile developer creating a mobile solution,” said Staňo, according to whom in this specific sector Resco is a top player in the global market, with more than 3,500 enterprise customers. During the last three years the company stepped into a new market, mobile customer relationship management (CRM) solutions, which are typical business mobile apps used by sales and service forces out in the field.

Sygic has been developing its navigation software since its launch in 2004.

“At the very beginning there was the operating software Qube OS, on which I was working even before the launch of Sygic,” said Štencl.

He explained that it was an operating system with low requirements put on hardware and thus it ran on an extensive palette of mobile devices. But at the time, when he finished it, operating systems of big brands were arriving on the market, with whom a no-name software could not compete. But thanks to Qube he got into contact with people looking for navigation solutions for mobile devices
and this was the beginning of Sygic.

Sygic has since grown into a prominent IT company. In the latest Technology Fast 50 ranking for 2012, which Deloitte revealed in late October, Sygic placed 27th with a revenue growth rate of 526 percent over the past five years. And it recently registered over 20 million installations of its application on devices running Android and iOS.

According to Štencl, the number of business users, especially logistics companies, truck drivers and producers of navigation devices, is small compared to common users. But in this sector he pointed out that the organisers of the Summer Olympic Games in London chose its software as well as the police corps in Sao Paulo, Brazil, for example.

DATALAN has been on the market for more than 20 years. In late October it won an ITAPA award in the category of New Services with the “City in the Mobile” project it developed with the Bratislava Self-Governing Region. ITAPA is the annual international congress on information technology use in public administration organised in Slovakia every year. It was also on the shortlist of IT Projects of 2012.

“We are trying to transpose trends and innovations from the IT sector into sectors which are of priority for us, [one of which is] public administration,” said Klačan. “The trigger for the development [of the application] was ‘electronisation’ of municipal governments and the services they provide to citizens, linked with extending the usage of smart phones and their growing popularity.”

The City in the Mobile application is part of the solutions family Digital City by which the company follows the trend of having services and information accessible everywhere and anytime. Apart from this application DATALAN has already developed an application for the banking sector called Bank in the Mobile.

The solution was initiated by a bank to respond to the needs of current as well as potential clients, the so-called on-the-go and online generation.

The company also developed a solution for a client from the industrial sphere who uses the system for sharing and administering documents that are available via mobile phones.

Prospects for the market

Apps developers see extensive prospects for the market. DATALAN, which views almost all sectors as having potential, sees a challenge in customisation of services, such as those provided by banks and in health care .

Sygic, which is preparing to enter the Chinese and Japanese markets, sees prospects in partnerships with mobile operators. There are already editions of its application for some mobile operators in Slovakia as well as the Czech Republic. It has been working on a similar project in Asia.

While in the past Resco was active in all sectors including mobile apps for end users (shareware, utilities and games), products for developers and also enterprise-ready mobile apps, now, it solely focuses on the B2B segment.

“We are focusing on developer tools and enterprise solutions, as competing against ‘99-cent-app-developers’ is quite hard and risky in the long run,” said Staňo.

It sees a lot of potential in the CRM industry.

“Not only is the whole CRM industry growing tenfold each year, but mobility within the CRM industry is growing extremely fast as well,” said Staňo. “We believe we have one of the best products from the technological standpoint and are experiencing positive results from our continual R&D investment now.”

Developers derive their inspiration from the feedback of clients, market surveys and visible trends in the market, but also the fulfilment of their own dreams. They develop applications for specific clients but also create applications they believe all clients will find useful.

“We love to design and develop apps that bring value and make users more effective and successful,” said Staňo of Resco, which has gained a detailed overview of how things work, like how end-users react, what the expectations of mobile developers are and also how business customers approach mobility during its so-far operation. ”We also love to dream and have our own attitude towards the mobile industry, and we therefore never do custom development or tailor-made mobile solutions. We prefer to create apps we believe are the best and then market and sell them globally.”

Sygic monitors feedback from its clients, but since development of an application is a long-term process it has to take a visionary approach.

“This is why we have to look ahead, estimate where the market is going and prepare things that users might see maybe after a year and a half,” said Štencl. “Without this long-term view innovation would be impossible. Thus we listen to clients, but with moderation.”