YOU might think that a musician performing as Grace Kelly could only be doing so under a stage name. Yet this is the real name of the 20-year-old US saxophonist who performed at the recent Bratislava Jazz Days. Kelly says the fact that she shares her name with the famous US actress is just a great coincidence. 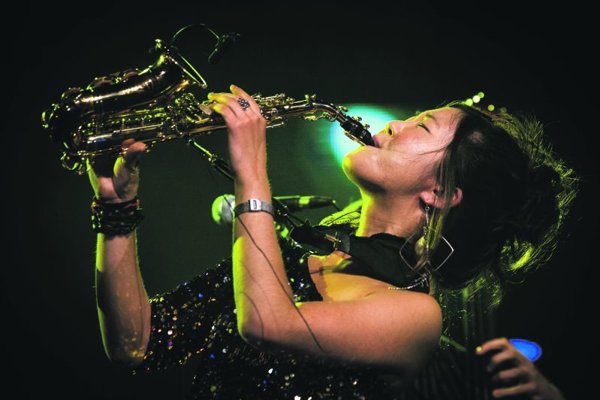 YOU might think that a musician performing as Grace Kelly could only be doing so under a stage name. Yet this is the real name of the 20-year-old US saxophonist who performed at the recent Bratislava Jazz Days. Kelly says the fact that she shares her name with the famous US actress is just a great coincidence.

“Grace Kelly is one of my favourite actresses and I look up to her and what she left on history a lot,” the young musician told The Slovak Spectator.

Kelly was born as Grace Chung, but when she was two years old her parents separated and her mother later met Robert Kelly, who legally adopted her and her sister when she was eight.
The Slovak Spectator spoke to Kelly, who visited Slovakia as part of her European tour, about her first recordings, her gift for composing, and what inspires her music.

The Slovak Spectator (TSS): You recorded your first album when you were 12. How did it happen?
Grace Kelly (GK): My music teacher from school has been my teacher since I was in kindergarten. He had heard some of my original compositions. He was so blown away. He said: “Grace, you have to record a CD. I want you to listen back to the CD when you’re 40 years old and have documented what you were doing when you were 12.” So it wasn’t making a CD in order to have a career. [We only planned] a few songs to be recorded, but it turned into the whole CD. Next year I had written more music, so we worked on another CD. And now I have my eighth CD coming out.

TSS: How did your career affect your upbringing?
GK: People ask me whether I feel like I missed out on my childhood. There are certain things I didn’t do: I didn’t go to my school’s prom and high school graduation, because I left high school early to go to Berklee College [of Music in Boston] when I was 16. But I think, I’ve seen so much of the world, met so many people and it’s amazing for someone of my age to be able to travel, have a career and performances. I feel very blessed to do it.

TSS: And do you regret that you missed out on all these things?
GK: I don’t. No, really. Because I grew up with a lot of great friends. When I am home, I do normal things. My friends know me as Grace. When I’m on stage and have fans, they might think about me differently. But my family and my friends they are just… you know.

TSS: When did you start composing?
GK: I wrote the first song when I was seven years old. I came out with a song which I recorded on my first CD. And I’ve been composing ever since then. It’s a very natural thing for me. I don’t really think of playing and composing separately.

TSS: Where does your inspiration come from?
GK: It comes from everywhere. I wrote one [song] about my ex-boyfriend, one about a phrase, about inspiring moments, or just like feelings that I have.

TSS: Where did you all meet?
GK: I had a great piano teacher who was playing in my piano group before the drummer joined. And he recommended the bass player and drummer for the touring band. There is a different band on the CD because they are very well known as musicians, but they are too busy to go on tour.

TSS: You mentioned that you play piano and saxophone and you sing. How would you describe yourself? Are you more of a piano player, a singer or a saxophonist?
GK: I am not a piano player. I play piano at home to compose my music, but you’ll never see me performing live. Saxophone and voice are my main instruments. I can’t say I am just a saxophone player or just a singer because they are equally important to me.