JAZZ music has many moods – it can be both sunny and mysterious, it can heat up your blood and compel you to dance, or calm you down and make you sway to its rich melodies. It can also bring together those who have dedicated their lives to the genre to enjoy performances by both well-known musicians and younger talents. 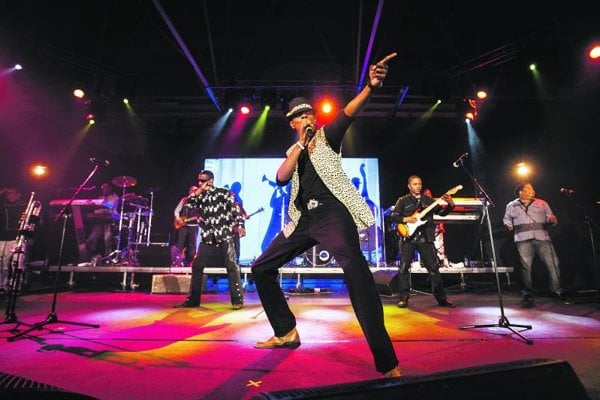 JAZZ music has many moods – it can be both sunny and mysterious, it can heat up your blood and compel you to dance, or calm you down and make you sway to its rich melodies. It can also bring together those who have dedicated their lives to the genre to enjoy performances by both well-known musicians and younger talents.

“People’s paths converge, and today they meet on one stage,” said musician Peter Lipa, one of the organisers of the Bratislava Jazz Days (BJD) festival which took place on October 26-28.
Although he said this when introducing Czech-Slovak band Emil Viklický Trio, his words could be used to describe the entire festival, whose history dates back to 1975. From a small, amateurish event it has developed into a festival with an international standing which this year celebrated its 38th birthday.

This year’s BJD focused on vocal talents, illustrating the important role singing has played in this instrumental-dominated genre.

“Singers are an important part [of jazz music] since they also communicate through [specific] words, not only abstract tones,” Lipa told a press conference on October 1.

The Jazz Days featured musicians not only from the US, the birthplace of jazz, but from all over the world. Vocalists from Sicily and Turkey, in particular, instilled the music with a more exotic sound and demonstrated how jazz’s influence has spread throughout the world.

“Jazz has such a strong spirit and inner power that it has also penetrated strong cultures like China and Japan,” Lipa told the audience, adding that several performers of BJD have recently returned from tours in these eastern Asian countries.

BJD was opened by one of the few instrumental ensembles at the festival, Slovak band FAT breakFAST, which won last year’s SPP Foundation Prize. The band’s performance combined traditional jazz with rock and fusion.

The band was followed by Austrian singer Simone Kopmajer, who with her improvisational style used her voice like another instrument, proving that singing can play a crucial role in any jazz group.
US saxophone player and singer Grace Kelly caught the audience’s attention with her interpretations of older jazz standards as well as her own pieces. The sense of harmony that she generated with her backing band, as well as the sense of humour she displayed throughout her set, made for a lively performance.

“As you noticed, I play a lot of [my] own, original compositions,” Kelly told the audience. “I do it because if they were not played by me, they would not be played by anyone else.”

The evening finished with the performance of Italian singer Mario Biondi, accompanied by The Italian Jazz Players, who fused traditional jazz with Latin rhythms and a whiff of Sicily.

“Today we have four big stars, and this [does not happen] very often,” said Lipa when describing the second evening of the BJD, which featured some well-known musicians who have been setting the jazz world alight for years.

The first to perform was Czech piano player Emil Viklický, who has been playing jazz since the 1970s when he first began performing with the Linha Singers band, according to the SITA newswire. He was accompanied by Cyril Zeleňák on drums and Peter Dvorský on double bass.

Viklický was followed by another legend, Polish saxophone player Zbigniew Namyslowski and his Quintet who, like Viklický, combines traditional jazz with folk and ethnic motifs.

One of the climaxes of the evening was the performance of US singer Dianne Reeves, who has been singing since the 1970s. Over the course of her lengthy career she has won four Grammy awards and sang during the 2002 Salt Lake City Winter Olympics.

Reeves’ performance at the BJD evoked the atmosphere of an intimate French Quarter jazz club, rather than a big hall in Bratislava’s Incheba Expo Aréna.

Reeves was followed by German trumpeter Till Brönner, who rounded out the evening with his cool, elegant style.

Kool & the Gang wound up the audience

Sunday evening featured more vocal performances on Stage A, which was opened by Lucia Lužinská & Boris Čellár Quintessence project. The couple, who have been collaborating for some time, kicked off their diverse set with some Nat King Cole standards. Over the course of the show, they explored other facets of the genre, while their excursions into Latin-jazz received the biggest response.

The further along we got and the more deeply we learned the music, the more we learned about ourselves and our limits, Lužinská told The Slovak Spectator, adding that “the point is that you can get to know yourself better through it”.

The singer said that they have gradually started to play more modern pieces and are even composing their own music.

“The musicians you collaborate with – and the instrumentation – influence the resulting work and the prevailing sound a lot,” Lužinská said.

French singer Pierre de Trégomain, who shifted the show into a more modern jazz mode, was followed by Turkish singer and composer Elif Caglar, whose performance was for some visitors the climax of the evening, and perhaps even the entire festival. Caglar snuck an Oriental influence into her music, while also paying tribute to classical jazz standards, which she sometimes infused with more modern and playful interpretations.

“I think Elif was maybe the best of the three singers [we had today], she managed to captivate the audiences, she made music that circled between the stage and the auditorium, and that involved the viewers,” said Lipa, as quoted by the TASR newswire.

After Caglar finished her performance, the change in the atmosphere was palpable when 1970s and 80s funk-disco-soul hit-makers Kool & the Gang ascended the stage to play the final show of the festival. The audience was ecstatic as the band kept them on their feet and dancing throughout the set.

Although the band still releases new songs, including jazz pieces, the audience wanted them to perform their biggest hits, such as Get Down on It, Cherish, Ladies’ Night, Fresh and Celebration.

“The drive to stay on top, to get publishers to release your albums, especially the new ones,” one of the founding members of the band, Robert “Kool” Bell, told The Slovak Spectator, when asked what has been behind their long career. “We write a lot of new things, but have difficulty getting it out and playing it during concerts, as they all want our old hits.”

Competing on Stage B

For the third time in a row, the smaller Stage B welcomed new, young talents who introduced their music to the packed hall. Six bands were competing both on the internet and during the festival to win the prize of the SPP Foundation and the chance to open next year’s festival. The increasing number of applicants, not only from Slovakia but also from neighbouring countries, is proof of the competition’s popularity, another of the BJD’s organisers, Pavol Daniš, told a press conference.
“During its first year [in 2010] nine bands from Slovakia, the Czech Republic and Austria applied for the competition; last year it was 12 and this year as many as 28,” he said.

Banská Bystrica-based Martin Uherek Quartet won the competition with their performance on Sunday.
In addition to the competitors, the audience also got the chance to see Czech singer Petra Vlková, Swiss big band The Lucerne Jazz Orchestra and young singer Zuzana Mikulová, who performed with the Sanyland band.