SLOVAKS stick to traditions and this may be the reason for high expectations for Christmas spending this year. But while some experts forecast higher Christmas spending, others warn that inflation might play a role in these higher predictions. 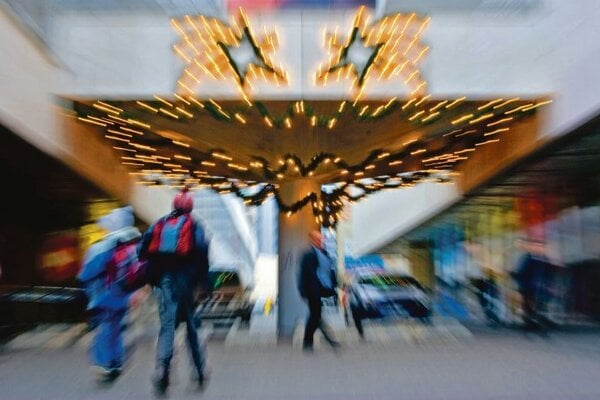 SLOVAKS stick to traditions and this may be the reason for high expectations for Christmas spending this year. But while some experts forecast higher Christmas spending, others warn that inflation might play a role in these higher predictions.

The Deloitte Annual Christmas Spending survey for 2012 released on November 8 predicts that the average amount spent per household in Slovakia will be €522 this year, €85 more than in 2011. The average expected spending of households in 18 European countries and South Africa is €591. The survey predicts that Irish consumers will once again be the highest spenders in Europe this season with €966, while households in the Netherlands plan to spend the least, only €287. Total Christmas spending by people in the Czech Republic will decrease by €81 year-on-year to €426.

“Even though the general outlook of Slovaks is very pessimistic in terms of their expectations for the future - that their incomes will shrink and the situation will worsen - Christmas is important for them,” Ľubica Dumitrescu, senior manager of the tax department at Deloitte Slovakia, said in reference to the results of the Slovak survey as cited by the SITA newswire.

Zuzana Kusá, a sociologist with the Slovak Academy of Sciences, confirms that Slovaks stick to the Christmas tradition.

“A large portion of the public prepares for Christmas festivities in which they indulge, and which they cannot afford during other times [of the year],” Kusá told TV Markíza.

The Association of Trade and Tourism (ZOCR) says that Slovaks’ shopping behaviour is strongly determined by the general economic situation, and expects that even though the total consumption of Slovak households has been decreasing since 2009, Christmas spending will grow this year.

“We expect a moderate increase in the spending for Christmas shopping of an average Slovak household of between 5 and 10 percent, and assume that it will amount to about €500,” František Ťapuš, the vice-president of ZOCR told The Slovak Spectator, adding that the growth of average consumer prices, which increased by 3.8 percent over the first 10 months of 2012, will also require a portion of the spending.

Based on the survey, Slovaks should spend €314 on presents, which is €2 more than the European average. Spending on food is estimated to be €168, which is 3 percent more than last year, but experts attribute this to inflation rather than an increase in purchases.

“Apart from traditional meals, the priority in European families is children, as more than one half of Christmas spending is devoted to children aged three to six,” Dumitrescu specified.

The survey confirmed the trend of purchasing useful gifts, which this year is even stronger than in 2011. In Slovakia Christmas wish lists are topped by books, cosmetics and clothes. Slovaks remain price-sensitive and are also less prone to taking loans to cover their Christmas spending than in the past.

The survey also showed that the internet has become more important as a retail option for Christmas shoppers in Slovakia, while Slovaks use a combination of the internet and brick-and-mortar shops, especially for comparison of prices and goods.

Jozef Dvorský, the executive director of the Slovak Association of Electronic Commerce (SAEC), confirms this and while he did not want to estimate how much Slovaks will spend during Christmas, he believes that this Christmas shopping season will be better than last year’s for e-shops.

“The move [from bricks-and-mortar shops] to online shopping is visible each year,” Dvorský told The Slovak Spectator, adding that exact spending would depend on whether people decide to be big spenders or thrifty because of their financial situation and unemployment.

Kamil Demuth, the project manager of the price-comparison website Heureka.sk, expects a year-on-year increase of between 15 and 20 percent in online Christmas shopping.

In this respect SAEC has registered a change in the behaviour of internet shops which, similar to traditional brick-and-mortar shops, also hold post-Christmas sales.