Modern burial technologies were presented at the Slovak Funeral 2012 exhibition

Slovak Funeral 2012, the first international fair of its kind, displayed for professionals as well as lay visitors, modern technologies connected with funerals. It took place between November 8 and 10 at the Expo Centre fair-ground in Trenčín. 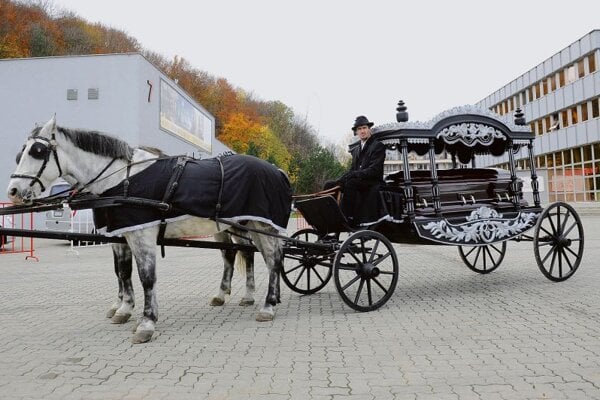 Slovak Funeral 2012, the first international fair of its kind, displayed for professionals as well as lay visitors, modern technologies connected with funerals. It took place between November 8 and 10 at the Expo Centre fair-ground in Trenčín.

Visitors were able to learn about coffin production, and had the opportunity to inspect cremation furnaces as well as cooling, transport and manipulation devices. “I am glad that producers came here to show their products not only to the professional public, but also to visitors of the fairground,” chairman of the Slovak Association of Burial and Cremation Services, Ladislav Stríž, told the TASR newswire. He added that the fair also featured expert lectures covering cemetery management, the process of creating photo-ceramic portraits for headstones and the latest in grave-digging technology. Renovated horse-drawn funeral carriages dominated the fair, and afterwards paraded through the streets of Trenčín. The event also featured a floral competition among secondary schools, as well as the first professional funeral orchestra playing its own music, which was introduced by a composer from Japan.

“Whether we wish to or not, all of us will meet such services – be it during our lives or after death,” Stríž said, adding that the biggest funeral fairs take place in cities such as Paris, Bologna and Warsaw. The SITA newswire wrote that altogether 32 exhibitors from Poland, the Czech Republic, Hungary and Slovakia presented their products and services at this first year of the fair. “I think that for Slovakia, this fair is another positive thing, and this year will not be the last one,” Stríž concluded. “Someone might say that there is nothing interesting about the funeral industry; but you would be positively surprised how much effort exhibitors gave and how they managed to make such exclusive stalls,” he added.