THE CENTRE-right opposition parties the Slovak Democratic and Christian Union (SDKÚ), Most-Híd and the Christian Democratic Movement (KDH), have not yet succeeded in their efforts to have Justice Minister Tomáš Borec’s political future discussed in parliament. A special session was called twice on November 19 and 20 but the house failed to reach the required quorum. The ruling Smer sent just enough legislators to have reached the quorum had all opposition MPs but one been present, the SITA newswire reported. 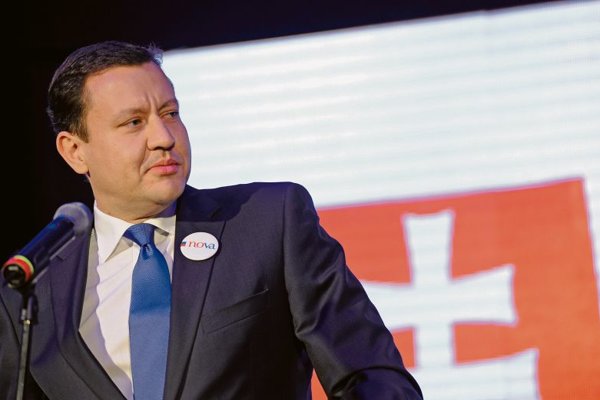 THE CENTRE-right opposition parties the Slovak Democratic and Christian Union (SDKÚ), Most-Híd and the Christian Democratic Movement (KDH), have not yet succeeded in their efforts to have Justice Minister Tomáš Borec’s political future discussed in parliament. A special session was called twice on November 19 and 20 but the house failed to reach the required quorum. The ruling Smer sent just enough legislators to have reached the quorum had all opposition MPs but one been present, the SITA newswire reported.

The three centre-right parties, now united under the banner People’s Platform, which they say is driven by the ambition to offer an alternative to the leftist policies of Smer, wanted to have Borec sacked for what they called his reluctance to support an opposition-initiated parliamentary debate over the state of the judiciary, as well as a lack of action to improve this state.

Prime Minister Robert Fico, the head of Smer, said that the opposition is in decay and it is coming up with proposals to recall ministers as a way to cover up its own problems.

“What nonsense this is; why should we provide the votes and create conditions in parliament so that the opposition can pour a bucket of dirt over our minister,” said Fico, adding that if the opposition lines up all of its 67 deputies in parliament, then they will get 10 Smer deputies and the session could start, TASR newswire wrote.

The opposition argued that the way in which Smer dealt with the attempted session harkens back to the time of former prime minister Vladimír Mečiar, who back in the mid 90s pushed Slovakia to the verge of international isolation.

Nevertheless, the failure to hold a parliamentary session over the state of the judiciary is not the only problem of the right-wing parties, which have been struggling to function as an effective and united opposition in parliament since the elections in March 2012, when Fico’s Smer took control in a landslide victory.

To mark the anniversary of the Velvet Revolution on November 17, the parties of the People’s Platform signed a document that they called a Memorandum for Responsible Politics, with which they set out to “define shared values and programme goals which are the basis of our cooperation”.

The parties listed the following principles: protection of freedom, civil rights and ownership; Slovakia’s stable position within the EU; responsible economic policies; support for improvement of the business environment, with an emphasis on employment growth; support for the stability of the middle class; transparency in politics and the fight against corruption; thoroughgoing justice and the rule of law; solidarity with weak and disadvantaged citizens; protection of the family, marriage and the harmonious development of children; support for the right to choose in education, social and health care; support for patriotism; rejection of nationalism and xenophobia; protection of the legal status of national minorities; and rejection of populism in politics.

The memorandum, signed by KDH leader Ján Figeľ and his counterparts, Béla Bugár of Most-Híd and Pavol Frešo of SDKÚ, attracted immediate criticism from within the right wing itself, with KDH MP Radoslav Procházka calling it an epitaph on the grave of the right wing.

Procházka, who earlier this year established his own ‘platform’ within the KDH, dubbed Alfa, said that the People’s Platform document was the “utmost demonstration of the total loss of orientation and instinct for self-preservation [of the right-wing parties]”. In his blog on Sme.sk he dismissed the memorandum as just a collection of meaningless phrases.

Former SDKÚ leader Mikuláš Dzurinda, noting that he is no fan of Procházka, commented: “but his blog is accurate”.

SDKÚ leader Mikuláš Dzurinda, who was strongly criticised for failing to quit the SDKÚ party leadership before the general election earlier this year in order to give his party a better chance, showered criticism on the new leadership of the party for failing to present an effective opposition, according to SITA.

Political scientist Ján Baránek says that the only positive aspect that he sees in the memorandum is the fact that the right-wing parties expressed some degree of unity.

However, if the memorandum is not filled with actual content and remains in its current general and boring form, then it will remain just a formal document, Baránek told The Slovak Spectator.

What was lacking, according to Baránek, was a joint presidential candidate. According to Baránek, at the moment there is no potential for the right-wing parties to create an alternative to Smer, but that the parties need to be working towards this through a unified proceeding “which will be reflected in important issues and not through meeting somewhere and signing something”.

Political scientist Miroslav Kusý said that the general reaction to the memorandum was that it “is full of political phrases” but lacks concrete details.

As for the chances of the People’s Platform offering an alternative to Smer, Kusý said that when one does the political maths, one must conclude that it will not.

“It would be possible only if the platform stretches to all the opposition parties, but this unfortunately is not currently happening,” Kusý said, adding that the fact that the KDH, SDKÚ and Most-Híd have not tried to involve Freedom and Solidarity (SaS), Alfa or Daniel Lipšic is short-sighted, because in politics it is always strength that counts and people tend to forget about old conflicts.

Lipšic adds his name to NOVA

Meanwhile on November 18, the founding congress of the NOVA party elected Lipšic as its chairman and Jana Žitňanská, a fellow former KDH MP, and Gábor Grendel, his former spokesperson at the Interior Ministry and also a former journalist, as his deputies. The party is now officially called New Majority (Daniel Lipšic), but will use the acronym NOVA.

“Each job contract has to have two parties,” said Lipšic. “We’re offering a contract and the other party should respond.”

The NOVA leader also said that any result less than a double-digit percentage in the next general election would represent a failure.

According to Miroslav Kusý, it is hard to see how either Procházka or Lipšic will emerge from the current situation victorious, concluding “it is only a fragmentation of the political scene”.

Lipšic and Procházka do have the potential to address disappointed right-wing voters, “but this is exactly why there is fragmentation”, said Kusý.

“It will always be a group of disappointed voters”.

An opinion poll published by Focus on November 22 suggests that Daniel Lipšic’s NOVA would collect 2.7 percent of the votes and thus fail to pass the 5-percent threshold necessary for making it into parliament. Smer would get 37.8 percent, followed by the KDH with 10.9 percent, Ordinary People and Independent Personalities (OĽaNO) with 9 percent, and the SDKÚ with 7.6 percent. Freedom and Solidarity (SaS) would collect 7.2 percent, followed by Most-Híd with 5.4 percent. The Party of the Hungarian Community (SMK; formerly the Hungarian Coalition Party) would receive 5.0 percent, according to the poll.