Boór children can return to Slovakia

TWO SLOVAK boys who had been placed into foster care by social services in the United Kingdom can return to Slovakia to live with their grandmother, a British court has ruled. The verdict had been awaited by numerous Slovaks whose interest was stirred by coverage in Slovak media, which had characterised the boys’ case as a ‘forced adoption’. 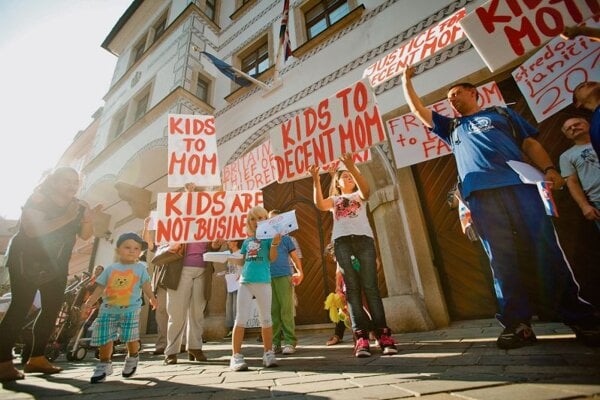 TWO SLOVAK boys who had been placed into foster care by social services in the United Kingdom can return to Slovakia to live with their grandmother, a British court has ruled. The verdict had been awaited by numerous Slovaks whose interest was stirred by coverage in Slovak media, which had characterised the boys’ case as a ‘forced adoption’.

The sons of Ivana Boórová, who were taken into custody by British authorities two years ago, will return to Slovakia by the end of this year, and the boys will be placed in the custody of their grandmother, Eleonóra Študencová, according to the verdict passed by the British court on November 16.

However, Slovakia must first provide some additional documents to the court.

“The British court requested some additional information from the Slovak authorities, such as which nursery school the boys will go to, who their doctor will be and where, and other information,” said Labour Ministry spokesperson Michal Jurči, as quoted by the TASR newswire.

Boórová’s children were seized by social workers on grounds of alleged mistreatment by their parents, who subsequently divorced. Strict legal restrictions in the UK on the reporting of cases involving children mean that the exact nature of the allegations concerning the parents has not been revealed.

The boys were put into temporary foster care by a court ruling on July 19, 2010.

The children’s mother and grandmother then missed a May 2012 deadline for appealing a subsequent court ruling in which a judge refused to place the children into the care of their grandmother and thereby authorised their adoption, the Slovak Foreign Ministry explained in a statement which it published on September 18 in response to media attention to the case.

On September 6, the head of Slovakia’s Centre for International Protection of Children and Youth, Andrea Císarová, who travelled to London after the cases were exposed by the media, appealed the ruling and requested that the court forgive the delay in appealing. On September 18, the court decided to grant the mother another chance to appeal against the previous ruling to allow her sons to be put up for adoption.

The case and associated media coverage caused a wave of protests among Slovaks. Activists gathered around a group created on Facebook to support the Boór family organised by several demonstrations in front of the British Embassy in Bratislava, as well engaging in other actions, such as sending mass e-mails supporting the Boórs sent to prominent members of British society, including the royal family.

The case received massive coverage on the popular TV channel JOJ, which ran reports on it in its prime-time news show, plus talk shows and a documentary movie about Boórová and her sons. The majority of the Slovak media coverage of the case has been sympathetic to Boórová.

In response to reports in the Slovak media, the British Embassy told The Slovak Spectator that the British government “strongly rebuts [sic]” allegations against British social services, saying that “social services in the UK are among the best-regulated in the world” and “any involvement of local authorities is based on full and fair assessments”.